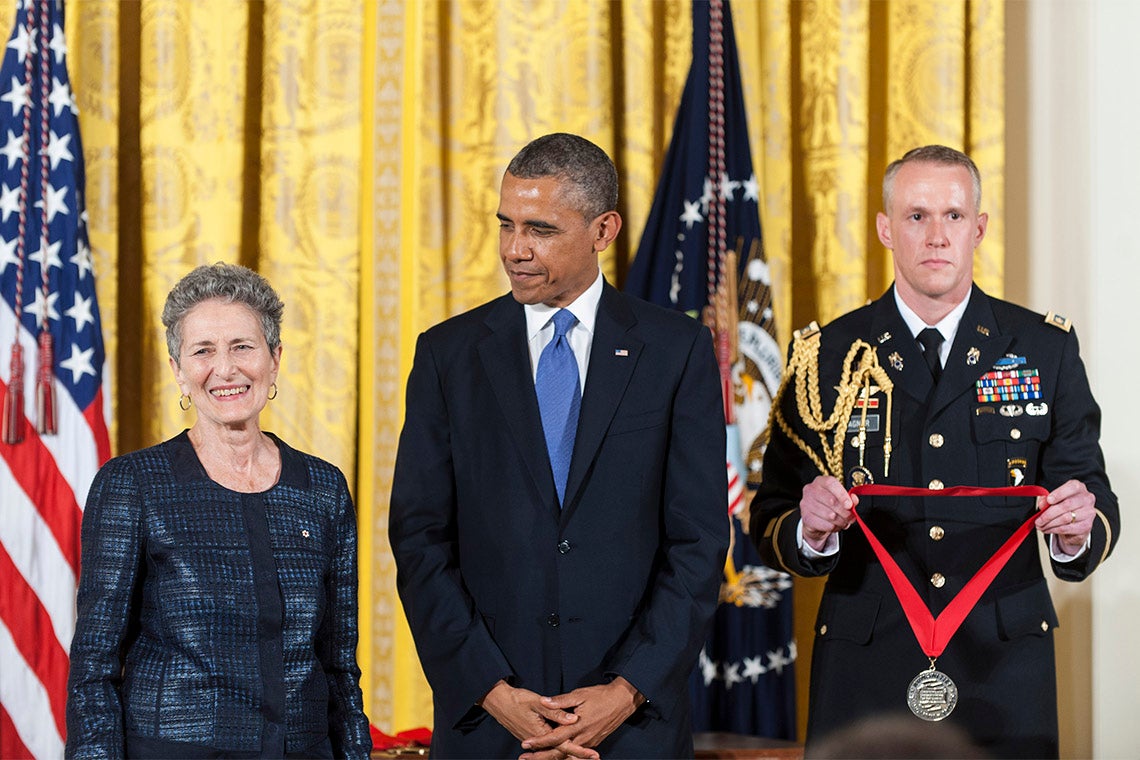 The University of Toronto's renowned social historian Natalie Zemon Davis, of the Department of History, has been honoured with a 2012 National Humanities Medal.

The award — presented to this year’s 12 recipients by President Barack Obama on July 10 — honours individuals or groups whose work has deepened the United States’ understanding of the humanities, broadened its citizens' engagement with the humanities, or helped preserve and expand Americans' access to important resources in the humanities.

“The President spoke of the humanities and hope and his words rang in my ears as he put the medal around my neck, for I have tried my best to be not only a truth-teller about the past, but also to be a historian of hope," said Davis. “I was very happy to be part of an event that celebrated the humanities and the arts, and that recognized the rewards brought to all of us through intellectual exploration, scholarly discovery, and multiple forms of storytelling — from film to song, from poetry to theatre, as well as the historian's prose.”

A citation from the National Endowment for the Humanities says Davis was honoured for her “insights into the study of history and her exacting eloquence in bringing the past into focus. With vivid description and exhaustive research, her works allow us to experience life through our ancestors’ eyes and to truly engage with our history.”

Known for her intensive archival research and her ability to make the past come alive, Davis has not focused on the history of “queens and kings” but rather on those previously ignored by historians — workers, peasants, women and outsiders. (Read more about Davis in the U of T Magazine.)

“Natalie's work extends well beyond her books. As one of the first female professors in the humanities at U of T, she was a trailblazer as well as a mentor to a whole generation of historians, both women and men,” said Robert Gibbs, director of the Jackman Humanities Institute. “Her leadership in the humanities cultivates not just new methods and approaches, but also the intersections and conversations needed to educate the next generation of scholars.”

Kenneth Mills of the Department of History said it “was a great thrill to see an exemplary person and scholar" singled out in this way by her native land.

“Natalie is —and has long been — an extremely rare and precious individual," Mills said. "Her personal curiosity, generosity of spirit and indefatigably connective stance before the world converges with the power and insight of professional contributions driven by intellect, exquisite noticing skills, and historical interpretations."

Davis — who won the prestigious Holberg International Memorial Prize in 2010 and was appointed a Companion of the Order of Canada in 2012 —was born and raised in Detroit, Michigan. She graduated from Smith College and then received her master's degree at Radcliffe College in 1950.

While a graduate student at the University of Michigan —where she her received her doctorate in 1959 — her political activism garnered the attention of the House Un-American Activities Committee, and as a result she lost her passport and was unable to return to France to finish the research for her thesis. Forced to remain at home, she turned her attention to the rare book collections of the United States — an academic redirection that ultimately proved to be very fruitful. As Davis has written, the FBI could keep her from France but not from the books closer to home. (Read her article in the New York Review of Books: How the FBI Turned Me On to Rare Books.)

Davis has been awarded many honorary degrees and her teaching career has taken her to Brown University, the University of Toronto, the University of California at Berkeley, and Princeton University, where she is the Henry Charles Lea Professor of History Emeritus. Davis was also president of the American Historical Association in 1987, the second woman to hold the position.

Christine Elias is a writer with the Faculty of Arts & Science at the University of Toronto.