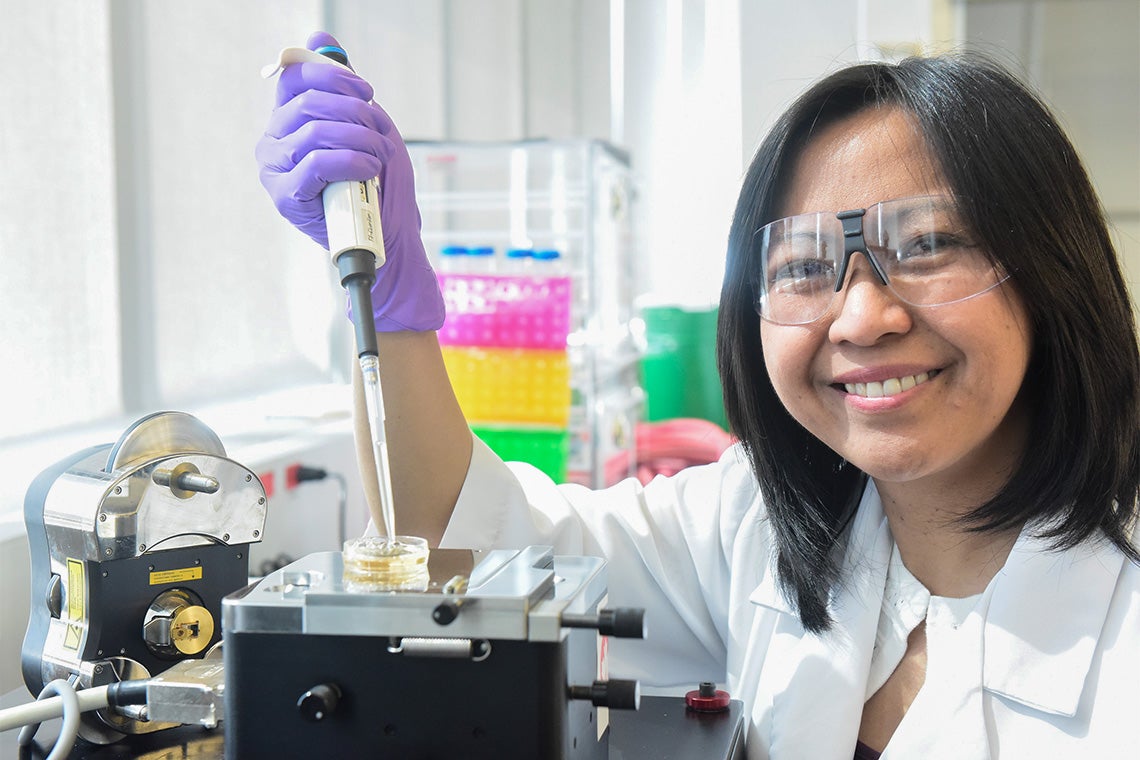 Ruby Sullan, an assistant professor at U of T Scarborough, says her team has designed an approach that can curb the onset of drug resistance in bacteria (photo by Ken Jones)

A new therapy developed by researchers at the University of Toronto may bring us one step closer to effectively killing deadly drug-resistant superbugs.

“The threat posed by pathogens that are increasingly becoming resistant to all known antibiotics is an alarming and pressing health care problem,” says Ruby Sullan, assistant professor in the department of physical and environmental sciences at U of T Scarborough.

“It’s resulting in hundreds of thousands of deaths and billions of dollars in health-care costs annually, so there’s an urgent need to seek alternatives to antibiotic-only therapies.”

The therapy developed by Sullan and post-doctoral researcher Nesha Andoy uses nanoparticles made from polydopamine, a naturally occurring hormone and neurotransmitter that makes it highly compatible with the human body.

The therapy can kill bacteria in two ways. The surfaces of the nanoparticles are coated with an antimicrobial peptide (AMP) that targets and kills bacteria by binding to its membranes and destabilizing them. Since the dopamine-based particles are also highly photosensitive, they are able to heat up when exposed to low-powered laser light, killing the bacteria through heat.

The research is published in the journal Advanced Functional Materials.

Sullan says a major benefit of using these nanoparticles is that it allows the bacteria to be killed at a lower temperature using lasers, leaving the surrounding healthy cells unharmed.

“Since the mechanisms that this therapy use are different from most antibiotics, we envision that they can be designed and developed to target other drug-resistant bacteria,” she says.

Antimicrobial resistance happens when bacteria or fungi evolve to become immune to antibiotic drugs. While Sullan and her team tested this therapy on E.coli as part of their research – some strains can cause serious health problems in humans – it may eventually be used to kill a range of drug-resistant pathogens, including the bacteria that result in hospital staph infections.

“Polydopamine is a well-studied nanomaterial for anti-tumor applications, but our twist is that we used it to target infection caused by bacteria,” she says.

Sullan notes that the therapy doesn’t eliminate bacterial resistance, which is likely impossible. Bacteria were among the first life forms on earth, can be found living in the most extreme environments and will likely survive long after we’re gone.

“The technology we’ve developed is designed to curb the onset in which bacteria resistance develops,” says Sullan, whose research explores bacterial adhesion.

“If we can confuse the bacteria by killing it several different ways, it will have difficulty evolving quickly enough to develop resistance to these different types of mechanisms that can kill it.”

Sullan’s lab is looking at ways to decrease the size of the nanoparticle to make it more suitable for use in living organisms and exploring ways to improve its efficiency. Since the system the team has developed is highly modular, she says it can be modified to change its killing mechanisms, including changing the coating to different antimicrobial agents or loading it with antibiotic drugs.

“That could make a third bacteria-killing mechanism, so it would really enhance it as a multi-functional therapy for drug-resistant pathogens.”

The research received funding from the Canada Foundation for Innovation, Natural Sciences and Engineering Research Council of Canada, the Ontario Ministry of Research, Innovation and Science, U of T Connaught Fund and the U of T Scarborough Research Competitiveness Fund.