NAFTA talks moving ahead is a good sign, say U of T experts 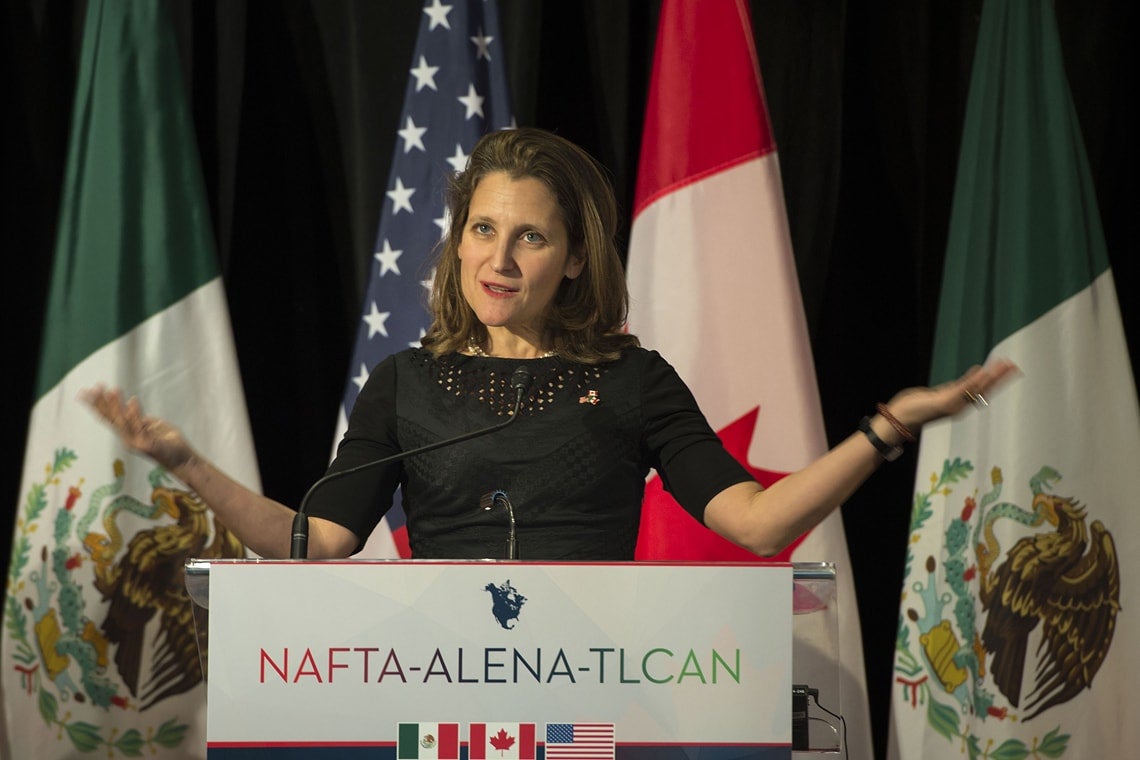 Canadian Foreign Affairs Minister Chrystia Freeland at the closing of the NAFTA meetings in Montreal on Monday. The sixth round of talks ended on a positive note (photo by Peter McCabe/AFP/Getty Images)

With NAFTA talks ending on a more positive note than expected this week, U of T News reached out to our experts on what, if anything, has changed and the challenges ahead for trilateral bargaining.

So does this mean there's hope for NAFTA? 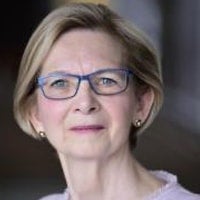 Grace Skogstad (left): I do think it's good news that negotiators for all three countries emerged with something positive to say about the talks. Although U.S. Trade Representative Robert Lighthizer said the pace of the talks needed to be accelerated, he nonetheless also said he was committed to moving forward.

Walid Hejazi: The first thing you learn about negotiations, especially with [U.S. President Donald] Trump, is that you have to let the other person know you're willing to walk away. If they think you're not willing to walk away, they'll use that to their advantage. Trump played hardball at the very beginning, asking for things that were outrageous. I think the Canadian and the Mexican side did exactly the right thing, to say, “Look, we are willing to walk away because the deal that Donald Trump proposed would be really bad for Canada.” The Americans have moved really far in signalling that they’re not as anxious to walk away as Trump indicated initially. This is excellent news for the possibility that NAFTA will be sustained.

What changed? Could Trump be willing to take a new approach?

Grace Skogstad: Canada's World Trade Organization challenge of U.S. softwood lumber duties may have some impact, but I think if the U.S. position is indeed changing, it is because of U.S. domestic pressures and developments. U.S. business groups, including American farm groups, and several Republicans support NAFTA. There is a battle going on within the Republican Party between economic nationalists and free traders, and it may be that the free traders are gaining the upper hand.

In addition, President Trump himself may be feeling a bit more secure about his record. He got his tax reform bill through Congress so he now has a big win. As much as Canada would like to take some credit for the negotiations continuing (because of our trade challenge or because we have shown some flexibility on auto content, for example), I think it is likely U.S. developments are more important factors. 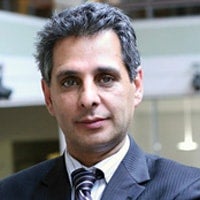 Walid Hejazi (right): The Canadians have played this perfectly. Trump knows we're not going to walk away, and we're not going to cave. The United States is Canada's natural trading partner. We do 75 per cent of our trade with the U.S., not because we like Americans, but because from a profit maximizing perspective, that's the best place for companies to go. But at the end of the day, when push comes to shove, we are not going to dissolve as a country if NAFTA collapses. Trade will continue with the U.S. as it did before free trade, and there's lots of other parts of the world that are growing. I think Trump is realizing that he played hardball, and it didn't work. And Canada and other countries are moving forward with trade, while the U.S. is falling behind. I think there's a realization that the impact of protectionism could hurt the U.S. especially as other countries move forward.

What is Canadian Foreign Affairs Minister Chrystia Freeland and Canada up against when negotiating in these talks?

Grace Skogstad: The biggest challenge, and it is undoubtedly a challenge for U.S. negotiators too, is the inconsistency of President Trump's position on NAFTA. One week he tweets that he could be “a little bit flexible” on withdrawing from NAFTA. The next week he tweets that abandoning NAFTA would be "good."

Walid Hejazi: The real threat was the Americans walking away. It's insane to believe that you're going to put something on the table in which the other side loses, and somehow the other side is going to accept that, which is what Trump's argument was before. So that was the biggest thing Canada was up against – a Donald Trump who makes a decision that economically would hurt the U.S. but politically could help him. But it seems that now that they're allowing the negotiations to go forward, which means that Donald Trump has walked away from that. So, I would call this a victory for Canada. The fact that the American belligerence in these negotiations has been somewhat diminished, the fact that they're allowing the negotiations to go on, shows that the Americans are walking away from the madman strategy.

Have they agreed on anything so far? What is left to resolve?

Grace Skogstad: The media report progress on so called “new issues,” such as digital trade, but there remain thorny issues to resolve. They include the percentage of U.S. content in autos, the U.S. objective of automatic termination of NAFTA after five years, and labour standards. There is also the issue of the U.S. seeking greater access to Canada's dairy market. Canada's effort to show flexibility on NAFTA rules of origin with respect to autos was rebuffed by Lighthizer. I think Canada can't and won't agree to the U.S. objective of eliminating the dispute resolution mechanism. Canada and Mexico are proposing a review of NAFTA every five years, rather than an automatic sunset clause. Agreeing to greater U.S. access to Canada's dairy market may be politically problematic since Canada has already conceded more market share to the EU, under the Comprehensive Economic and Trade Agreement, and the newly signed Comprehensive and Progressive Agreement for Trans-Pacific Partnership (CPTPP, also known as the revised TPP or TPP11). Robert Bothwell (left): Less publicized areas – those that Trump and Lighthizer have not publicly pronounced on – do seem to have shown progress. We know that Trump does not have a head for details, and the more detailed, the less likely to be subjected to his interference.

How could the newly signed and revised TPP impact NAFTA negotiations for the auto sector?

Walid Hejazi: When you bring in the TPP, that's creating a new economic bloc that will be much more integrated and much more efficient, which means a lot of companies that may have located within the U.S. are not going to locate in the TPP region like Canada. With the TPP, Canada looks more attractive because now if you locate in Canada, you can get access to trade with all of the TPP countries. The TPP has been good for Canada but bad for the American bargaining position.

Are Canadians prepared for the U.S. to walk away from NAFTA? What would happen to Canada, its economy, specific industries (auto, dairy) if NAFTA fails?

Grace Skogstad: We have no alternative but to take President Trump's threat seriously. Canada, and in particular, Ontario, would take an economic hit if NAFTA fails. Experts disagree on how big the hit would be, but the governor of the Bank of Canada has stated that we cannot assume it will be “a small shock.”

In the 25 years since NAFTA was signed, Canada has also gained access to other markets through the World Trade Organization, and more recently to the EU. The CPTPP will open up other markets. Even if we cannot replace the U.S. market overnight, I think Canada has taken some important steps to reduce its future dependence on the U.S. market.

Robert Bothwell: There would be considerable pain if the disruption were immediate. More likely the unwinding would be gradual. There is a slight possibility that we would revert to the old free trade agreement that was superseded by NAFTA. Or we could revert to the basic World Trade Organization agreement, which would temper the impact. If Trump denounces that too then the disruption would be serious for a number of years.

For autos, there would obviously be damage, and the result would be to disadvantage those companies who have well-established supply chains. As for dairy, the dairy farmers would weep tears of joy that the threat to supply management – a major U.S. target – has been averted. Are we (Canada, the industries) prepared for that alternative?  I cannot say. It has been 83 years since we confronted the U.S. in any kind of trade war. It would be an unfamiliar experience, but, as a historian, I have to say we survived 70 years of U.S. hostility or indifference from 1866 to 1935.

If I read the comments from Canadians in today’s New York Times correctly, there is a feeling that we should not let ourselves be bullied. That is especially the case with Trump, who is more unpopular in Canada than even George W. Bush.