NAFTA showdown is about Trump needing to win: U of T experts 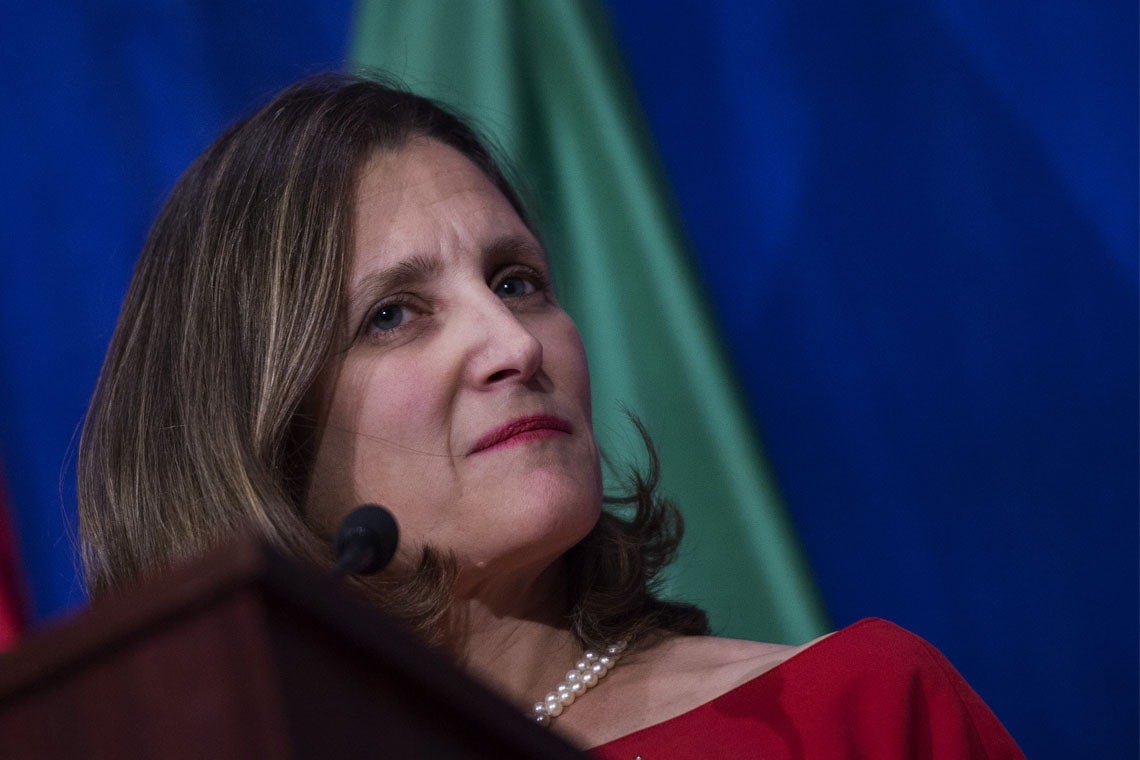 Her counterpart U.S. Trade Representative Robert Lighthizer rebutted that his trade partners, Canada and Mexico, have refused to budge on proposals that would help meet President Donald Trump's objectives of addressing the “huge” trade deficit and returning manufacturing jobs to the U.S.

The University of Toronto's Robert Bothwell and Will Mitchell say they're not surprised by the recent turn of events.

"The U.S. negotiators, pushed by President Trump, are not looking for all-party wins, but are simply playing to what President Trump thinks of as his base, who respond to the idea of protecting U.S. jobs, even though a breakdown in NAFTA will cost many jobs,” said Mitchell, a professor at the Rotman School of Management who holds the Anthony S. Fell Chair in New Technologies and Commercialization.

Bothwell, a professor of Canadian history in the Faculty of Arts & Science and the Munk School of Global Affairs, said psychologically Trump needs “to be seen to win, and nothing short of public and humiliating surrender on the opponent’s part will do.”

Why do you believe the talks are faltering?

Robert Bothwell: They haven’t broken down absolutely. However, very large differences have opened up. That happened in the 1987 Canada-United States Free Trade Agreement too, though the personalities, motivation and issues are rather different.

Will Mitchell: The U.S. negotiators, pushed by President Trump, are not looking for all-party wins but are simply playing to what President Trump thinks of as his base, who respond to the idea of protecting U.S. jobs, even though a breakdown in NAFTA will cost many jobs.

Robert Bothwell: No, unfortunately. The U.S. administration and some of its key members are protectionist by deep conviction. This was clear in U.S. trade representative's statement yesterday – he simply believes things that are either illogical or not factual, or both. So that makes it difficult to negotiate. A further clue was a bizarre article in the Washington Post by the U.S. secretary of commerce some weeks ago that contained assertions that were untrue. There is every indication that Trump accepts that rationale – it keeps coming back no matter how much he is presented with arguments against, or contrary proofs. Psychologically, he requires to be seen to win, and nothing short of public and humiliating surrender on the opponent’s part will do.

Will Mitchell: No. This was a very visible plank in President Trump’s campaign.

What is it about the U.S. proposals (auto and dairy industries, or others) that have been particularly upsetting to Canadian negotiators? Can you talk about what the proposals would have meant for Canadian industries and economy?

Robert Bothwell: The auto sector is still an important economic interest, though I’m afraid less important than in 1993 or 1987. Canada like the U.S. has seen factories and production drain away –  though in some cases to U.S. jurisdictions with low wages and no unions, but mostly to Mexico. Nevertheless, it is in our interest to maintain as much of the current structure and trade flows as we can.

As for dairy, the social motivation is maintaining the fabled family farm. That is not in itself an invalid or unworthy objective. It’s also electorally important in south central Quebec, and in Ontario and elsewhere, wherever they make cheese etc. One solution – offered rather flippantly – is to suggest to the Americans that more of their farmers would benefit if they too adopted supply management. What is irritating about the U.S. demand is that they subsidize their farmers too – but they don’t want those subsidies on the table.

Will Mitchell: This would mainly be a reduction in market size for many industries, as well as frictions in more challenging export-import regulations that would interfere for trade for all three markets.

What now? Without a deal like NAFTA what happens to Canada’s trade with America?

Robert Bothwell: We would revert to the World Trade Organization (WTO) standard, which has quite low tariffs. However, given the American penchant for unilateralism, that may not be a sufficient defence. The record since January shows great volatility, which put more plainly suggests that Trump’s America is not a reliable partner. We can expect opportunistic and capricious unilateralism, and though we care very much about stability and think in terms of mutual benefit, the U.S. administration does not. Incidentally, the signs are very clear that they would prefer bilaterals with two weak partners, each easier to bully, than a trilateral. They may instead end up with two somewhat disadvantaged and embittered neighbours, with consequent security implications, especially in the case of Mexico. A dumber policy, a more self-destructive policy, is hard to imagine.

Will Mitchell: Hopefully, things will get back on track in the next round of negotiations. When even the U.S. Chamber of Commerce is arguing for continuation of NAFTA, there is some chance that the first rounds will go down as posturing, with more fruitful discussions in the next stages. If not, then Canadian businesses have even stronger incentives to seek opportunities in Europe, Asia, and elsewhere. Canadian firms – with support from Canadian trade policy – need to become more global, learning how to compete beyond the northern part of North America. Some have been highly successful (for example, Thomson Reuters, ScotiaBank, Manulife). Others need to be more aggressive in recognizing that Buffalo is not global.