Much Ado backstage: how a science grad landed at U of T’s Hart House Theatre 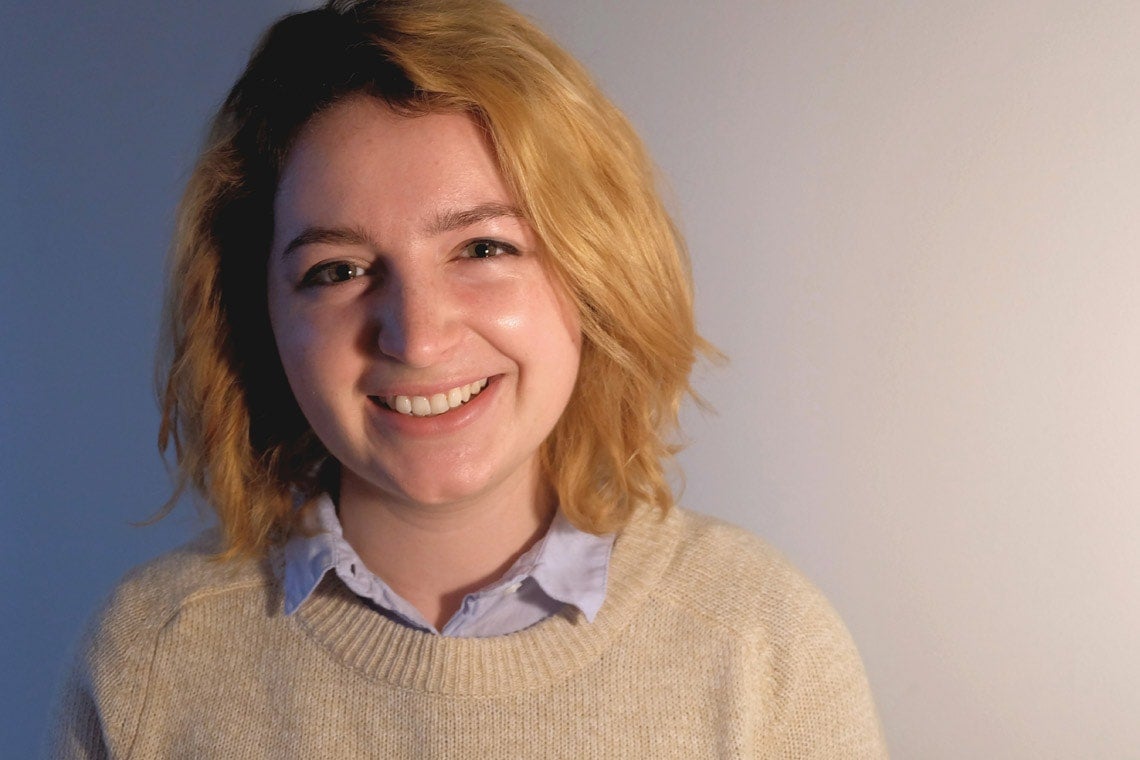 Lucy McPhee entered U of T with wide eyes and an ambition shared by many undergrads: to become a doctor.

So how did the double major in biochemistry and neuroscience, who graduated last June, end up as the stage manager of Shakespeare’s Much Ado About Nothing at the Hart House Theatre?

She says the migration from laboratory to stage was gradual. She was fine with science coursework but less enamoured of the data-input duties that clinical studies entailed.

“It’s very hands on,” she explained backstage. “That’s what I really like.”

Feeling nostalgic for the extracurricular theatre and choir activities she enjoyed in high school, McPhee approached the Hart House Theatre late in her second year. As a University College student, she also volunteered for the UC Follies. But not as a performer.

“I don’t like being on stage in front of people at all,” McPhee said. “I don’t want to be looked at. But I really like being part of the production and seeing all the parts that make it work.”

McPhee thinks her grounding in science helped her as a young theatre professional.

“You have to have time-management skills,” she said. “In labs, it’s all about recovering information, knowing what has happened at every moment. So when you write the lab report you can say, ‘Oh, at this time it was like this.’

“It is similar in the theatre. You have to know that in this scene, at this time, this person is standing here. And they have this prop, and they’re wearing this costume.”

While the position of stage manager might conjure an image of someone scurrying behind the curtain and yelling “five minutes!,” McPhee in fact spends much of her time at a control panel.

As an assistant stage manager she became well acquainted with on-stage mishaps, including wardrobe malfunctions. Duelling and scuffling were abundant in the 2014 Hart House production of Ann-Marie MacDonald’s Goodnight Desdemona (Good Morning Juliet).

“So many Shakespearean doublets,” McPhee recalled. “I probably sewed every button on.”

While the director is formally in charge during rehearsals, the stage manager has the unstated duty of making sure that people are present and paying attention.

“After the show starts running, it becomes your show,” McPhee explains. “In some professional situations, they have a formal handing over for duties, with everyone on stage.”

Personal interaction, in McPhee’s view,  is what most distinguishes the theatre from the laboratory.

“This aspect doesn’t really exist in the sciences,” she says. “It’s very much a solitary field. I’ve always liked working with people.”

Her philosophy: respect begets respect. “Some people believe that actors are like children and have to be coddled. I think if you treat people like adults, they’ll step up to that.”

“She gets the job done with a quiet confidence that builds trust with a company. This is what the very best stage managers do. Lucy has that gift.”

He also regards McPhee as part of the Hart House Theatre family.

“Lucy as a student fully immersed herself into the environment. She had the opportunity to work with some really terrific stage managers and absorbed that information and know-how like a sponge.

“Drama or theatre may not have been part of her academic pursuits at U of T but she left learning a trade, a craft. This is experiential learning at its best.”

"Much Ado About Nothing"  plays until Nov. 19 at the Hart House Theatre.