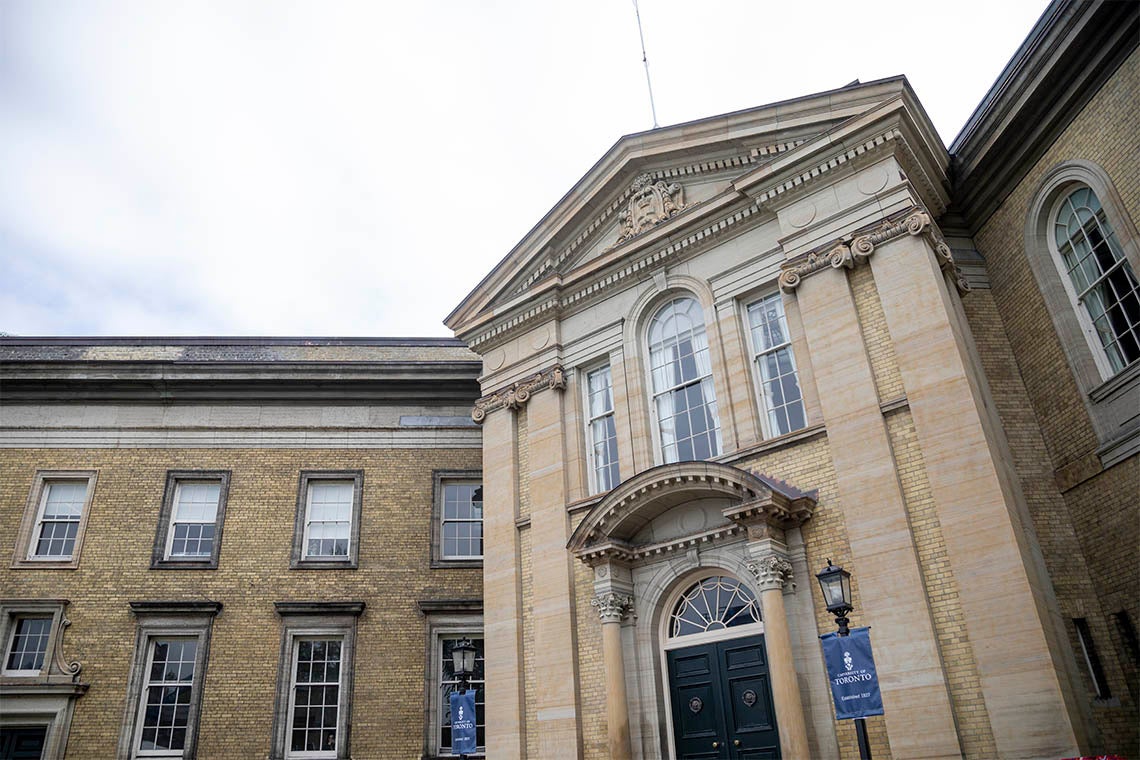 “We take tremendous pride in our role as caretakers of Simcoe Hall, Convocation Hall and the other architectural jewels of our campus,” says U of T's Scott Mabury about the cleaning of the buildings taking place now (photo by Nick Iwanyshyn)

If you’ve walked through King’s College Circle lately, you may have noticed something different about the exterior of Simcoe Hall: gleaming yellow brick where there was previously an ashen façade.

That’s because Simcoe Hall and the adjacent Convocation Hall – the 112-year-old building, site of an important rite of passage for generations of University of Toronto students – are getting a cleaning.

The job is a delicate – and high-profile – one given the age of the structures, which are among the most recognizable heritage buildings on campus. The work will be paused for spring convocation and other events, but is set to resume in July.

“We take tremendous pride in our role as custodians of Simcoe Hall, Convocation Hall and the other architectural jewels of our campus,” says Scott Mabury, vice-president of university operations and real estate partnerships.

“That’s why we make sure we’re working with the right people to ensure that we’re maintaining our heritage buildings the best we can.”

The restoration project began by enlisting external expertise in buildings sciences and restoration. Next, a series of tests on mock-ups and on inconspicuous patches of brick on non-visible areas of the buildings were carried out by heritage restoration specialists.

After experimenting with different approaches – from the composition of cleaning materials to the pressure levels of compressed air and water – restoration specialists working under the guidance of consultants settled on different methods to use based on the type of brick, says Ron Saporta, chief operations officer of facilities and services.

He adds that these methods are widely used in the heritage building maintenance world.

“It’s important that we bring in specialty consultants and contractors to give us advice on this,” Saporta says.

“They advise us on the methodology based on the specific condition of the building, and they continually do site reviews and monitor the progress of the work.”

With more than 50 heritage buildings on its three campuses, and another 30 owned by federated colleges, U of T is a major steward of the city’s historic structures, working closely with the City of Toronto and observing best practices and standards for the care of the buildings.

“Being a lighter colour, these bricks may be more vulnerable to staining than a darker-coloured brick, but that also makes them more dramatically good-looking when you clean them,” Saporta says.

“That’s because they were two slightly different looks of bricks to begin with.”

There are even variations in the texture of bricks within the façade of Simcoe Hall itself, notably on the west elevation of the building, which has yet to be cleaned.

The bricks have a coarseness to them that pre-dates the cleaning process, so crews working their way through each elevation must continually adjust their cleaning methods to account for differences in brick texture.

Another important element of the cleaning effort was the removal of ivy draping the outside of the building. While the foliage lends a distinguished aesthetic to campus buildings, it comes at a potentially high cost.

“Ivy on a heritage building can cause a lot of surface damage,” says Patrick Brennan, senior property manager. “The removal of ivy makes the building look a little different than it may have looked in the past, but it’s the right thing to do to protect the brick.”

Once the time-consuming work is completed, it will likely be many years before Simcoe Hall and Convocation Hall are due for another cleaning.

“The due diligence taken in caring for Convocation Hall in particular speaks to the pride and seriousness with which we take our responsibility as stewards of our heritage buildings,” says Mabury. “As the site of convocation ceremonies, lectures and so many other momentous events for over a century, Convocation Hall is truly a bridge to our past.”

“Our careful efforts at cleaning and heritage conservation will ensure that we carry forward that connection to future generations of U of T students.”