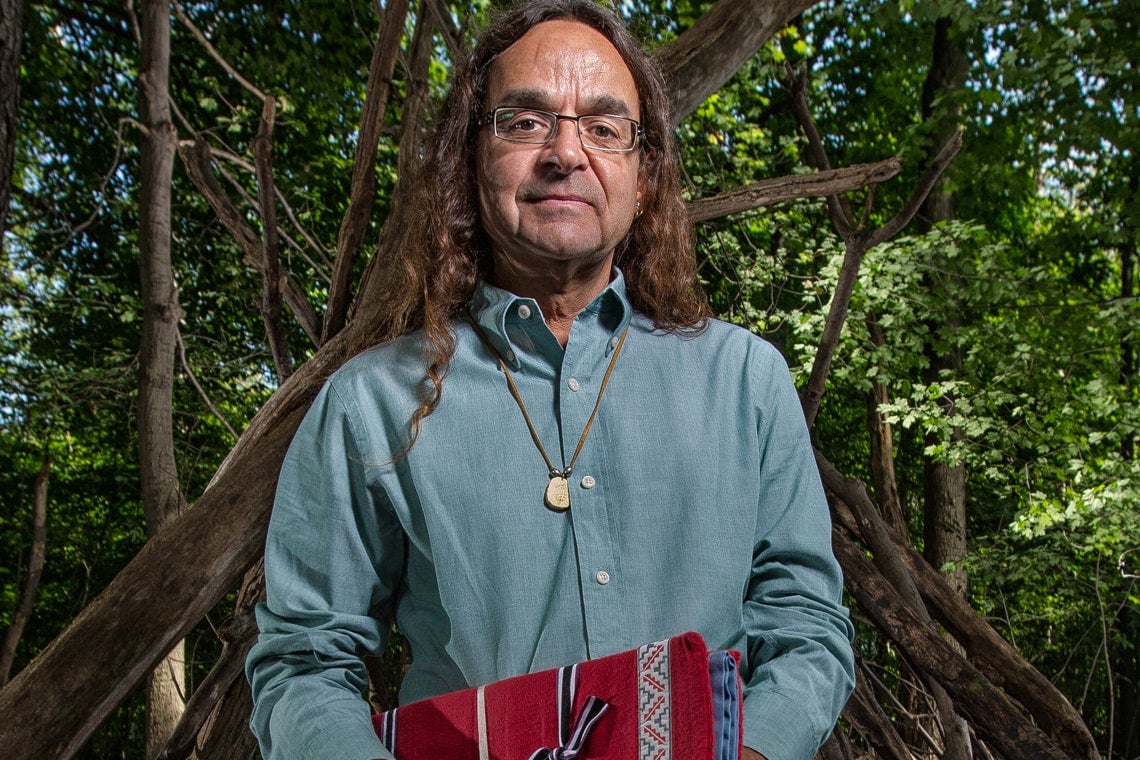 Conducting teaching circles is a major part of Cat Criger's role as Traditional Indigenous Aboriginal Elder at U of T Mississauga.

As an Indigenous Elder, his role includes performing traditional ceremonies, guiding the community, healing, counselling and advocacy. He draws upon the Indigenous tradition of freestyle learning to give students of diverse backgrounds an awareness of the First Nations' belief system. Typically up to 30 students, both Indigenous and non-Indigenous, gather for his two-hour seminar – either indoors or outdoors.

“We discuss traditional cultural teachings, and how they apply to your path in life,” says Criger. “We may discuss how a snake sheds its skin in order to get rid of scars and move forward in life, or we may discuss the meaning of a full moon.”

Criger, 61, was born in St. Catharines, Ont., to a Cayuga Six Nations father and a German-English mother.

“I have mixed DNA, which allows me to connect with many cultures,” he says.

His father served in the Canadian Armed Forces, and the family was posted to West Germany during much of Criger's childhood. They also travelled throughout central Europe and the UK.

Once back in Canada, the family moved from military base to military base.  While they were stationed in Manitoba, Criger recalls being beaten by his public school teacher for having greeted him one day in Cree. But, his father taught him to stand up for himself and take pride in his heritage.

After graduating from high school in Petawawa, Ont., Criger attended community college in Toronto in the late 1970s, studying digital communications. He then worked for Litton Industries, a U.S.-owned defence contractor, specializing in missile technology.

“It was rocket science,” he says. “It was an unusual background for an Indigenous kid.”

By the early 1990s, recalls Criger, “attitudes in Canada towards Indigenous people had changed, and it was cool to be native. I needed to know more about my culture.”

He quit his day job and apprenticed with an Ojibwe Elder.  They travelled widely together and spent time with elders of other tribes.  Usually, elders are trained within their own tribe, but Criger had the benefit of an inter-cultural experience. At age 40, he received his spirit name Makwa Giizhigad or Sun Bear in a ceremony performed by an Ojibwe Elder from Minnesota.

In 2002, Criger accompanied a friend to an Indigenous studies class at the University of Toronto.  Afterwards, the professor invited him to give a guest lecture. That's how his association with U of T began.

He became an Elder-in-Residence and sits on U of T's Council for Aboriginal Initiatives.

Criger now spends four days a week at U of T Mississauga. He estimates the campus has 20 to 30 Indigenous students. Some don't self-identify, he says, because “they're shy to be singled out as the 'token Indian' in the class.”

He and Ken Derry, associate professor, teaching stream of religious studies, co-chair a task force on supporting the Indigenous experience at U of T Mississauga. They are hoping to expand the campus' Indigenous Centre, encouraging more interaction between Indigenous and non-Indigenous students.

“It's a relationship-building concept,” says Criger.