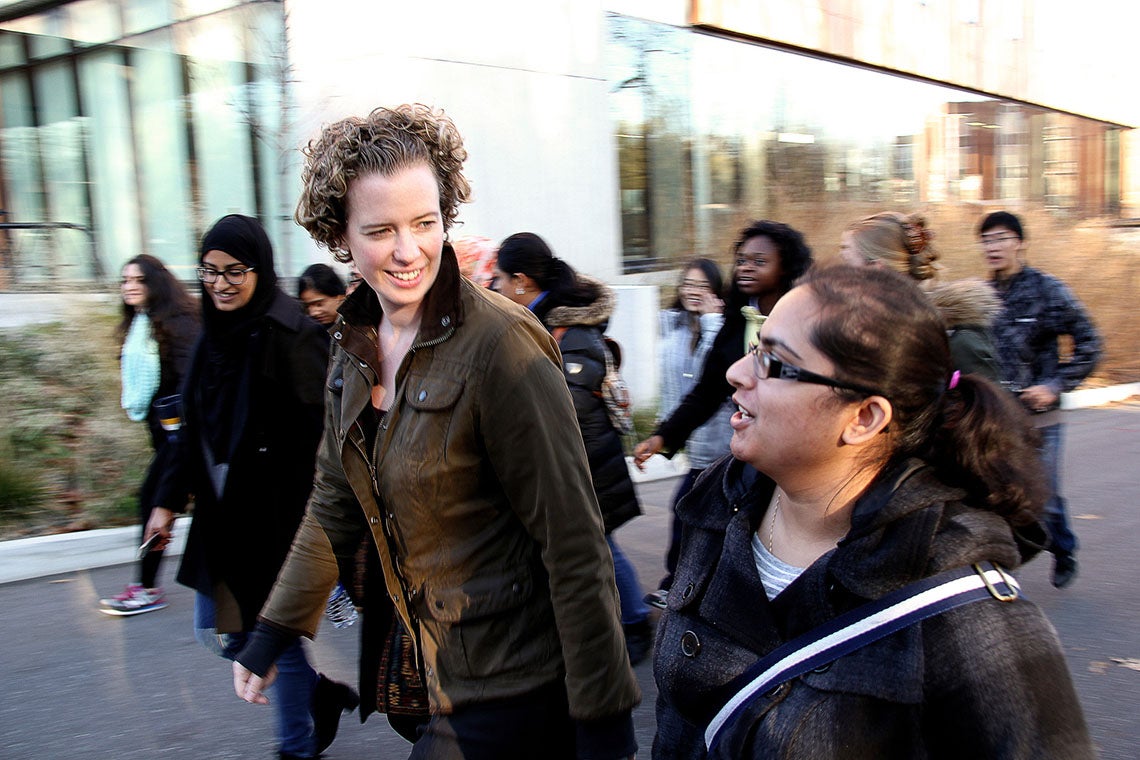 “Our students deserve to be taught in ways that are shown to be effective, that are engaging and exciting and linked to the real world,” says U of T Mississauga's Fiona Rawle (photo by Blake Eligh)

One faculty member has a policy never to lecture for more than 20 minutes at a time; the other has students understand DNA in a very physical way.

Two University of Toronto associate professors have been named among Ontario’s outstanding university teachers by the Ontario Confederation of University Faculty Associations (OCUFA).

Founded in 1964, OCUFA represents 17,000 faculty members and academic librarians in 29 faculty associations across the province. The annual awards recognize exemplary contributions made to the quality of higher education in Ontario.

"Michelle Craig has a long and distinguished teaching record and demonstrates contagious enthusiasm for her work," says Judy Bornais, chair of OCUFA’s award committee. "Her impact extends well beyond her classes, with both students and fellow faculty members viewing her as a mentor.

“Fiona Rawle is a passionate teacher whose enthusiasm for the field of biology excites her students and encourages them to dive deeper,” Bornais adds. “She believes in fostering critical thinking and using active engagement to help students improve their understanding of the subject matter.”

Rawle, who is also associate dean of undergraduate education at U of T Mississauga, says that winning the OCUFA award “really enforces for me how lucky I am to have the colleagues and students that I have. Everything we do in the context of teaching and learning is collaborative; it’s a partnership.” Craig (pictured left) is equally honoured to receive the award. “It’s satisfying to have my work recognized,” she says.

A native of Puslinch, Ont., outside of Guelph, Craig has an undergraduate degree in systems design engineering from the University of Waterloo and a master’s in computer science from U of T, where she focused on artificial intelligence. She is an avid runner who has run the Boston Marathon and swims regularly in Lake Ontario with a local open-water swimming group.

She joined the computer science faculty in 1990 and teaches undergraduate courses. She’s also deeply involved in the relatively new field of computer science education research, looking at how people learn computing and the best way to teach it so that it is understood. She sits on the board of directors of the Special Interest Group on Computer Science Education.

Craig’s work in the field includes a project that analyzed the repetitive patterns that knitters use, applying some of their principles to the instructions given to beginner computer programming students. In another, she added “wrappers” to marked exams handed back to students, asking questions about things such as the effectiveness of their preparation strategies, particularly given their results.

She says that doing such research gives her an opportunity to mentor individual students involved in the projects and it is “very relevant to my job. I think it makes me a better teacher.” She feels strongly about active learning in the classroom as opposed to the old-model “sage on the stage” – standing at the chalkboard or computer. It is why she never lectures for more than 20 minutes at a time.

“When you teach someone something, you have to ask them to do something with the information you just told them,” explains Craig, who has applied that principle by “flipping” or “inverting” some of her courses such as second-year Software Tools and Systems Programming, with two sections of 120 students. Before each class, they watch a series of videos that she prepared, then in the classroom they complete exercises together and “you see the lightbulbs going on,” she says. “It’s wonderfully fun to see people suddenly understanding something they came in not understanding.”

Rawle embraces active learning in the biology classes she teaches, even her massive first-year Introduction to Evolution and Evolutionary Genetics course, with 1,100 students. In one class, she gets everyone to stand up and adopt the orientation of a nucleotide – “the left hand becomes a phosphate group, the back becomes a sugar and right elbow becomes a base" – so that everyone can “bind together” to form one long DNA molecule.

The exercise helps them understand the principles of DNA, she says. “In the final exam, I'll even see students extending their hand and elbow in that same configuration to check they have the structure right.”

Rawle grew up on Vancouver Island, where a life in the outdoors got her interested in science, nature and animals. She earned an undergraduate degree in genetics at the University of Victoria and McMaster University, received a PhD in pathology and molecular medicine at Queen’s University and then came to U of T Mississauga in 2010. She’s an avid hiker and traveller and plays volleyball.

A “full-fledged science geek,” she was especially drawn to the classroom by a desire to “spark kids’ curiosity” to solve global problems such as climate change and antibiotic-resistant bacteria. She was also determined to address misconceptions surrounding those issues, and is currently researching how to educate the wider population about science.

She’s working on a project on “productive failure” and tells her students that “it’s okay – even great – to fail,” with examples in science from the discovery of penicillin and the development of anesthesia to the invention of the pacemaker and the slinky.

She maintains that “science is creative” and is determined to take a scientific approach to teaching it.

“Our students deserve to be taught in ways that are shown to be effective, that are engaging and exciting and linked to the real world,” Rawle says. “I don't want my students to remember lists of facts. At the end of the day, I want them to be able to ask questions and find answers.”