Martin Luther King, 50 years after his assassination: George Elliott Clarke on how to carry on the movement 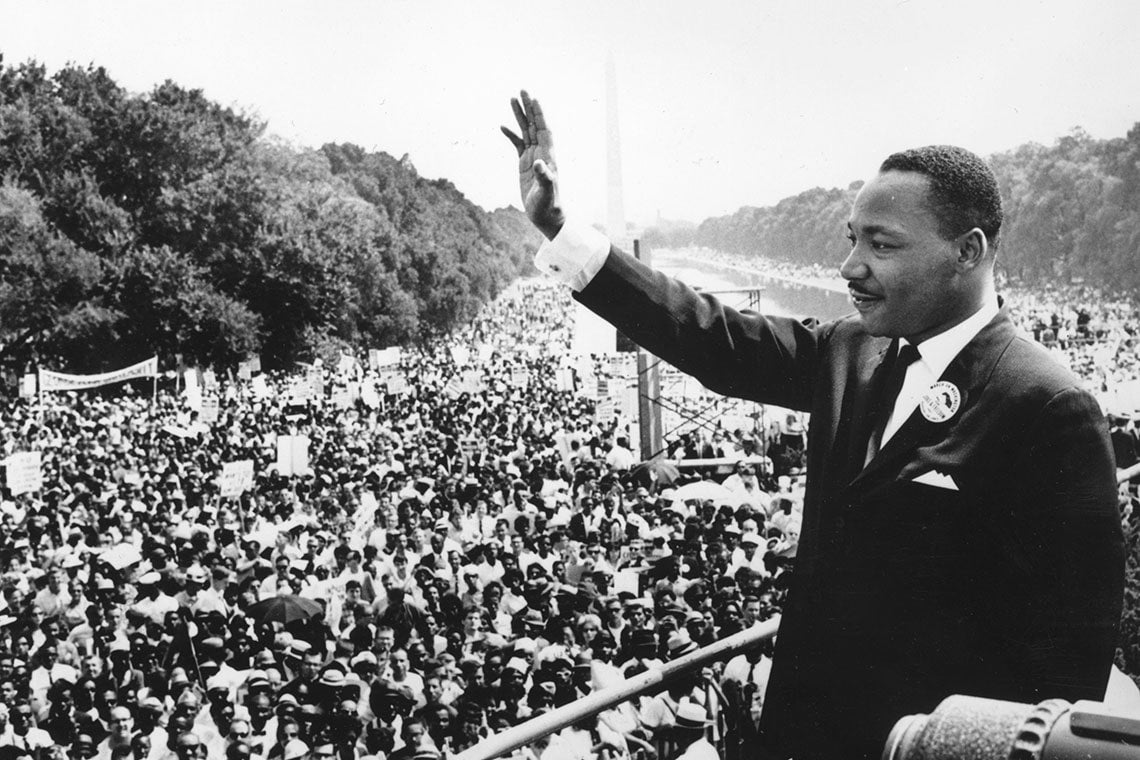 American civil rights leader Martin Luther King addresses crowds in 1963 during the March On Washington at the Lincoln Memorial, where he gave his "I have a dream" speech (photo by Central Press/Getty Images) He says that even as Americans and Canadians today consider King's “I have a dream speech,” we need to embrace the message behind the words and launch another mass movement for change.

“You need to have a grassroots movement of the type that King inspired, a mass movement that would bring together Black Lives Matter, #MeToo, folks opposed to wanton gun violence,” said Clarke (pictured right).

“That would be the real legacy of Dr. King – to have that kind of mass movement sparked and active right now.”

What is Rev. Martin Luther King's legacy? Where are we today with race relations?

As we look at 50 years, half a century since the assassination of Dr. King, I think that just as we often celebrate the “I Have a Dream speech,” it’s really important to focus on his entire legacy.

It was a legacy rooted in the struggle for liberation and also involving concepts that he borrowed from Mahatma Gandhi, in terms of Mr. Gandhi’s successful drive to achieve independence for India and simultaneously Pakistan when those two nations were born out of the beginning-of-the-end of British imperialism.

It is very significant that Dr. King adopted the strategy of non-violent mass resistance and civil disobedience from Mahatma Gandhi in order to encourage millions of African-Americans, especially those in the south of the United States, to struggle for their basic human rights and their civil liberties. Because of that, he was able to lead a successful revolution. He was able to move masses of African-Americans from a state of near peonage, from a state of being violently oppressed via police and other instruments of state power into positions of equality, greater power, dignity and decency.

His movement was revolutionary, and he did liberate millions of people from peonage, slavery-like conditions, from experiences of inhumane treatment, attacks on their dignity making it possible for them to dream of rising as high as their talent would allow them to, including becoming eventually president of the United States. In all of history, not many people get the right to call themselves liberators.

Like Mahatma Gandhi, Martin Luther King is one of the very few who can talk about liberating people. It is one thing to become the leader of the country, to be a prime minister, president or king or dictator for that matter. It is another thing to move millions of people from conditions of pseudo-enslavement to the possibility of living decent lives with the opportunity of economic advancement and even attaining social prestige. King achieved all that. It cannot be understated. He is a true hero for anyone interested in liberating people from conditions of poverty, illiteracy and oppression.

At the same time, at the point of his death he was organizing what became known as “Resurrection City.” The radical idea was that poor people, black, brown, white, yellow from across the U.S. would descend upon Congress and physically occupy the monuments, the buildings in order to impress upon legislators that they needed to have resources redirected from the Vietnam War to uplift millions of Americans from positions of poverty to middle class status. Some scholars believe that it was because of King’s radical agenda in the spring of 1968 that he was eventually assassinated. There are still questions about how James Earl Ray received the money and weapons to carry out the assassination and the connivance perhaps of various branches or a branch of the U.S. government that permitted or encouraged the assassination to take place.

I do think it is important to remember that King did not die simply as a liberal speaker of liberal nostrum of equality and dignity and humanity, but he died as a champion of freedom and equality of poor people. He was simply a Christian humanist who really tried to put those principles into play in a society that viewed itself as being about Judeo-Christian values and humanitarian values. At the time he was struck down by an assassin’s bullet, he was challenging that and calling people to task for their hypocrisy. Martin Luther KIng (third from left) and other civil right leaders during the March on Washington on Aug. 28, 1963 (photo by AFP/Getty Images)

Have we realized King's dream of racial equity?

King realized some success in terms of opening up the American political process to a more African-American representation, which meant that we finally had a chance to put a lot more Black people in Congress, have a lot more Black people become senators and governors, and even president. He also made it possible for more Black Americans to become middle class, to become professionals, to build businesses. But to a certain extent, the agenda of equality was also short-circuited by the apparent success of the civil rights movement.

Because folks could see there was visible change, it was possible for people to say, “OK, we have accomplished King’s dream. We’ve gotten there. We’ve made it to the promised land.” At the same time that that’s true, there is persistent inequality, underemployment, unemployment, as well as racist behaviours, especially on the part of police forces versus Black youths and Black men in particular. It might sound incendiary, but if you’re a Black American – especially Black male, especially young Black male – and you do not feel that you have the right to move unhindered and unhampered through a city street, drive down a particular road, buy a house wherever you might be able to afford, or aspire to ascend in whatever institution or organization in which you find employment, and if you feel like your life is in constant jeopardy because someone might feel that you are not where you are supposed to be and they can get away with shooting you – whether it’s an armed citizen or a police officer – then you’re still living in a police state.

This is where the teachings of Malcolm X continue to haunt the dream of Martin Luther King Jr.

While it’s extremely important to have that dream, and work for that dream, I think it’s also important to maintain a degree of Malcolm X realism, that some people who have power and privilege don’t want to give it up and are quite prepared to continue to oppress others “by any means necessary” in order to maintain their own hegemony, their own high status within society. For that reason because of the entrenchment of notions of white supremacy, including the idea that Black people should not be permitted to occupy high office, earn high employment or enjoy high status outside of stereotypical entertainment and sports, it has left people feeling they are still in an unequal position. Keeping in mind that the election of someone who seems to be as president of the United States, quite OK with notions of white nationalism or white supremacy or simple racism against African-Americans, Latinos, Muslims – 50 years after King’s assassination this should also suggest that the dream of real equality and real liberty for all has not yet been achieved.

I would say this is a terrific moment now as we focus on this anniversary, especially for Americans of all backgrounds, to think about rekindling a mass movement that would bring together anti-sexist, anti-homophobic, pro-environmentalist, the anti-gun lobby, progressives and everyday citizens in the United States to turf out all the politicians who represent a backward, regressive, inhumane, environmentally destructive agenda. Vote them all out. Clean house and do it while chanting, “Remember Dr. King, Remember Dr. King.” In order to do that, you need to have a mass movement. You need to have a grassroots movement of the type that King inspired, a mass movement that would bring together Black Lives Matter, #MeToo, the folks opposed to wanton gun violence.

That would be the real legacy of Dr. King to have that kind of mass movement sparked and active right now. If anybody really want to get rid of what people consider regressive backward Republicans, they need to start educating the electorate now.

How should we embrace his message now, especially with the rise of white supremacists?

Look, the whole planet went through 500 years of white European control from the beginning of the 16th century to the beginning of the 21st century. That European Caucasian control of the entire planet, economically, politically and militarily, it had to include notions of white supremacy. Even though many nations are now free of obvious European control and are able to enjoy more self-determination, it doesn’t mean that the underlying ideology of white supremacy has disappeared. It’s still here. We see it in terms of carding here in Toronto where police officers want to stop somebody who happens to be brown or Black, and ask them to explain why they are where they are. This is because of the white supremacist view that Black people especially shouldn’t be able to enjoy freedom of mobility. Even though slavery is long over, it doesn’t mean the attitude that Black people should not be able to move freely has disappeared.

Same with stopping people for driving the wrong kind of car or living in the wrong kind of neighbourhood. The idea behind those notions, right here in Toronto, right here in Canada, is that Black and brown people should be poor. They should have to always justify their possessions, whether it’s an expensive car, expensive house or expensive neighbourhood by essentially demonstrating that we’ve been permitted to have these items because we’re understood to be OK, because otherwise we should be somebody’s employee, somebody’s peon, we should be somebody’s “slave.” Those attitudes, even though they’re not often voiced, still persist in our society. Canada, like the United States, was a slave-holding society. Just because we got rid of slavery, or the British Empire did in 1834, doesn’t mean that the attitudes that supported slavery disappeared. They’re still there. Just like the attitudes that oppressed Indigenous people. Residential schools may be long gone – that does not mean that the attitudes that allowed for residential schools have disappeared. Even though there may be physical advancement, progress, people are not walking around in chains anymore, people aren’t forced at gunpoint to do this or that, it doesn’t mean the underlying attitudes have disappeared.

That’s the struggle that exists now. If we really want to have real liberty and real equality, we have to overthrow all these notions that justify white privilege and white power.

I value being in Canada. I value the multicultural nature of our society, and I think we are going to become more and more multicultural, more and more hybrid, a Métis society. I think that is our future, a beautiful future that we need to nurture and protect, especially since the country adjacent to us seems to be going rapidly in the wrong direction.