Male black widow spiders piggyback on the work of their rivals to find female mates faster: U of T study 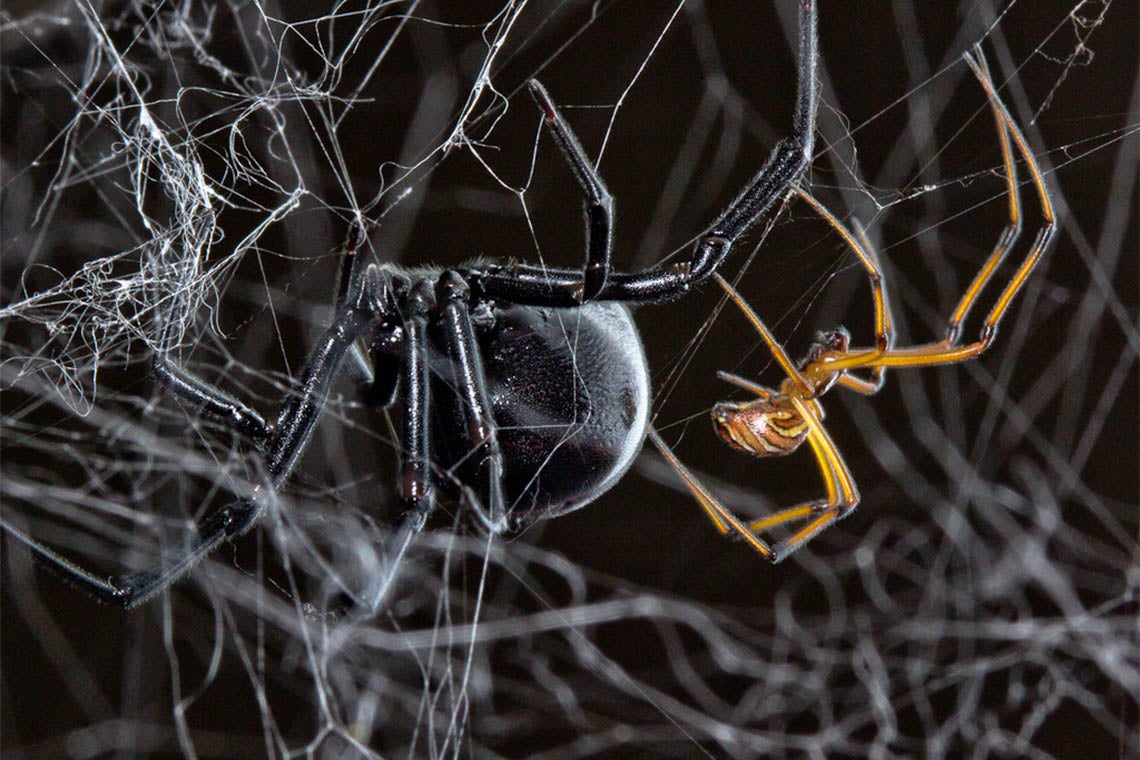 A new University of Toronto study finds male black widow spiders will hijack silk trails left by rival males in their search for a potential mate.

Male black widows will follow chemical cues – pheromones – released by potential female mates, but it was always assumed they would avoid rival males because competition is so fierce.

“We expect males to use female cues to find a potential mate, and use those left by their rivals to avoid them,” says Catherine Scott, a PhD candidate in Professor Maydianne Andrade’s lab at U of T Scarborough and lead author of the study.

“We found male black widows follow rather than avoid rival males, using their silk trails as highways that rapidly lead them to a female’s web, even if they can’t smell the female themselves.”

The western black widow spider is a venomous spider native to large areas of western North America. The life of a male is brutal and short. Mate-searching is risky – only 12 per cent of males survive – and few females are receptive to potential mates each night. The males who survive also risk being cannibalized by much larger females before getting a chance to mate.

Andrade, a renowned expert on the mating habits of cannibalistic widow spiders, says this dual tactic of using female cues and following their rivals appears to benefit males because speed is critical.

“Males are better off competing for the same female instead of risking missing out completely,” she says.

“Courtship can also last for hours, so even if a male isn’t the first to arrive on the web, if he gets there quickly enough he may be able to win the competition to be the first to mate.”

Scott conducted much of the research for this study in the field with co-author Sean McCann, partly supported through a crowd-funding campaign, where she tracked hundreds of male western black widows on a Vancouver Island beach.

She found males were able to locate females from up to 60 metres away, despite only being the size of a grain of rice. Surprisingly, males with access to other males’ silk trails moved at higher speeds than those only with access to chemical cues from females.

It’s not clear whether males are picking up on chemical cues left on their rivals’ silk, but it’s likely they are since they only follow the silk of other black widows and not from other species.

What is clear is that the presence of a rival’s silk indicates a female was signalling with pheromones at some point earlier in the evening. The first male who finds that female will shut down the signal by destroying her web, but Scott points out other males will “eavesdrop” on this earlier conversation by following the silk trail left behind, even if they can no longer smell the female themselves.

The immediate goal of this research is to see how the male black widow spiders use information to win the race to find a mate, but understanding the chemical communication of black widows could have important practical applications. The findings could help eventually develop a pesticide-free way to control black widows in situations where they are considered pests, which is important considering their venom is a neurotoxin in humans.

Scott, who will become a postdoctoral researcher at Acadia University in the fall, was surprised to find males following their rivals. Generally, if male animals have a choice between competing over a mate or avoiding competition, they avoid it.

“By studying these spiders in the field we realized they probably never get to make that choice,” she says.

While much research in the lab tends to focus on how chemical cues affect courtship behaviour or allows females to attract potential mates, she says much less is known about how males find females in the wild.

“It’s really difficult to do this type of study in nature,” adds Andrade, whose lab has discovered how male black widows will choose well-fed females to avoid being eaten alive, and how they also seek out immature females as a mating strategy.

“When you discover behaviour that seems counterintuitive, it just goes to show that you really need to study this mating behaviour as it happens in nature.”

The study, published in the Proceedings of the Royal Society B, received funding from the Natural Sciences and Engineering Research Council of Canada (NSERC), the Canada Research Chairs program, and the Toronto Entomologists’ Association Eberlie Grant.