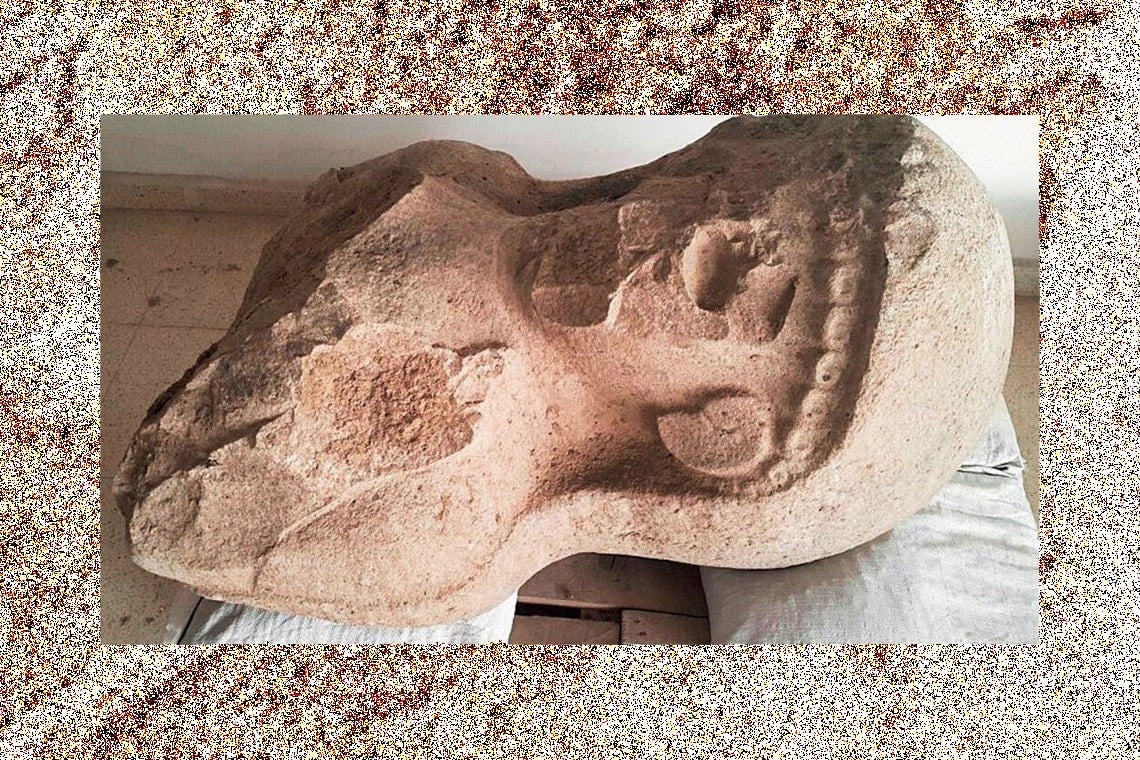 The remains of a majestic female statue uncovered at the archaeological site of Tayinat in Turkey may challenge our understanding of the public role of women in the ancient world.

Excavations led by University of Toronto archaeologists in southeast Turkey near the Syrian border have unearthed a beautifully carved head and upper torso of an unknown female figure. The remnants are largely intact, although the face and chest appear to have been intentionally – possibly ritually – defaced in antiquity.

The statue was found within a monumental gate complex that would have provided access to the upper citadel of ancient Kunulua – later Tayinat – the capital of the Iron Age Neo-Hittite Kingdom of Patina (ca. 1000-738 BC). It was located approximately 75 kilometres west of the Syrian city of Aleppo.

“The discovery of this statue raises the possibility that women played a more prominent role in the political and religious lives of these early Iron Age communities than the existing historical record might suggest,” says Timothy Harrison, a professor in the department of Near & Middle Eastern civilizations in the Faculty of Arts & Science.

The statue also provides valuable insight into the innovative character and cultural sophistication of the Iron Age cultures that emerged in the eastern Mediterranean following the collapse of the great civilized powers of the Bronze Age at the end of second millennium BC.

“Her striking features include a ring of curls that protrude from beneath a shawl that covers her head, shoulders and back,” says Harrison, who is the director of the Tayinat Archaeological Project, which since 1999 has been helping advance our understanding of early social complexity and the rise of state-ordered societies in the ancient world.

The preserved remnants are made of basalt and measure 1.1 metres long and 0.7 metres wide, suggesting the full figure of the statue would have been four to five metres high. The lower body is missing.

“The statue was found face down in a thick bed of basalt stone chips that included shard-like fragments of her eyes, nose and face, but also fragments of sculptures previously found elsewhere within the gate area, including the head of the Neo-Hittite King Suppiluliuma that we discovered in 2012,” Harrison says. “The recovery of these tiny fragments will make it possible to restore much, if not all, of the face and upper body of the original figure.”

Suppiluliuma, who ruled in the early ninth century BC, was named after a famed Bronze Age Hittite warrior and statesman who challenged the then-dominant Egyptian Empire for control of the lands between the Mediterranean and the Euphrates River.

“That parts of these monumental sculptures have been found deposited together, suggests there may have been an elaborate process of interment or decommissioning as part of their destruction,” says Harrison.

The identity of the female figure has not yet been determined, but the archaeological team has some ideas.

“It is possible that she is a representation of Kubaba, divine mother of the gods of ancient Anatolia,” says Harrison. “However, there are stylistic and iconographic hints that the statue represents a human figure, possibly the wife of King Suppiluliuma, or even more intriguingly, a woman named Kupapiyas, who was the wife – or possibly mother – of Taita, the dynastic founder of ancient Tayinat.”

Two inscribed monuments carved in Hieroglyphic Luwian, the ancient language of the Hittites, found near Hama in Syria more than 50 years ago, provide a description of Kupapiyas, the only named female known from this region in the early part of the first millennium BC. She lived for more than 100 years and appears to have been a prominent matriarchal figure, though no memory of her is preserved in any historical sources for the first millennium BC.

The presence of lions, sphinxes and colossal human statues in the citadel gateways of the Neo-Hittite royal cities of Iron Age Syro-Anatolia continued a Bronze Age Hittite tradition that accentuated the symbolic role of these transitional spaces as boundary zones between the ruling elite and their subjects.

By the ninth and eighth centuries BC, these elaborately decorated monumental gateways had come to serve as dynastic promenades, legitimizing the power and authority of the ruling elite.

The Tayinat gate complex appears to have been destroyed following the Assyrian conquest of the site in 738 BC, when the area was paved over and converted into the central courtyard of an Assyrian sacred precinct. Tayinat was then transformed into an Assyrian provincial capital, equipped with its own governor and imperial administration.

“Scholars have long speculated that the reference to Calneh in Isaiah's oracle against Assyria (Isaiah 10:9-10) alludes to their devastation of Kunulua,” Harrison says. “The destruction of the Luwian monuments and conversion of the area into an Assyrian religious complex may represent the physical manifestation of this historic event, subsequently memorialized in Isaiah's oracle.”

National Geographic Spain also featured the discovery of the statue.

TAP is an international project, involving researchers from numerous countries, and more than 20 universities and research institutes. It operates in close collaboration with the Ministry of Culture of Turkey and provides research opportunities and training for both graduate and undergraduate students.

The 2017 season was funded by the Social Sciences and Humanities Research Council of Canada and U of T.

With files from Tayinat Archaeological Project