As luck would have it: U of T statistician's new book explores the meaning of luck in everyday life 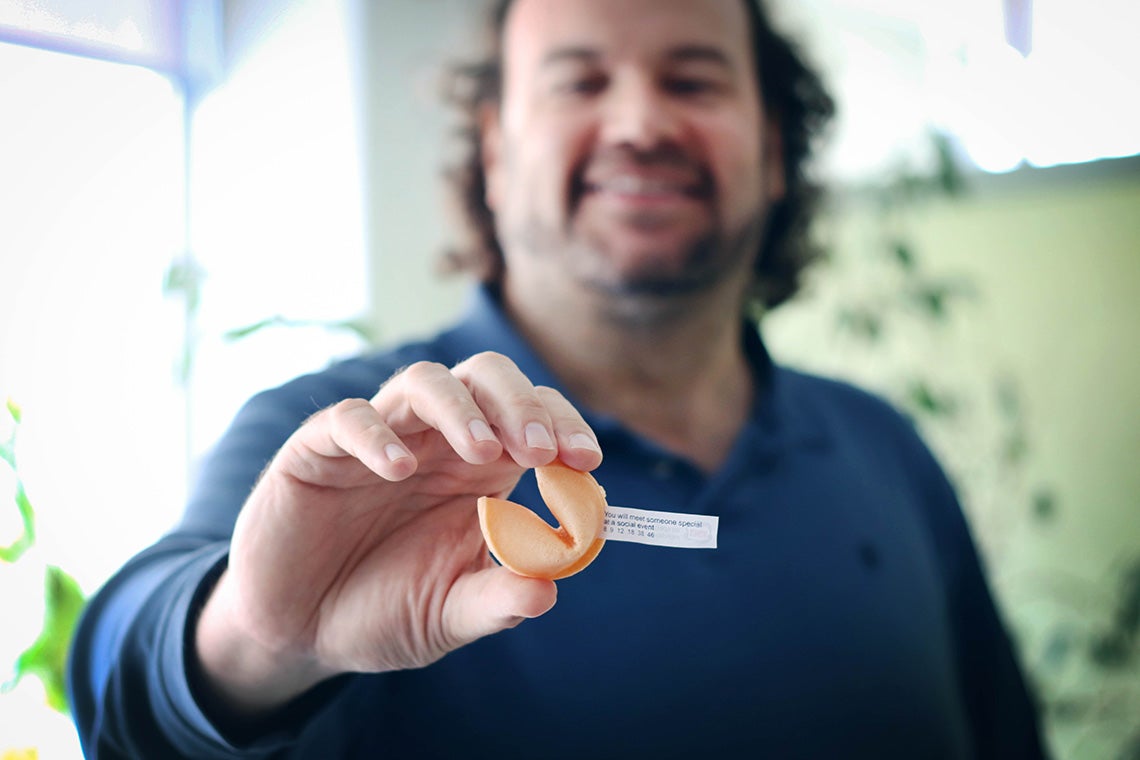 "We want things to happen for a reason," says U of T Professor Jeffrey Rosenthal. "It’s a universal human need. I completely sympathize with that notion, but I also think that isn't how the world always works"

When Joe Parker offered to take a photo of a vacationing family at a beach in Waikiki, he had no idea at first that he’d just met his half-brother. Rick Hill, the man he’d just photographed, had a noticeable Massachusetts accent, and Parker commented on it. They soon discovered that they grew up in neighbouring towns. Parker started throwing out some names, including his dad’s, Dickie Halligan. To Parker’s great surprise, Hill replied that Halligan was his father too.

Was this impromptu family reunion just a lucky coincidence or did fate intervene? Or are surprise encounters like this one a lot more common than we think?

The story of Joe Parker is one of many delightful anecdotes that the University of Toronto's Jeffrey Rosenthal, a professor at the department of statistical sciences, shares in Knock on Wood: Luck, Chance, and the Meaning of Everything. His new book explores the concept of luck in its various forms through the lens of a statistician.

After the release of his first book on randomness and probability, Rosenthal says friends, colleagues and readers kept asking him whether he believes in luck or not. Unable to give an answer, he realized that there must be more to the topic than meets the eye.

He embarked on a two-year research and writing journey that led him to collect countless stories, read piles of research papers and watch hours of Netflix – who said research can’t be fun? (He also coincidently discovered that he was born on a Friday, the 13th.)

The result is a light-hearted, yet insightful analysis of the meaning of luck, its different faces, and how to tell the difference between “dumb luck” and the things we can control.

Dee Keilholz of the department of statistical sciences spoke to Rosenthal about some of his findings.

Do you believe in luck?

I do. And when I say I believe in luck, I mean random things that are outside of our control. Luck plays a huge role in everybody’s life, myself included. However, I realized after a while that when people ask me if I believe in luck, they often mean different things. Some people believe in fateful events and destiny and then there’s lucky charms and astrology. There are these various forms of luck, depending on whom you talk to. I realized that it’s hard to come up with a simple answer that explains what luck is. That’s partly what my book is about – trying to figure that out.

If luck is this random, highly influential force in our lives, how do you suggest we deal with it? Should we let go of the illusion that we are in control of our life or should we “shape our own luck” and try to take things into our own hands?

I think there are things in life that are in our control and others that are not. For example, somebody might t-bone your car, and that’s just bad luck. Wrong time, wrong place.  But there are also things you can do to drive safely: wear a seatbelt, drive within the speed limit, and so on. I made up a “luck version” of a popular serenity prayer: “Grant me the serenity to accept the random luck I cannot control, the knowledge to change the luck which can be modified, and the wisdom to know the difference.” Knowing the difference is key.

How can statistical thinking help us understand that difference between random luck and the things we can change?

In my book, I use the term “luck traps,” meaning times when people think that an event is more meaningful or surprising than it is, and there are certain ways of thinking that can help us understand why that is.

One of the many principles I talk about in Knock on Wood is what I call the “Out of How Many” principle. Or, in other words, how many different chances were there for a certain event to happen? Let's take the half-brothers who met at that beach in Hawaii. There are more than 300 million people in the U.S., and a percentage of those have estranged relatives. Each of those people make countless decisions over the course of their lifetime about where to go and what to do. So, you could say that there were millions of “tries” and out of all these tries, one time a happy reunion happened. I mean, it’s rare but not that incredible if you look at it like that.

Why do you think we are so prone to seek greater meaning behind random events?

M. Night Shyamalan, the director of the movie The Sixth Sense, once said that every great movie has some element of magic in it. That’s certainly true for a lot of the films and literature we love. We want the good guys to win against all odds and the boy and the girl are destined to get together in the end. We want things to happen for a reason. It’s a universal human need. I completely sympathize with that notion, but I also think that isn't how the world always works. Bad things can randomly happen to good people and love doesn’t necessarily conquer all.

Don’t you find that sad? Doesn’t this make the world a bit less magical?

I don’t think so. Our world in all its randomness is quite wonderful as it is. There are more than seven billion people on this planet and most of them are perfectly nice and fascinating to get to know. I believe we need to appreciate the world the way it works. It leads to better logical thinking and decision-making, while leaving plenty of room for incredible adventures.