Lois Weir, one of the first employees of then Erindale College, became associate dean in the Faculty of Music 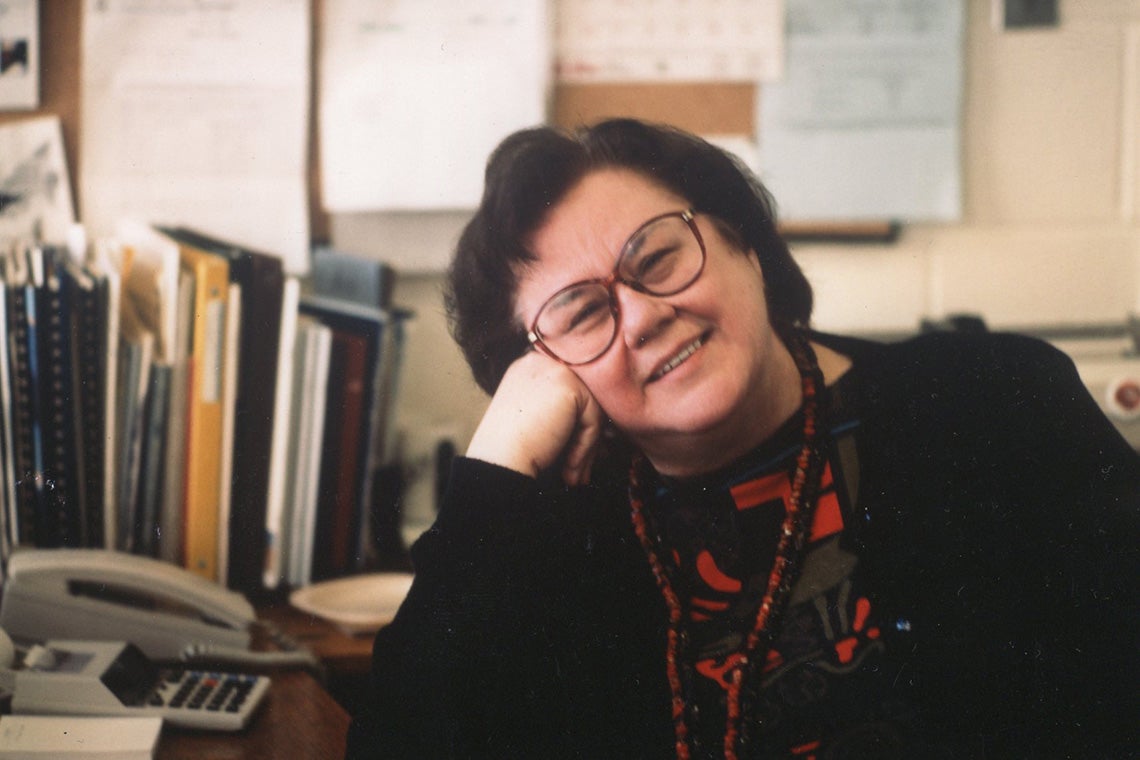 As one of the first employees at Erindale College, Lois Weir helped shape what is now University of Toronto Mississauga, supporting faculty and students with her outgoing, ebullient personality and get-it-done attitude.

Weir later brought those attributes to the downtown Toronto campus, where as associate dean in the Faculty of Music she cared deeply for students’ well-being, while keeping the department organized.

Weir, who died in February at the age of 87, began her association with U of T in 1967, when Erindale’s first academic leaders were looking for a secretary.

Weir, recently divorced, was raising two young boys on her own in Streetsville, now part of Mississauga. She was working in a public school when she heard that the newly established Erindale was hiring for the opening of the campus.

Her outgoing and friendly manner, her obvious intelligence and wide-ranging knowledge, impressed newly appointed dean John Colman and associate dean E.A. (Peter) Robinson, who were trying to find the right person to run their office. After more than a dozen unsatisfactory interviews with others, “we were immediately impressed by her transparent, genuine niceness and candour,” said Robinson, now retired and a professor emeritus in the department of chemistry. “So a philosopher and a chemist had no difficulty in agreeing to make Lois our number one choice.”

Weir quickly showed herself as competent and dedicated, and was given more responsibilities as Erindale expanded. She helped hire staff and set up new departments, conducted research, supervised maintenance, and did many other tasks in addition to running the dean's office.

“She was a very caring person,” who was helpful and concerned about the faculty, students, administrators and staff, said Helen Breslauer, a sociologist who taught at Erindale in the 1970s. Weir was like the “glue” that held Erindale together in its early years, she said. “She was vital to the beginnings of the college.”

Weir was even fiercely protective of a family of ducks that often crossed the roadway leading into the campus, Breslauer recalls. “She took care of everybody.” Luba Andrews, who first met Weir through her husband Howard Andrews, then a geography professor and later a vice-principal at Erindale, said Weir was so capable “she could have been running the university.”

Weir became a close friend, especially after Andrews’ husband died in 1988. “She took me under her wing, she stepped up and was always there for me,” Andrews said. “She was so caring, kind and generous. I don’t know that I’ve ever heard her say ‘no’ to someone who needed help.” But she was also intelligent, well-read and wise, and had a great sense of humour and a youthful outlook on life, Andrews added.

After 16 years at U of T Mississauga, Weir moved to the downtown campus to take a job as associate dean in the Faculty of Music. There, she continued to take an interest in the students’ well-being, in addition to her other duties with budgeting, financial reporting and scheduling classes.

Composer John Beckwith, a former professor and dean at the Faculty of Music, said Weir’s role as the chief non-academic figure in the department was crucial. “She was one of the best we ever had.  She not only headed the staff efficiently, but entered into the musical activities with enthusiasm and spirit.”

Weir’s second cousin Jacqueline Eaton, who worked briefly in the Faculty of Music as a teenager, recalls how dynamic the work environment was. “Her office was always abuzz.”

Eaton stayed with Weir on weekdays and drove to the campus with her each day, a stimulating experience with her older, energetic relative. “She was effervescent, and a big talker. She was a classy, classy lady.”

After retiring from the music faculty, Weir began working part-time out of her home as manager of the Amici Chamber Ensemble, whose concerts she had attended since its founding in the late 1980s. She had met the musicians while they were teaching at U of T, and impressed them with her musical knowledge and dedication. At Amici, she handled contracts, ticket sales and subscriptions, and the logistics of the group’s performances.

After finally retiring for good, Weir continued to attend all the Amici concerts until shortly before her death. Essentially, “it was an official Amici concert because Lois was there,” Hetherington said.

Lois Elaine Weir was born in 1930 in Montreal, but moved to Toronto as a young child. She was very musical, singing in school choirs, winning competitions, and she performed on radio and at Massey Hall.

She married at age 18, and lived in a number of different communities – Sundridge, Woodstock, Ajax, and then Streetsville – with her husband Ed Seppala, who was in the lumber business. She was in Streetsville with her two young sons when her marriage broke up and she had to go to work outside the home to make ends meet. Getting the job at Erindale was important to her because she hadn’t had the chance to go to university herself, said her son Paul Seppala. Because Weir (pictured left in 1958) was so well-read and intelligent, she was comfortable around academics, he said. “She admired and respected them, but wasn’t intimidated in their presence.”

Weir’s friendship with professors led her to become the first person in Canada to touch a moon rock, Paul said. David Strangway, who later became U of T's president,  was at Erindale when he headed the geophysical research of NASA’s Apollo moon missions. One day on the Erindale campus, while dealing with another administrative matter, Strangway asked Weir if she would like to accompany him while he unpacked the first moon rock shipment sent to him. “He opened the rock’s casing and asked if she’d like to take it out,” Paul said. “So she did.”

Later, the position in the in the music faculty was a “dream job” for Weir, her son said, because it expanded her lifelong interest in music. And that interest was eclectic. In addition to classical music, she loved Broadway musicals and pop music, and she was the first in the family to purchase Beatles and Bob Dylan albums.

Weir also loved to travel and was not afraid of going alone. She made several trips by herself to Great Britain, as well as travelling with friends.

Weir became politically active in her 50s, driven by a strong sense of social justice. She was an established figure in the Liberal party organization in the federal riding of Parkdale-High Park in the west end of Toronto, and served on the riding’s executive for many years, Paul said.

For her entire life Weir was a voracious reader. She devoured the Globe and Mail and the Toronto Star every day, and was a long-time subscriber to the New Yorker and other magazines. She  attended an exercise class for 20 years, and slowed down only after being struck by cancer.

Music was deeply present in her life to the very end, said her friend Luba Andrews. “When she was very close to dying, she was still singing. Her eyes were closed, but she’d be lying in bed singing some little tunes, in perfect pitch.”