Leukemia drugs may help patients with treatment-resistant lung cancer: U of T researchers 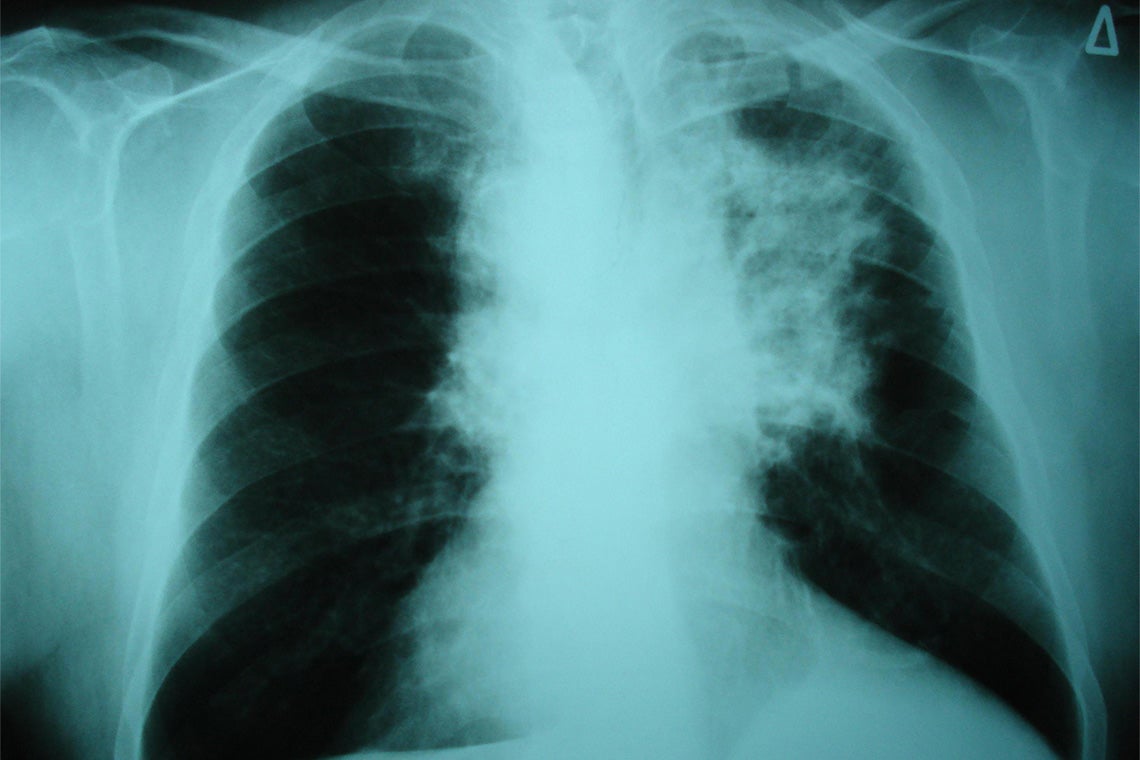 Two recently approved leukemia drugs could be enlisted against treatment-resistant lung cancer, with a clinical trial for one of them expected to launch later this year in Toronto and Zagreb, Croatia.

Researchers at the University of Toronto, led by Igor Stagljar, a professor of molecular genetics and biochemistry at the Donnelly Centre for Cellular and Biomolecular Research, made the findings using a new live cell-based method developed by his team for identifying small molecules that target specific mutations in cancer cells.

The findings were published in the journal Nature Chemical Biology.

“Drug resistance is a big problem for lung cancer patients,” says Stagljar. “Our new technology allows us to find molecules that could be used against cancers for which no other treatment options are available.”

The researchers identified gilteritinib and midostaurin – two drugs already approved for patients with a particular form of leukemia – as potential treatments for lung cancer patients with triple mutant epidermal growth factor receptor (EGFR). The tumours in these patients are highly resistant to available therapy.

The Toronto team hopes to demonstrate the efficacy of these drugs in patient trials, with the gilteritinib trial to launch first. If it proves successful, gilteritinib could in a few years become a new standard-of-care treatment for an estimated 60,000 lung cancer patients worldwide who have triple mutant EGFR.

“We already have a sense of gilteritinib doses that are safe to give to humans,” says Dr. Adrian Sacher, an oncologist at the Princess Margaret Cancer Centre, at University Health Network, and an assistant professor of immunology at U of T who will lead the trial. “We only need to demonstrate efficacy and hopefully make them a novel treatment option for lung cancer patients that have developed resistance to current targeted therapies.”

Lung cancer remains a leading cause of death from cancer in Canada and the world. Non-small cell lung cancer is the most common type of the disease, with about one fifth of cases in North America caused by EGFR mutations.

EGFR is a cell surface receptor that regulates cell proliferation and belongs to a class of proteins known as receptor tyrosine kinases (RTKs). Oncogenic mutations make the receptor overactive, spurring on cell division.

There are dozens of approved kinase inhibitor drugs that target specific mutations in the receptor’s catalytic domain, but tumours quickly gain new mutations and become drug resistant. A third of lung cancer patients on osimertinib, a last resort drug approved in 2017 against the double mutant EGFR, will develop the treatment-resistant C797S mutation within six to nine months. 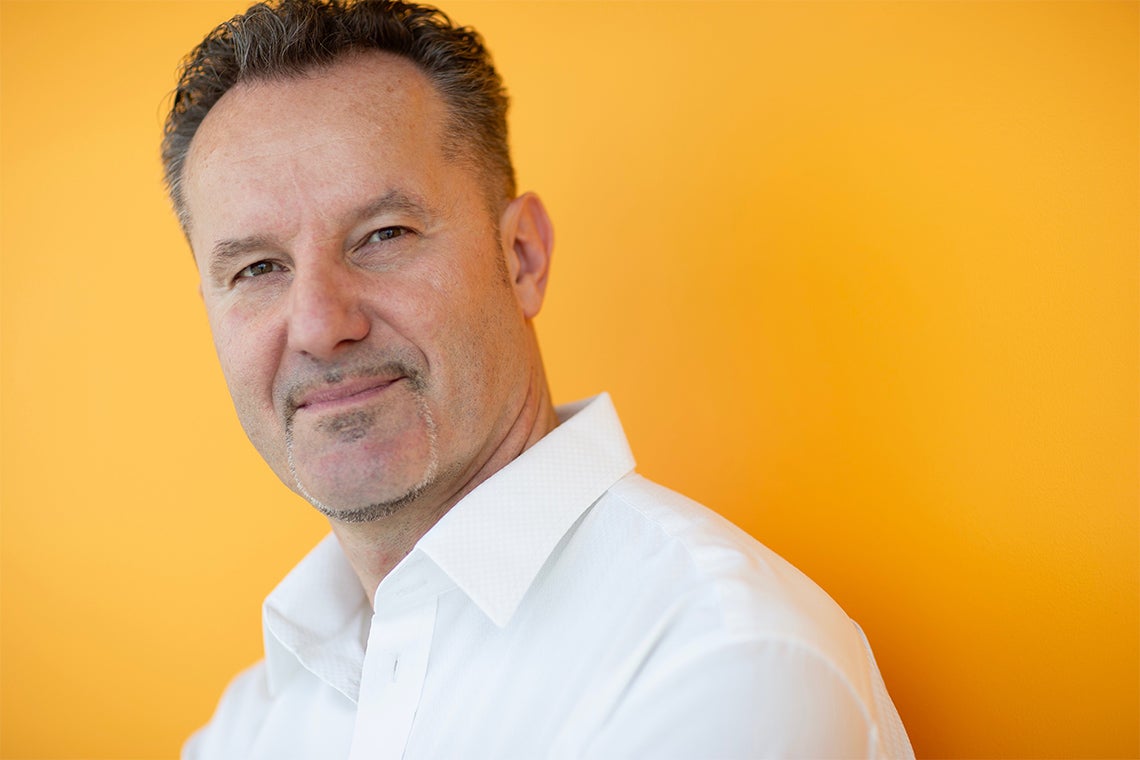 “Our new technology allows us to find molecules that could be used against cancers for which no other treatment options are available,” says Igor Stagljar, a professor of molecular genetics and biochemistry at the Donnelly Centre for Cellular and Biomolecular Research (photo by Sam Motala)

In a bid to stay one step ahead of the disease, scientists seek to identify drugs that can target the mutations which arise in response to treatment. However, most methods are test tube-based and focus on finding new kinase inhibitors. Consequently, promising drug candidates are often not suitable as therapeutics because they don’t penetrate the cells well or because their effects are altered by other cellular factors.

The tool developed by Stagljar’s team overcomes these hurdles by testing potential drug molecules directly in living cells. Named MaMTH-DS, for Mammalian Membrane Two-Hybrid Drug Screen, the all-in-one method allows identification of drug candidates that both enter the cells and target the receptors in their natural environment.

“The advantage of our method is that we are doing it in living cells, where we have all the other molecular machineries present that are important for signal transduction,” says Stagljar. “Also, the compounds are fished at very low dose, which allows us to test for both permeability and toxicity at the same time.”

MaMTH-DS allows identification of drug molecules that target not only the receptor’s kinase activity, but also its interactions with other cellular proteins.

In a proof of principle study, the team looked for small molecules that can target the resistance-conferring C797S mutation in the triple mutant EGFR. A screen of almost 3,000 molecules revealed four promising compounds that had no effect on the normal receptor, meaning the drugs would be less likely to harm healthy cells.

In addition to midostaurin and gilteritinib, the latter of which will be tested in a pilot trial of about 20 lung cancer patients whose tumours harbor the C797S mutation, the study also revealed two more promising molecules.

One of these molecules, known as EMI1, acts on the mutant EGFR in a completely new way – not by inhibiting its kinase activity, but by targeting the receptor for degradation with the help of other molecular machineries. The researchers think that EMI1’s more complex mechanism of action will make it more difficult for tumours to develop resistance to it.

Stagljar is working with Rima Al-awar, an associate professor in U of T's department of pharmacology and toxicology, and the head of therapeutic innovation and drug discovery at the Ontario Institute for Cancer Research (OICR), and her medicinal chemistry team to create an improved version of the EMI1 molecule before its ability to shrink tumours can be evaluated in animal cancer models and eventually patients.

"The unbiased screening approach by the Stagljar's group has the merit of identifying small molecule inhibitors that could act via new mechanisms of action that would otherwise escape detection by conventional drug development strategies, as shown in this proof of principle study, " says Marino Zerial, the managing director of the Max Planck Institute of Molecular Cell Biology and Genetics in Dresden, Germany. Zerial is one of Stagljar’s collaborators.

The research also included collaborators from the Hospital for Sick Children and Sinai Health System’s Lunenfeld-Tanenbaum Research Institute, as well as Utrecht University in the Netherlands, the Department for Lung Diseases Jordanovac in Zagreb, Croatia, Mediterranean Institute for Life Sciences in Split, Croatia and Yale Cancer Center.

The research was supported by funding from the Canadian Institute of Health Research, Genome Canada and the Ontario Research Fund, among others