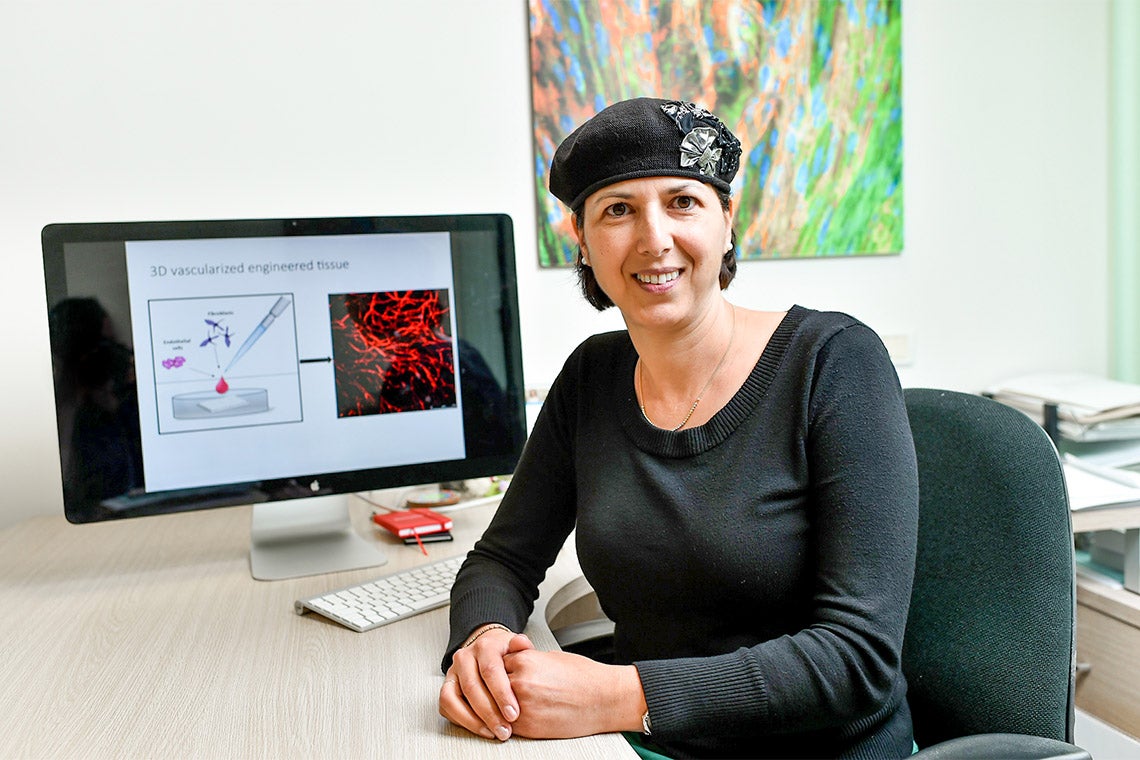 Professor Shulamit Levenberg, a leading interdisciplinary researcher in stem cells and tissue engineering at Technion-Israel Institute of Technology, has started her month-long appointment as Medicine by Design’s first scholar in residence.

While at the University of Toronto, the dean of Technion’s Faculty of Biomedical Engineering will deliver a series of talks, meet with faculty members who have complementary research interests and engage with trainees, with a view toward identifying collaborative research opportunities.

“The goal of the Medicine by Design scholar in residence program is to invite top international investigators in regenerative medicine and related fields to Toronto to engage with our dynamic community, catalyze new collaborations and advance international partnerships,” said Michael Sefton, executive director of Medicine by Design, a University Professor at the Institute of Biomaterials and Biomedical Engineering (IBBME) and the Michael E. Charles Professor in the department of chemical engineering and applied chemistry.

“Professor Levenberg is a leader in her field and we hope her visit will strengthen a long and productive relationship.”

Levenberg’s visit will build on existing collaborations between Technion and U of T and its affiliated hospitals. Lyon Sachs, an alumnus of the Faculty of Applied Science & Engineering, has given $2 million to the university to accelerate joint research projects between U of T and Technion in biomedical and civil engineering. The McEwen Stem Cell Institute and the Peter Munk Cardiac Centre at University Health Network have also partnered with Technion to create a centre aimed at developing new ways to treat heart disease, with a focus on regenerative medicine.

Levenberg will deliver a talk on Thursday, July 18 at noon titled “Vascularization Dynamics in Engineered Tissues” as part of Medicine by Design’s Global Speaker Series. She will give another talk titled “Engineering Vascularized Tissue Constructs” on July 23 at 11 a.m., hosted by the translational biology and engineering program at the Ted Rogers Centre for Heart Research. She will also hold office hours at the Donnelly Centre for Cellular and Biomolecular Research, room 508, on the following dates:

Levenberg earned her PhD at the Weizmann Institute of Science, where she focused on cell adhesion dynamics and signalling, and pursued her post-doctoral research in tissue engineering at the Massachusetts Institute of Technology in the lab of Professor Robert Langer. In 2004, she joined the Technion Faculty of Biomedical Engineering, where she conducts interdisciplinary research on stem cells and tissue engineering. She also serves as the director of the Technion Center for 3D Bioprinting and The Rina & Avner Schneur Center for Diabetes Research.

She spent a sabbatical year as a visiting professor at the Wyss Institute for Biology Inspired Engineering at Harvard University and a summer sabbatical (2017) at the University of Western Australia as a winner of the Raine Visiting Professor Award. Levenberg received the Krill Prize for excellence in scientific research, awarded by the Wolf Foundation, and was named by Scientific American as a “research leader” in tissue engineering for her seminal work on vascularization of engineered tissues. She also received the France-Israel Foundation Prize, the Italian Excellence for Israel Prize, the Teva Research Prize and the Juludan Prize. In 2018, she received the Rappaport Prize for Biomedical Sciences.

Levenberg has authored more than 100 publications and presented her work at more than 100 international conferences as an invited or keynote speaker. She is founder and chief scientific officer of two start-up companies in the areas of cultured meat and nanolitre arrays for rapid antimicrobial susceptibility testing. She is a member of the Israel National Counsel for Bioethics and is actively involved in training young scientists.