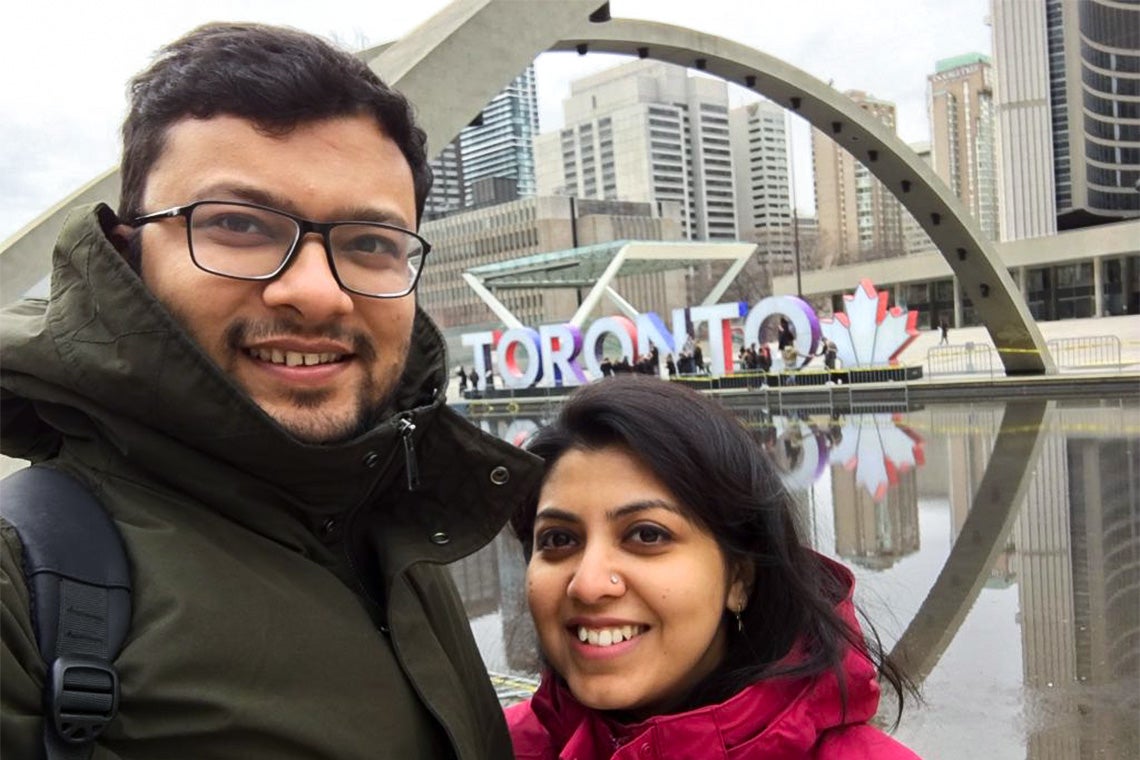 MD Nafizuzzaman, shown here with his wife, is a graduate of U of T's Faculty of Information who landed a sales strategist job with Post Consumer Brands (photo courtesy of MD Nafizuzzaman)

When MD Nafizuzzaman started applying for jobs at the beginning of March, the job market was still fairly normal. Then COVID-19 hit and everything changed as nervous employers put their plans on hold.

But Nafizuzzaman persevered. Graduating with a master's degree in information this fall, the University of Toronto student managed to land a full-time contract position without ever meeting any of his new colleagues in person.

How did he do it? Over a four-week period in the spring, Nafizuzzaman did five online interviews with Post Consumer Brands, which makes Grape Nuts and Frosted Mini Wheats among many other cereals. His interviewers were located all around the world. Thanks to the experience he gained using Blackboard Collaborate and Zoom during the last classes of the winter semester at U of T, Nafizuzzaman says he was confident, if somewhat nervous, about presenting online as part of the process. He was ultimately offered a job as a sales strategist for international business.

“I felt like I could provide the 360-degree answers they wanted,” he says. “Every course that I did, whether it was in my concentration or not, has been a great source of learning and knowledge for me.”

In his new role, Nafizuzzaman spends about half his time dealing with information systems and integration of data and the other half looking to increase sales in co-ordination with sales team members in different countries. He draws on his extensive sales and marketing experience that he acquired over almost a decade working in his native Bangladesh, where he earned an undergrad degree in finance and international business.

“I'll be able to apply almost everything I’ve learned at the Faculty of Information,” he says, adding that, as a recent newcomer to Canada, he especially valued his co-op preparation course, which introduced him to Canadian business culture, and his placement at the McCarthy Tétrault law firm, where, among other things, he got to work with some of the firm’s Information system solution providers.

Nafizuzzaman, who moved to Canada with his wife and young son, chose to study at the Faculty of Information for two reasons. “I needed to train myself for the new horizon of data and information, which was something I couldn’t learn on the job,” he says. “And what better way to become Canadian?”

When applying for his new job, he emphasized both his newly acquired information systems knowledge and experience as well as his background in sales. The official offer came through in early May.

Nafizuzzaman, who has been working virtually since his first day on the job, had his first in-person meeting with his manager over pizza and soda on a bench outside the Bissell Building and Robarts Library. Neither he nor his new boss were up for eating at a patio so Nafizuzzaman offered to show her his school as they chatted about work and pandemic life.

Since then he's been to the office twice – once to pick up documents and once to taste some breakfast cereals being sent to customers in Venezuela and Nicaragua. As much as he's enjoying his new job, he misses the personal interactions with colleagues in departments ranging from marketing to supply chain.

On the plus side, working from home made it easier for Nafizuzzaman to complete the final summer course he needed to graduate while adjusting to a new job.

Nafizuzzaman advises fellow grads and job hunters to stick with it. “There are still companies hiring,” he says. “They are creating a lot of roles for people who are tech savvy because of this COVID-19 situation. I would encourage fellow students to keep applying and trying.”