Just in time: a new U of T history class delves into the Obama presidency 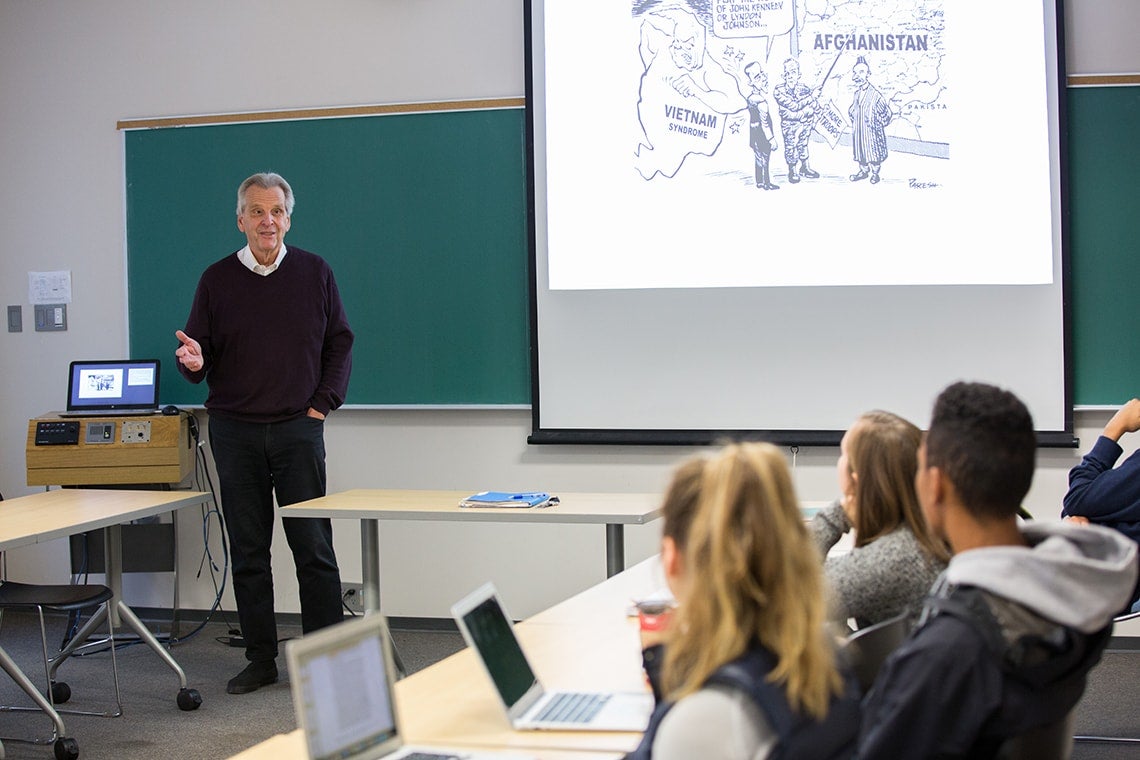 Barack Obama hasn’t left the Oval Office yet – but that isn’t stopping a first-year history class at U of T from dissecting his presidency.

With subject matter lifted straight from today’s headlines, the class titled “Barack Obama as History – Barack Obama in History” delves into the controversies, highlights, missteps and successes of the iconic figure.

“Students are very conscious of the fact that they were 10 years old when his first term started,” says Professor Ronald Pruessen, who teaches the class. “But they are also very conscious of the significance of the United States and also the charisma and character of Obama. They are fascinated by him and want to learn more.”

A former chair of the department of history, Pruessen wrote a biography of John Foster Dulles that ended up being nominated for a Pulitzer Prize. He is now working on a book about Obama, and his research is integrated into the syllabus.

Students study everything from the measures Obama took to stimulate the American economy in 2008 to his Obamacare health plan. They examine the conflicts in Afghanistan and Syria and the challenges posed by ISIS.

“We are talking about things that will directly affect us in the next few years,” said Simone Racanelli, an international relations student. “Issues with Syria, issues with Iraq.”

The course description promises students that they will learn how historical research can enrich their understanding of the present day “in ways that quick-flashing tweets and photo ops” cannot match.

In a recent class, students discussed opinion pieces by Roger Cohen and Thomas Friedman in The New York Times and Stephen Walt in Foreign Policy, all dealing with American policy in the Middle East. Some were sharply critical.

“Cohen blames Obama for the Syrian issues,” said Iman Jaffari, a Rotman Commerce student who was born in Iraq. “From an historical position that’s not true. It started with the Treaty of Versailles.

“But I do agree with his point about how things have escalated.”

The class includes students from countries in Africa, China, Iran, Turkey and the United States – and that diversity is a plus, Racanelli says.

“It’s good to hear the opinion of someone who has had a different upbringing. It helps me to approach other courses more open-mindedly.”

Pruessen finds Obama intriguing, a man who, despite being the first African American president, is bedeviled by critics who say he has not done enough for black Americans.

He finds many similarities between Obama and Abraham Lincoln.

“As someone confronting staggering problems, there is a real connection with Obama,” Pruessen says. “Highly sensitive, charismatic, amazingly articulate, so admirable is so many ways as far as the impulse is concerned, but ultimately beset by terrible limitations as well.”

Pruessen considers Obama a history-minded president, who took pains in public to distinguish his actions in Afghanistan from the 2003 invasion of Iraq and the Vietnam War. But he expects history will be kinder to Obama on domestic initiatives such as health care.

“If there is a mistake – and I think there is in the Obama calculation – it is that he didn’t sufficiently recognize that the challenge in Afghanistan was beyond the ability of the U.S. to meet,” Pruessen says.

Obama has acted cautiously in Syria, attracting criticism as a consequence, Pruessen says.

“Obama is close to finally ‘getting it’ and recognizing that while this is a horrible problem, the U.S. doesn’t have the capacity to solve it,” Pruessen says. “He is holding back in a way that frustrates Americans and non-Americans alike.”