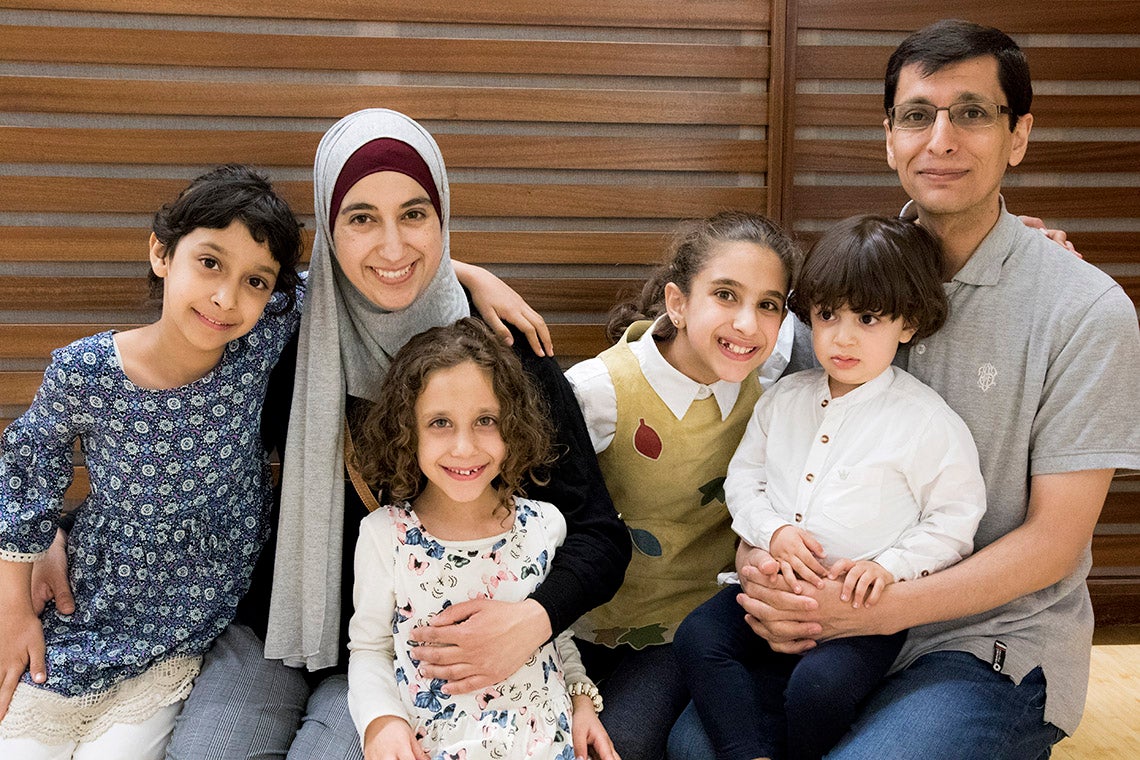 Eman Hammad (second from left) graduates with a PhD in electrical and computer engineering from the University of Toronto. She juggled her family life, research and volunteer work with the help of U of T resources (photos by Noreen Ahmed-Ullah)

Amidst the smiles and selfies of convocation, what's often left untold is the journey – at times seemingly insurmountable – that a student takes to get here.

Juggling four children – the last one born two years ago – Eman Hammad completed her PhD dissertation in smart grid cybersecurity by tapping into the university resources around her, having her family pitch in, and simply putting her head down and forging ahead.

The 41-year-old graduates on June 19 from the University of Toronto with a degree in electrical and computer engineering – and another degree in life.

Born and raised in a Palestinian refugee camp in Jordan, Hammad lost her mom when she was just 15 years old. She went from being the top-ranked student in her high school to looking after six young siblings, the youngest of whom was 4 years old.

“Before I was 15, I had a plan – I wanted to be a professor,” she says. “But after she passed away, I couldn’t see ahead. I had to be there for my sisters and brothers. They were falling apart. Literally, I would be called from the classroom to go home because my sister was crying.

“It became easy for me to see my dreams and plans not happening. I remember I would do the household chores, stand behind the curtain and cry myself out. This was not what life was supposed to be.”

But she found resolve – a determination that continues to underpin whatever she sets her mind to.

"I can’t be weak," she remembers saying to herself. "I have to keep going. And that has been my life since then – just keep going.”

In Jordan, Hammad ignored relatives who told her to set aside her dreams and focus on her siblings. She broke barriers, becoming the first woman in her family to get a post-secondary education and become an engineer, eventually helping her younger siblings achieve their educational goals, too. 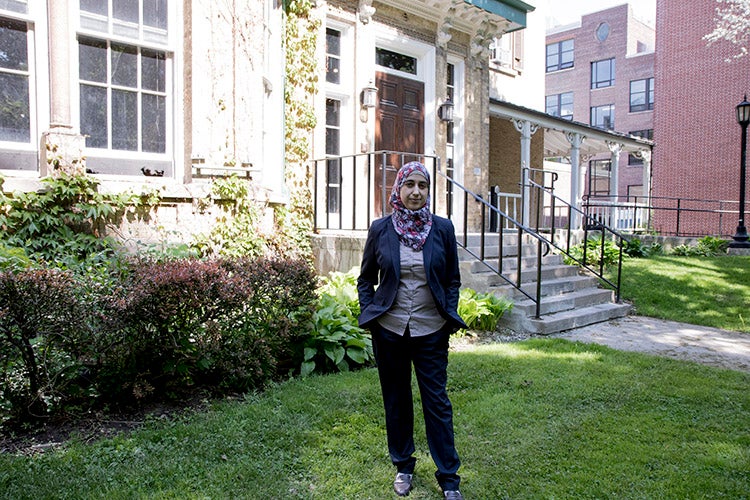 Eman Hammad outside the Centre for International Experience, where she was paired with a mentor after her arrival at U of T. The international student then went on to mentor other incoming students (photo by Noreen Ahmed-Ullah)

She moved to the U.S. after her husband, a fellow engineer, was admitted to Texas A&M University for his PhD. It was her husband who encouraged her to pursue her master’s, and with her eldest daughter a few months old, Hammad began graduate school at Texas A&M. At times, she balanced two jobs, research and two more babies before graduating in 2011.

That “keep going” philosophy came in handy when she was accepted into U of T’s PhD program. The family arrived in Toronto in the dead of winter in 2013, abandoning their light jackets for winter coats. Her husband, Abdallah, had not found work yet, and Hammad was forced to quickly learn how to secure financial aid, medical supports and child care, even as she plowed away at her research, and dealt with life – sick kids, her own two miscarriages, work and the birth of her son in 2016.

With her supervisor's support, she’d take her son into the lab with her every day for the first five months, breastfeeding and holding him while typing away at the keyboard. When he cried, it was time to take a break and take him out for a stroll. In between diaper changes, picking up the older kids from daycare and school, cooking and helping them with homework, she prepped for conference presentations, worked on papers and planned time to work on the dissertation.

When she needed help, she found resources at the university.

The Centre for International Experience initially paired her with a mentor to help ease the transition.

The Family Care Office suggested she look for a teaching assistant position for income and to cover child care costs. They helped with information on health care, daycare and scholarships. She began using the food bank at the Multi-Faith Centre.

“The idea of the Family Care Office is very simple – telling students with responsibilities, ‘You are welcome, we know what you go through. We can listen to you when you need to talk. We are here.’

“Honestly, I felt there was no excuse to not succeed at U of T. There were endless resources, and everybody was here to support,” she says.

Hammad’s story is not just about how she made it all happen, drawing on U of T resources to help balance family needs with the rigour of a PhD. It’s also about how Hammad found a way to give back to the university community.

“When I saw all this, I was like, ‘I don’t think I can only use these resources. I will be part of the resources.’

At the Centre for International Experience, she became the centre’s student advisory committee president, helping to shape content and programming and being part of a welcoming committee for high school students. Then, she became a mentor herself for incoming international students.

After getting an apartment in U of T’s family student housing, she got a job as a resident assistant, helping students and their families navigate what for many was a new culture and country. Along with another resident assistant, she helped start English speaking classes that soon became a hit with participants from Brazil, Mexico, Egypt, China, Japan, Israel and Russia.

In the engineering world, she was selected to chair the Toronto communication society chapter of the Institute of Electrical and Electronic Engineers (IEEE). She became the first graduate student to hold the position, which involved organizing conferences, lectures, technical talks and workshops for colleagues in the field.

“I tried for awhile not to do volunteer work,” Hammad says. “But I need a space where I can do something that is giving back, in whatever capacity, whether its professional or volunteer. It’s just feeling that I am part of a community and feeling that I connect with people on a different level.” 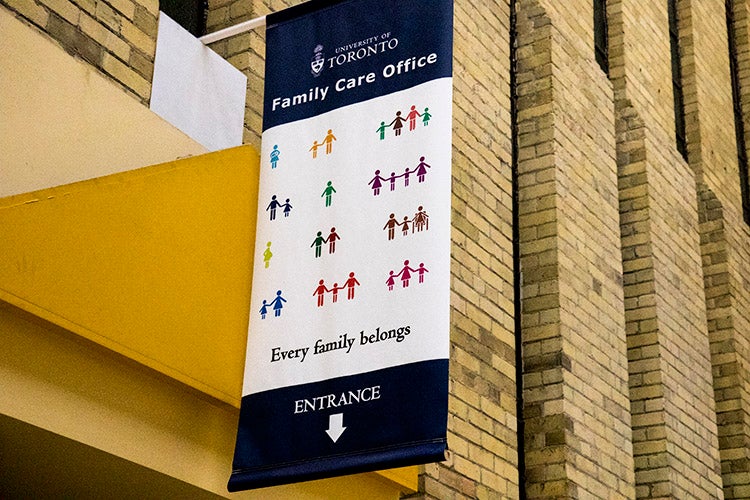 Last fall, her thesis was approved without edits – which the School of Graduate Studies says is a rare feat in engineering. Experts say her work, which received best paper recognition from a prestigious smart grid conference in 2015, is important given existing cybersecurity risks.

“Her research was very good – well above the average,” said Dimitrios Hatzinakos, a U of T professor of electrical and computer engineering, who sat on the dissertation committee. “It’s important research because it deals with security in smart grids like the electricity grid. Every day, hackers try to get into government and private systems that are very vulnerable. They could bring down a network, putting everyone into the dark and disturbing a community, or create a hostage situation. For all these reasons it’s important to have good security measures to protect the grid.”

Hammad is now working at PricewaterhouseCoopers.

So how did she get it all done?

“I had to make a mental note that the time that I have for my studies is the time that my children are in school and daycare. After that, it’s family time. It’s not easy. And kids will get sick in the most inappropriate times, like when you have a presentation, or a deadline, or an exam, or when you are at a conference.”

Cooking was done on the weekends. Her husband picked up groceries, did the dishes, the laundry. Everyone had to tolerate a messy house, especially close to deadlines.

She learned not to be hard on herself.

“I am a perfectionist, but I learned good enough is good for my mental health. Because if you set a very high goal, you will feel helpless. You will feel crippled. You will not be able to do the little steps.”

She set one goal at a time.

“For me, it was a step at a time. OK, this conference paper, this journal, work on this idea, finish this semester, the next semester. If I thought about this as a PhD, and that I have three and then four kids, I wouldn’t do it. I think it makes it easier for people if they do not think about the size of the challenge, more about how one step can get you to the next step.”

Lisa Engel, who worked as a fellow resident assistant with Hammad, is also graduating this spring – but with a PhD in rehabilitation medicine. She says she learned a lot from watching Hammad.

“She is one of my parenting mentors,” says Engel. “She makes time for family while also creating high-quality research. I call her a superwoman, not ignoring one area of life but striving to manage it all.”

And, of course, there was her family.

On June 19, her husband and four kids will be on hand to watch as she receives her PhD.

“They saw me putting all this time and energy into the PhD, and they saw how important it was for me,” she says. “It’s only fair that they get to be there to see when the reward comes because they are a part of it.”