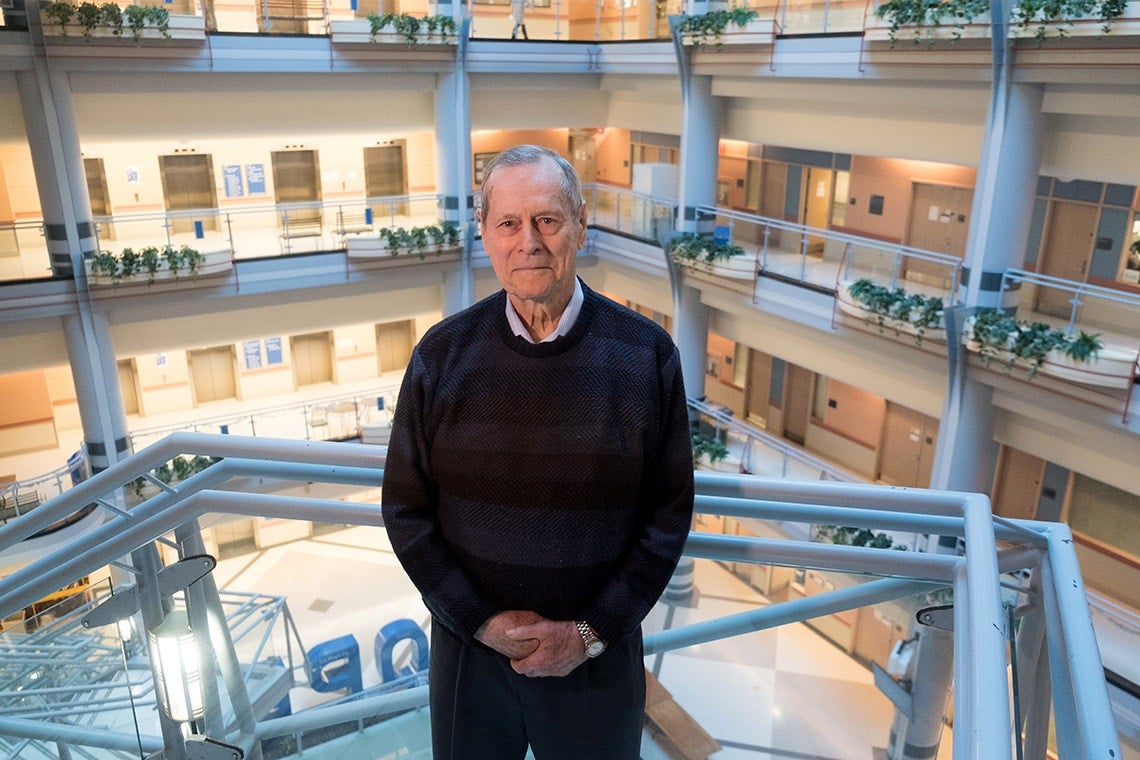 The public should support basic science because “it’s the beginning of everything else," says James Till, co-discoverer of stem cells. “What you do with a discovery is create potential for further development." (photo by Laura Pedersen)

Till, who identified stem cells with Ernest McCulloch in the 1960s, calls for greater government investment in basic science

James Till and his colleague Ernest McCulloch were researching the effects of radiation on bone marrow tissue in lab mice when they made an astonishing discovery.

One Sunday when McCulloch went to the lab to take a routine sample, he noticed bumps on the spleen of a mouse, clumps of cells that emerged after it had been injected with marrow. He counted the bumps and found that the number was directly related to the number of marrow cells that had been transplanted.

“When I came in Monday morning,” Till recalls in an interview with U of T News, “he came down the hall to my office waving this piece of graph paper saying, ‘You’ve got to see this!’”

Till and McCulloch, scientists at the Ontario Cancer Institute, were wary of jumping to conclusions, so they described their findings in 1961 as “spleen colony-forming units.” In later years, they and their collaborators were able to establish that what they had observed were stem cells, and to explain their properties. Their work opened the door to new research with the potential to reshape health care and cure ailments ranging from blindness to cancer.

“For a long time, Till and McCulloch’s discovery didn’t get the attention it deserved,” James Price, president and CEO of the Canadian Stem Cell Foundation, told The Globe and Mail this year. “But they set the stage for all the current stem-cell research, and helped make Canada a magnet for talent and investment in biotech.”

Their research has already paved the way for life-saving treatments, such as bone-marrow transplants to treat cancer.

And their discovery has helped build up regenerative medicine into a global multibillion-dollar industry. By 2021, the market is expected to grow to US$38.7 billion worldwide.

Writing in the journal Nature Medicine in 2005, the research duo said their pioneering work on stem cells shows the value of basic science. “We weren’t deliberately seeking such cells, but, thanks to a felicitous observation originally made by McCulloch, we did stumble upon them,” they write. “Our experience provides yet another case study of both the value of fundamental research and the importance of serendipity in scientific research.”

Without public funding from the likes of the Defence Research Board and Medical Research Council, Till says his research with McCulloch – who died in 2011 – would have been impossible. “We needed a lot of mice, and they were expensive,” he recalls.

His comments come as the government weighs the recommendations of Canada’s Fundamental Science Review panel, which was led by U of T President Emeritus David Naylor. The panel of experts called for a $1.3-billion boost in federal research funding over four years and changes to how it is administered.

In the interview, Till says the federal government and the public should support basic science because “it’s the beginning of everything else."

“What you do with a discovery is create potential for further development,” Till says. “But you have to do the steps in between.”

In 2005, their work was honoured with the Lasker Award, sometimes called the American Nobel. They were both named Officers of the Order of Canada and inducted into the Canadian Medical Hall of Fame.

But if it wasn’t for the support of the federal government, things might have turned out differently, Till says. “Without the support of that first bursary from the National Research Council, I probably wouldn’t have gone on to have a career in research at all.”

Till was born on a farm in Saskatchewan, near the Alberta border. He studied physics at the University of Saskatchewan before obtaining a PhD from Yale. As memories of the atomic bombs dropping  on Hiroshima and Nagasaki were still fresh, Till says he gravitated toward biophysics. “It’s challenging from an intellectual point of view, but it also has the potential to be helpful, which was the kind of motivation I wanted,” he says.

He came to University of Toronto as a post-doctoral researcher. He was reunited with his former master’s supervisor Harold Johns, who recruited him to the research staff at the Ontario Cancer Institute at Princess Margaret Hospital. McCulloch was part of the biology group.

Till and McCulloch are sometimes described as a scientific odd couple because of the differences in their expertise and temperament – Till, the physicist from the Prairies, and McCulloch, a hematologist from Toronto.

“We became friends quite quickly,” Till says.

From their lab benches in the 1960s, they could not have anticipated the vast implications of their discovery. And the full impact of their work may not be known for some time still.

“I believe stem cell research will continue to achieve unexpected things, and that’s the only prediction I’m willing to make,” Till told Maclean’s in 2012. “It will be unexpected because that’s how science functions.”