A dedicated volunteer and philanthropist, Ira Gluskin has contributed to the University of Toronto in numerous ways – and to the wider community, primarily in support of health care, Jewish causes and the arts.

He is the co-founder of one of Canada’s premier wealth-management firms, recognized internationally as a leading securities analyst and an outspoken commentator on the investment industry.

Today, for his outstanding service to the community, and for his leadership in the field of security and investment sector globally, Gluskin receives a Doctor of Laws, honoris causa, from the University of Toronto.

Gluskin graduated from U of T in 1963, earning a bachelor’s degree in commerce nearly three decades after his father, Max, had done the same. In an interview with University of Toronto Magazine, Gluskin said he had chosen commerce because it was a familiar subject. “If [my father] had been an optometrist or a brain surgeon, I’d have probably been that, too.”

After graduating, Gluskin worked in the investment industry for 20 years, eventually becoming president of the securities firm Brown Baldwin Nisker. In 1984, he co-founded Gluskin Sheff and Associates, which became one of Canada’s pre-eminent wealth management firms, employing more than 100 people and handling billions of dollars in assets. He served as the firm’s president and chief investment officer until 2009, and then on its board until 2013.

Around the time he stepped down as president, Gluskin told the Globe and Mail that he had enjoyed managing money because he liked the intellectual challenge. “You’re dealing with all facets of society – business, personal, international affairs, what affects markets and companies… and you’re proved right or wrong sooner [rather] than later.”

Regarding his investing philosophy, Gluskin said he picked companies based on what they said they were going to do and whether they met these expectations – avoiding firms that were always falling short, or failing to be up front about why. He preferred candidness from his own staff as well – “to tell me what’s going on and not go into double or triple talk.”

On a typical workday, Gluskin rose at 6 a.m., spending two hours or more reading several newspapers, including the New York Times and the Wall Street Journal, to keep himself informed, learn about what was driving the market – and to give himself an edge. 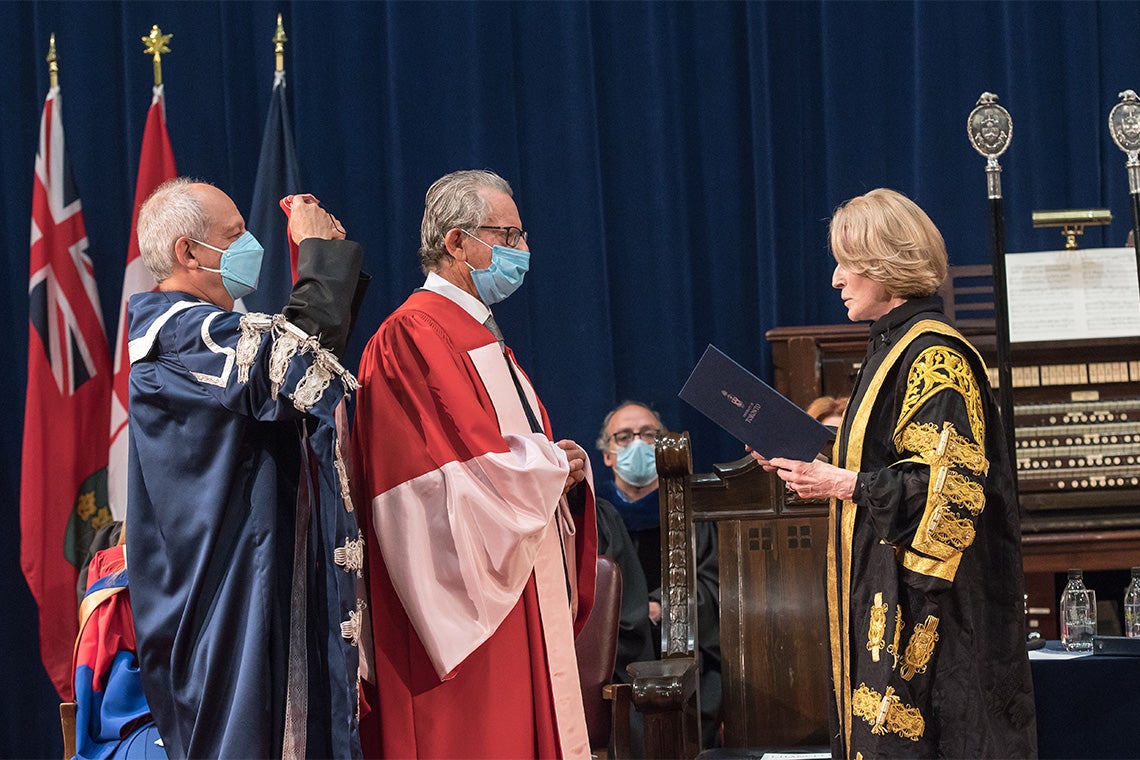 Gluskin often shared his own ideas in newspapers, too, writing on investment topics in the Globe and Mail and the now-defunct Financial Times of Canada. The platform helped raise his profile in the financial industry and earned him a reputation for directness. His former business partner, Gerald Sheff, described Gluskin to Report on Business Magazine as an outspoken commentator. “He writes provocatively,” Sheff said.

Gluskin said he planned to tell graduating students that they have a significant competitive advantage in the workplace over previous generations because of their comfort with technology. New technologies, he explained, have become so pervasive that understanding them is crucial for any career these days – not just those in the tech sector. “The world is favouring young people,” he said, adding that he hoped today’s graduating students will be successful in their endeavours and emphasized the importance of philanthropy.

That spirit of generosity is reflected in Gluskin’s own actions. For many years, he has been a dedicated U of T volunteer, offering his time and talent to the Faculty of Arts & Science and the Temerty Faculty of Medicine, the department of economics and University College, as well as serving as chair of the University of Toronto Asset Management Corporation. In 2000, he received an Arbor Award in recognition of his many contributions to the university.

Gluskin and his wife Maxine Granovsky Gluskin have also made vital contributions to several U of T initiatives, including the lead gift for a renovated and expanded department of economics, which was named Max Gluskin House in honour of Ira’s father. The couple have also provided gifts to establish the May Gluskin Chair in Canadian History, the Anne Tanenbaum Centre for Jewish Studies, and the Granovsky﻿-﻿Gluskin Graduate Scholarship Fund, which supports advanced scholarship in Jewish studies.

Gluskin is active in the broader community as well, serving on the boards of Sinai Health, The Walrus magazine and the National Theatre School of Canada. He is a past trustee of the Toronto Symphony Foundation and The Canadian Jewish News.

In 2012, Gluskin’s contributions to Canada were recognized with a Queen Elizabeth II Diamond Jubilee Medal.