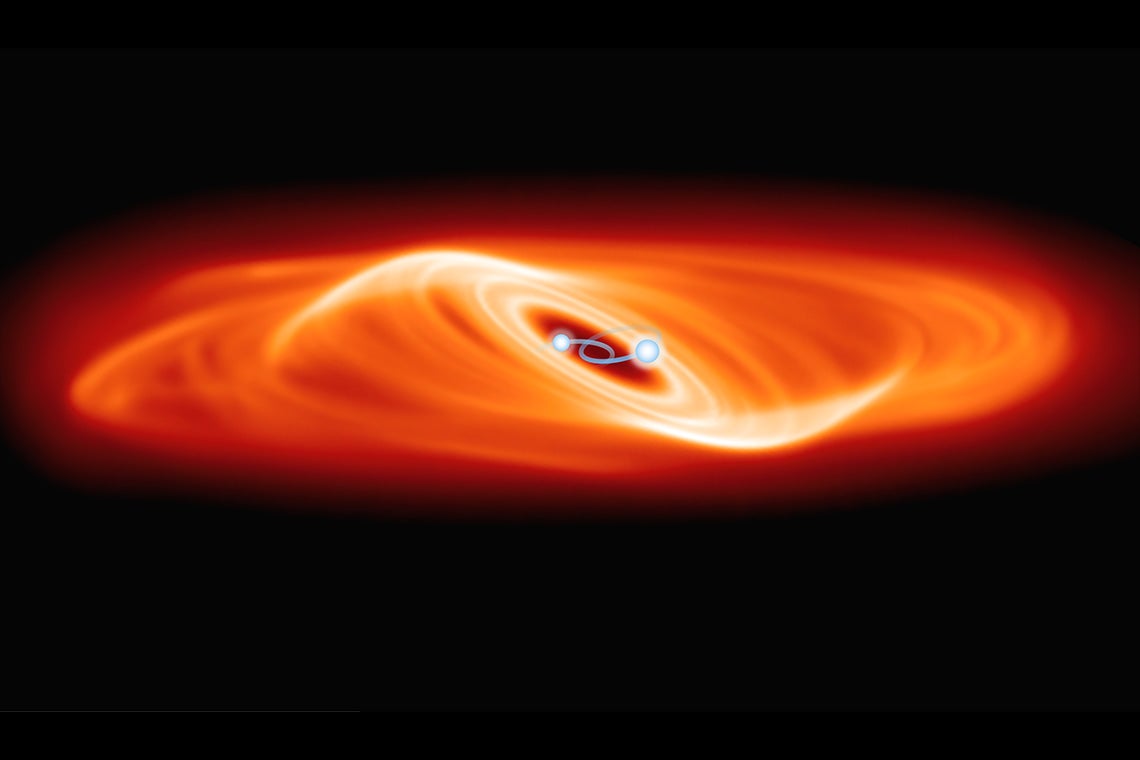 An international team of astronomers has identified only the second and third examples of a rare type of star system comprising two central stars orbiting each other, encompassed by a remarkable disk of gas and dust.

“If there were a planet in one of these systems, it would be like the planet Tatooine from Star Wars,” says Michael Poon, a PhD student in the Faculty of Arts & Science’s David A. Dunlap Department of Astronomy & Astrophysics and one of two University of Toronto researchers involved in the discovery.

“You would see two suns in the sky orbiting each other. In addition, there’s a disk around the stars. Picture Saturn's rings but much, much larger – with the stars in the middle.”

Such disks are referred to as protoplanetary disks because they eventually form into families of planets like our solar system. The newly discovered systems are rare because their disks lie at an angle to the orbits of their central stars.

“The discovery of objects like these is important for our understanding of planet formation,” says J.J. Zanazzi, a postdoctoral fellow in the faculty’s Canadian Institute for Theoretical Astrophysics (CITA). “Planets are born from them so the existence of disks around binary stars shows it’s likely we will find more planets orbiting binaries.

“They’ll also help us understand whether life can exist on a planet that orbits a binary star at an angle because of how that orientation affects temperature and other conditions.”

The discovery of the new objects, designated Bernhard-1 and Bernhard–2, is described in a paper being published July 4 in the Astrophysical Journal Letters.

The lead author is Wei Zhu from Tsinghua University, Beijing, formerly a postdoctoral fellow with the Faculty of Arts & Science’s Canadian Institute for Theoretical Astrophysics (CITA). Zanazzi and Poon are U of T co-authors.

Bernhard-1 and Bernhard-2 are so distant, we can’t see their two central stars individually (such pairs of stars are known as binary stars). Instead, we only see a single point of light and measure the total brightness of the binary.

The researchers identified the new objects by analyzing the complex and distinctive variations in brightness caused by their unusual geometry. A graph of those variations over time is referred to as a light curve and the light curves of the new systems match that of the first such system ever discovered – an object referred to as Kearns Herbst 15D (KH 15D).

The light curves of Bernhard-1 and Bernhard-2 dip to a fraction of their peak brightness – the former for 112 days every 192 days; the latter for 20 days every 62 days. These dips are the sign that one of the stars in each binary is moving behind the disk as seen from Earth. When the star re-emerges, the brightness of the system returns to normal.

Also, when the co-authors compared recent observations with archival data going back decades, they found that both objects varied in brightness over much longer periods. Previous analysis of KH 15D by Poon, Zhu and Zanazzi, along with the work of other researchers, concluded that this long-term pattern revealed that the disk and stars were at an angle to each other.

But KH 15D, Bernhard-1 and Bernhard-2 are rare in that their circumbinary disks are at an angle to the planes of the orbiting stars. Because of this tilt, the disks wobble like a spinning top, a motion referred to as precession, as they move between us and the stars, causing the light of the central stars to dim. For KH 15D, that cycle of dimming could take anywhere from 60 to 6,000 years.

The two types of variations in brightness combine to create the signature light curve of KH 15D-like objects.

The discovery of Bernhard-1 and Bernhard-2 was made when Klaus Bernhard, an amateur astronomer and member of the Bundesdeutsche Arbeitsgemeinschaft für Veränderliche Sterne, analyzed data from the Zwicky Transient Facility. The ZTF’s instrument surveys the entire northern sky every two days, providing data for countless objects over long stretches of time.

Combing through the data, Bernhard uncovered KH 15D-like candidates. He then shared his findings with Poon, Zanazzi and Zhu whose further analysis revealed Bernhard-1 and Bernhard–2.

Now that the researchers have found two more of these rare celestial objects, they are optimistic more discoveries will follow.

“Just this month, Gaia released its most recent data,” says Zanazzi of the space mission that has been observing a billion stars in the Milky Way Galaxy since its launch in 2013. “And now that we have this model for these objects, we’re hopeful we can use it to find more objects to add to the list.”

“We’re also hopeful more observers will look at Bernhard-1 and Bernhard–2 for longer periods,” says Poon. “We’re lucky that KH 15D has been observed at a special time where its orientation causes the light of the central stars to dim. We’re confident that Bernhard-1 and Bernhard-2 also exist in this favourable orientation, so having more observations will increase our understanding of these rare objects.”