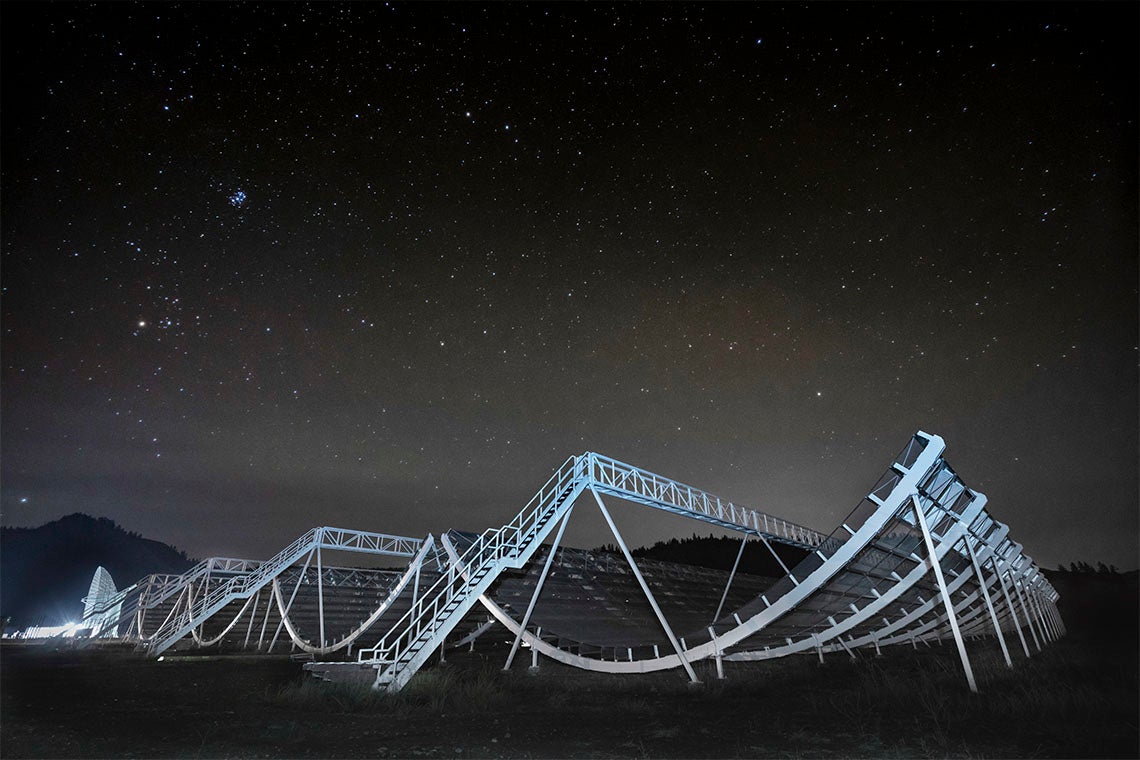 Astronomers in Europe – working with members of Canada’s CHIME Fast Radio Burst collaboration, which includes researchers from the University of Toronto and other universities – have pinpointed the location of a repeating fast radio burst (FRB) first detected by the CHIME telescope in British Columbia in 2018.
The breakthrough is only the second time that scientists have determined the precise location of a repeating source of these millisecond bursts of radio waves from space.
The work, recently published in Nature, relied on eight telescopes – spanning locations from the United Kingdom to China – to simultaneously observe the repeating radio source known as FRB 180916.J0158+65. Using a technique known as Very Long Baseline Interferometry (VLBI),  the European VLBI Network achieved a level of resolution high enough to localize the FRB to a region approximately seven light years across – a feat comparable to an individual on Earth being able to distinguish a person on the moon.
With that level of precision, the research team was able to train an optical telescope onto the location to learn more about the environment from which the burst emanated. What they found has added a new chapter to the mystery surrounding the origins of FRBs.
“We used the eight-metre Gemini North telescope in Hawaii to take sensitive images that showed the faint spiral arms of a Milky Way-like galaxy and showed that the FRB source was in a star-forming region in one of those arms,” said co-author Shriharsh Tendulkar, a former McGill University post-doctoral researcher who co-led the optical imaging and spectroscopic analyses of the FRB’s location.

“This is a very different environment for a repeating FRB compared to the dwarf galaxy in which the first repeating FRB 121102 was discovered to reside.”

Similarly, Mubdi Rahman, a research associate at U of T’s Dunlap Institute for Astronomy & Astrophysics and study co-author, highlighted the significance of finding the repeater in a “star-forming, massive spiral galaxy, relatively similar to our own Milky Way galaxy.”

“These observations seem to indicate that repeating burst sources can live in a variety of different galaxies,” Rahman said.

The discovery lined up with a number of ideas CHIME/FRB researchers had put forward following their initial detection of the burst in 2018.

“The FRB is among the closest yet seen and we even speculated that it could be a more conventional object in the outskirts of our own galaxy,” said co-author Mohit Bhardwaj, a McGill University doctoral student and CHIME team member.

“However the EVN observation proved that it’s in a relatively nearby galaxy, making it still a puzzling FRB, but close enough to now study using many other telescopes.”

Since it began operation in the summer of 2018, CHIME has detected dozens of fast radio bursts, greatly accelerating the rate of discovery of these transient astrophysical phenomena. With over 1,000 antennas, CHIME’s large field of view gives it a much greater chance of picking up fleeting bursts than conventional radio telescopes that are able to observe only a small area of the sky at a time.

When it came to pinpointing FRB 180916, the CHIME/FRB team worked closely with their EVN colleagues to determine exactly where to point the VLBI telescopes.

“By recording and processing the raw signal from each of the antenna elements that make up CHIME, we were able to refine the source position to a level close enough for EVN to successfully observe and localize multiple bursts from this FRB source,” said co-author Daniele Michilli, a McGill University postdoctoral researcher and CHIME/FRB team member.

At half a billion light years from Earth, the source of FRB 180916 is around seven times closer than the only other repeating burst to have been localized, and more than 10 times closer than any of the few non-repeating FRBs scientists have managed to pinpoint. That’s exciting for astronomers because it will enable more detailed study that may help narrow down the possible explanations for FRBs.

“We have a new chance to perhaps detect emissions at other wavelengths – X-ray or visible light, for instance,” said McGill University astrophysicist Victoria Kaspi, a leading member of the CHIME/FRB collaboration. “And if we did, that would be hugely constraining of the models.”

CHIME/FRB is a collaboration of over 50 scientists led by U of T, the University of British Columbia, McGill University, the Perimeter Institute for Theoretical Physics and the National Research Council of Canada (NRC). The $16-million investment for CHIME was provided by the Canada Foundation for Innovation and the governments of British Columbia, Ontario and Quebec, with additional funding from U of T’s Dunlap Institute, the Natural Sciences and Engineering Research Council of Canada and the Canadian Institute for Advanced Research.

The telescope is located in the mountains of British Columbia’s Okanagan Valley at the NRC’s Dominion Radio Astrophysical Observatory near Penticton. CHIME is an official Square Kilometre Array (SKA) pathfinder facility.