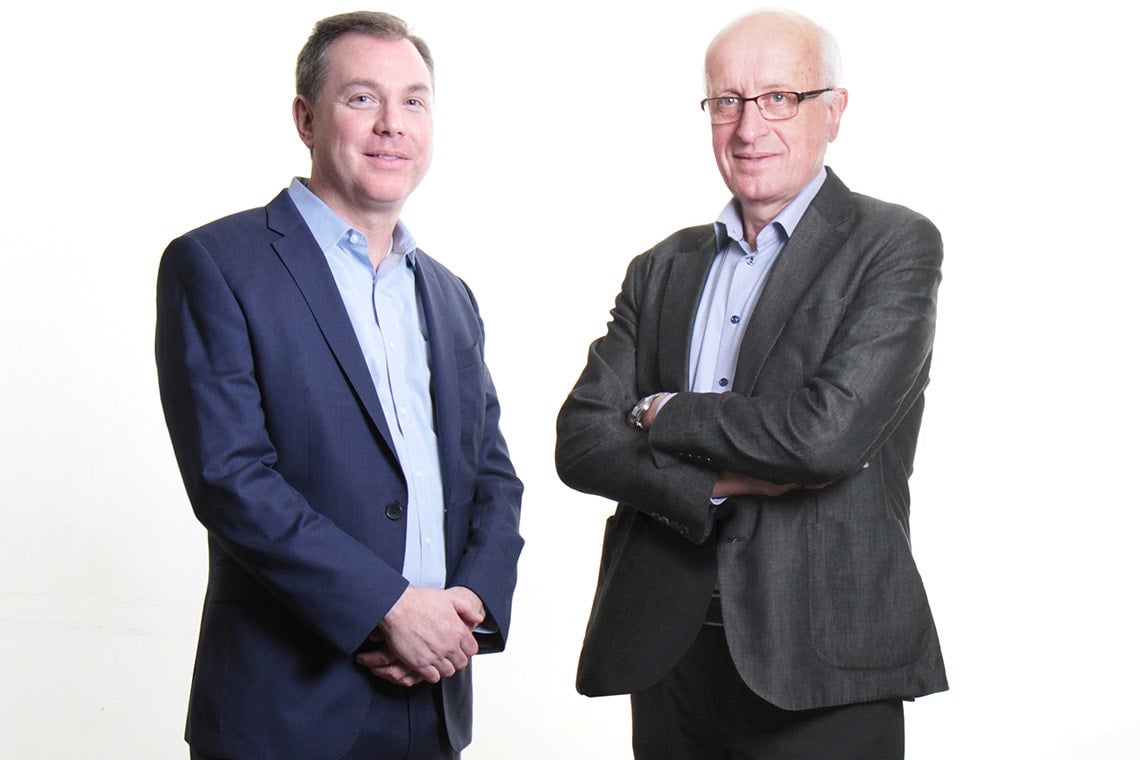 When a person has a heart attack, working cardiac muscle dies and is replaced by scar tissue. Treatments are few and those that are available are mostly aimed at slowing the progression of the patient’s underlying heart disease, rather than restoring function to the damaged part of the heart.

But what if doctors could inject heart muscle cells derived from stem cells into the ailing organ to repair it? That is the question Michael Laflamme has been working on for nearly his entire research career. In 2015, Laflamme came to Toronto from the University of Washington to further his work in cardiac regenerative medicine. Soon after his arrival, he was named to head an interdisciplinary team of investigators funded by the University of Toronto’s Medicine by Design initiative to fast-track cardiac cell therapy.

“I think things are going well,” says Laflamme, the Robert R. McEwen Chair in Cardiac Regenerative Medicine at the McEwen Centre for Regenerative Medicine and a senior scientist at University Health Network’s Toronto General Hospital Research Institute. He credits “the hothouse of talent that has clustered so many scientists, entrepreneurs, support workers and a lot of generous philanthropy in the regenerative medicine ecosystem here. I saw Toronto as an opportunity to get things done faster but also better.”

Laflamme, who is also an associate professor at U of T’s department of laboratory medicine and pathobiology, put together a team of about two dozen scientists that includes three co-principal investigators, as well as post-doctoral fellows and graduate students. Using a variety of non-human studies, team members are working to overcome important but surmountable hurdles that lie in the way of using stem cell-derived cardiac muscle cells, or cardiomyocytes, to repair damaged muscle after a heart attack.

Laflamme’s project is one of 19 collaborative team projects funded by Medicine by Design to accelerate discoveries in regenerative medicine and move them from the lab to patients more quickly. If successful, the cardiomyocyte transplant project could help restore function and health in patients experiencing heart failure after a heart attack.

“We’ve made a lot of progress toward that end goal,” Laflamme says, adding that if his team can overcome the last hurdles in the animal models, a first human trial using the new technologies could take place within the foreseeable future.

The University of Toronto is committed to the highest safety standards in its laboratories. Laboratory activities depicted in this video were simulated, and therefore personal protective equipment (PPE) shown is appropriate for the purposes of filming, but not necessarily sufficient for the research activities shown. If you have questions regarding PPE requirements used when actual lab work is being conducted, please visit the University of Toronto’s Office of Environmental Health and Safety.

Moving these new cell therapies from the lab to patients is one of the foundational programs of BlueRock Therapeutics. The company, which was created in late 2016 with a US$225 million investment from Bayer AG and Versant Ventures, was drawn to Toronto because of the world-class research of Laflamme and co-investigator Gordon Keller, director of the McEwen Centre for Regenerative Medicine at University Health Network. A new treatment for heart failure based on their cardiac regeneration research would have enormous health and economic impacts: 600,000 Canadians are currently living with heart failure and an additional 50,000 are diagnosed with it each year, costing more than $2.8 billion annually, according to the Heart and Stroke Foundation.

One of the challenges the researchers face is improving the population of stem cell-derived cardiomyocytes that will become “the ultimate best cell type” to regenerate hearts. This is where Keller, who is also a professor of biophysics at U of T, comes in. He had already worked out some of the techniques to steer stem cells into becoming heart muscle cells. In the Medicine by Design project, his role is to refine these techniques to obtain specialized cardiomyocytes called compact ventricular cells, which have the most contractile force, the best electrical properties and the best metabolic properties of any heart muscle cells.

The myocytes being made now are quite immature, he says, assessing them to be at a fetal stage of human development. His lab is nudging the cells along the differentiation pathway to reach a newborn stage. “We believe that as the myocytes become more mature, they may function better in the heart following transplantation.” Cell maturity is assessed by analyzing electrophysiological properties and genes and protein expression profiles.

One of the most significant hurdles the research team needs to overcome before they can transplant these stem cell-derived cardiomyocytes into humans is arrhythmias, or irregular heartbeats. Such arrhythmias have occurred in the animal models studied so far. They are transient, lasting only three or four weeks post-transplant, at which time the animals’ hearts return to their normal rhythm. But even short-lived arrhythmias are unacceptable when it comes to cell transplants for human patients down the road.

Laflamme hypothesizes that a defect in a particular protein that helps determine the electrical function of the cardiomyocytes may be driving the arrhythmias. To get around the defect, his lab is using genetic engineering to create cardiomyocytes that should have improved capacity for electrical integration with host muscle and each other. “The idea is to improve the speed at which the electrical impulses pass from graft to host and through the graft tissue, which might reduce or eliminate the arrhythmias,” he says.

Laflamme’s team also needs to ensure the safety of transplanted tissue. “When scientists grow cells in a dish for a long time, they’re prone to developing genetic abnormalities,” Laflamme explains. “People worry about the possibility that the cells could grow out of control,” or become tumours. The problem is magnified when stem cells are grown to replace cardiac tissue because so many cells are needed for the transplant – in the order of billions per heart. “The more cells you deliver, the more the tumorigenic risk.” This is where the work of co-investigator Andras Nagy (pictured left) comes in. Using genome engineering technologies, Nagy has developed a strategy in which he can selectively kill off any tumorigenic cells in the culture, leaving the useful cardiac cells intact.

“A cell is damn smart,” says Nagy, a senior investigator at the Lunenfeld-Tanenbaum Research Institute at Sinai Health System. “I told my students that we have to come up with an idea that we can prove we are smarter than a cell.”

They did just this by creating a population of “fail-safe” cells genetically modified with a “kill switch.” This is an ingenious bit of genetic engineering that involves piggybacking an introduced suicide gene on top of genes that are absolutely necessary for the cells to divide. If the cell somehow finds a way to get rid of the suicide gene, it also gets rid of its own genes essential for cell division, shutting down its ability to divide – and potentially forming a tumour.

Assuming these obstacles to cardiomyocyte transplantation are overcome in the next few years, how will researchers know their engrafted cells are working in their human patients? In the models studied so far, the animals’ hearts are harvested at the end of the experiment and researchers can examine the tissue under a microscope to find out what happened to their cells. In humans, however, it’s necessary to know how the cell graft is functioning while the patient is alive. Co-investigator Hai-Ling Margaret Cheng (pictured left), an assistant professor at U of T’s Institute of Biomaterials & Biomedical Engineering and the Edward S. Rogers Sr. department of electrical and computer engineering, and a member of the Ted Rogers Centre for Heart Research, has developed labels based on magnetic resonance imaging (MRI) that let researchers see transplanted cells non-invasively in living, beating hearts. MRI technologies can be used to measure things such as contractile force, how well the heart is squeezing as a whole, and how well it is contracting in specific areas. Adding Cheng’s innovative technology will allow researchers to determine whether the part of the heart with the graft cells is doing better than the part without the graft and assess the success of the transplant.

Laflamme credits Medicine by Design’s collaborative, interdisciplinary approach with helping move the bench science along more quickly to a stage where discoveries can actually be used to help human patients.

Nagy concurs. “It’s probably the whole spirit of the Toronto science; it’s not just the University of Toronto, but all the affiliated institutions,” he says. “Historically, this place is very collaborative. We talk to each other; we like to work with each other; we are not competing with each other. We are actually doing things together. That’s a major strength with this place. And that’s what Medicine by Design encourages.”

Keller says the Medicine by Design approach is “the only way to tackle this type of big research project and move it forward. It takes a team effort.”

And Shunsuke Funakoshi, a post-doctoral researcher from Japan who is working with Keller, says the project gives him the opportunity to meet with many researchers in different branches of science regularly.

There is optimism across the board that success is near.

“It’s going to come down to how long these hurdles take to overcome,” Laflamme says. Solving the problem of arrhythmias in the injected graft cells is the last big obstacle. “If we can overcome that one, I think something like a four- to five-year time horizon to a first in-human study is very doable.”

Medicine by Design is made possible thanks in part to a $114-million grant from the Canada First Research Excellence Fund, the single largest research award in the University of Toronto’s history.