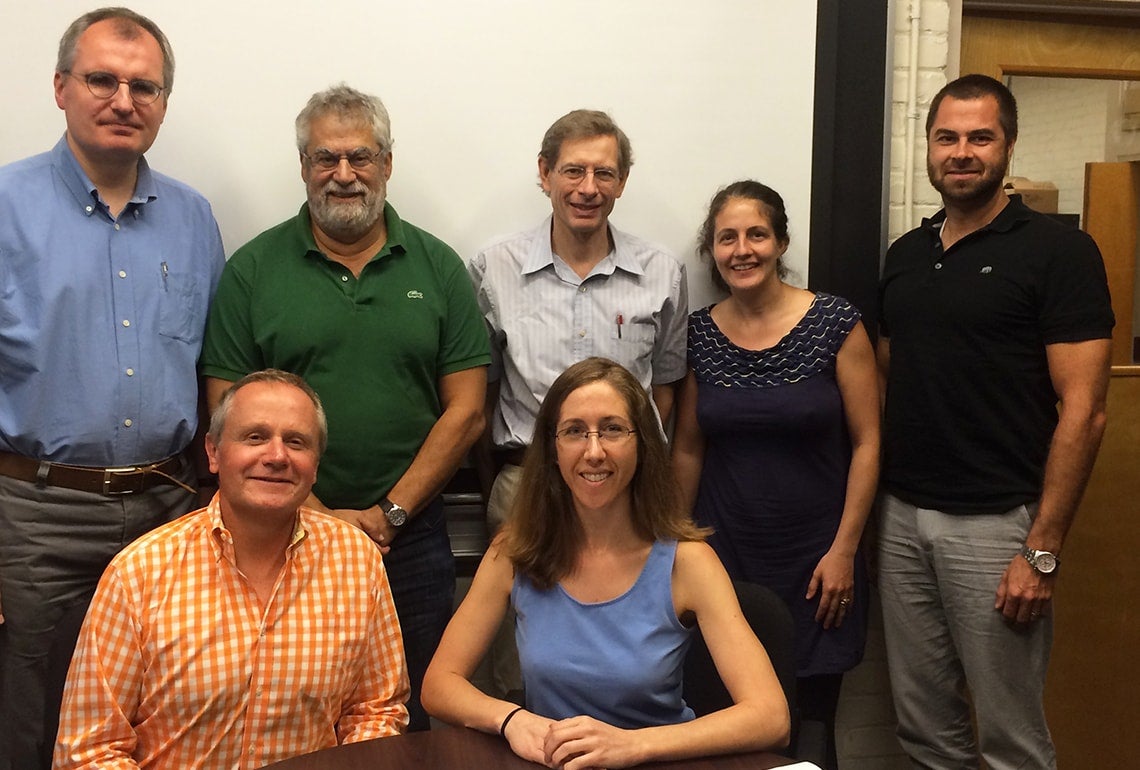 If you suffer a debilitating muscle injury, a tissue graft often offers the best hope to restore lost function.

But the procedure, in which surgeons replace the damaged muscle with healthy muscle from another part of your body or from a donor, can be limited by the availability of grafts and the tendency for the new tissue to die before it incorporates into your body.

That’s why a multidisciplinary team led by University of Toronto biomedical engineering expert Michael Sefton is taking a different approach – one that could revolutionize how doctors treat skeletal muscle injuries.

Instead of replacing injured tissue, the researchers are exploring ways to stimulate muscle to fix itself, a process known as endogenous repair. To do this, they are testing whether a novel biomaterial scaffold can coax stem cells that are present in the muscle to spring into action to heal traumatic injuries.

The project is one of 19 collaborative projects Medicine by Design is funding to accelerate discoveries in regenerative medicine and move them from the lab to patients more quickly. If successful, the team’s approach could shorten recovery, reduce pain and restore function sooner in patients around the world who suffer skeletal muscle injuries in car accidents, natural disasters and war.

“Medicine by Design pushed us to think outside of our current comfort zone and think about what we could do if there was money available and your pick of who you wanted to work with,” says Sefton, a University Professor, the Michael E. Charles Professor of Chemical Engineering, and a faculty member in the department of chemical engineering and applied chemistry and the Institute of Biomaterials & Biomedical Engineering (IBBME) at the University of Toronto. “That is the transformative part of Medicine by Design.”

Like all the team projects Medicine by Design funds, Sefton’s project brings together researchers from diverse fields with the goal of making game-changing breakthroughs. About 20 people comprise the team, including clinicians, scientists and engineers who are experts in tissue engineering, stem cell biology and medicine, as well as post-doctoral fellows and graduate students. Each of them brings important expertise to the project.

Penney Gilbert, a co-principal investigator on the team, is trying to determine the cues that prompt stem cells in the muscles to repair skeletal damage. Stem cells make up just one per cent of the cells in skeletal muscle tissue, she says, and usually they do nothing. “They’re just sitting there,” says Gilbert, an assistant professor at IBBME. “But any time the muscle is damaged, these stem cells ‘wake up’ and make more copies of themselves to repair the tissue.” Understanding that process is critical to being able to boost muscle stem cell capacity for repair when the muscle damage is more substantial than the natural repair process can normally overcome. 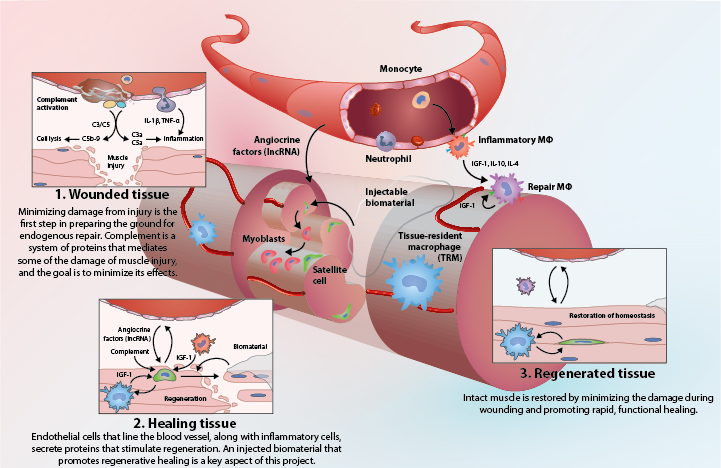 The illustration above shows endogenous repair.

Her group’s approach to the stem-cell mediated repair of skeletal muscle is different than other stem-cell work going on locally. “A lot of the work that’s happening in Toronto is saying, ‘let’s actually take those stem cells out of the body and get them to make tons of copies of themselves, and then we’ll put them back in the body where the body needs them,” she explains. “We’re saying, ‘let’s not take them out; let’s leave them in. Our stem cells are best at repairing us, so let’s not manipulate them outside the body, but let’s give them some help.’ ”

This is where Sefton’s work comes in. The endogenous repair project uses biomaterials designed in his lab to work as a proxy for known protein cues, and new protein cues identified by Gilbert, that encourage the stem cells to wake up, make lots of copies and repair muscle fibres. One of the biomaterials he works with, a polymer dubbed MAA, is an injectable liquid that gels in place. Working in a mouse model, Sefton’s lab is attempting to tweak the gel to make it more effective at what it does. Does it help to rebuild the damaged muscle? If so, is the muscle rebuilt faster than if they had done nothing? And, does the muscle generate the contractile force required for it to work properly?

Another part of the team, led by Philip Marsden, a clinician scientist and nephrologist at St. Michael’s Hospital, is looking at the role of blood vessels – specifically, the endothelial cells that line the vessels – in skeletal muscle repair. These cells control how blood gets into the muscle, how it nourishes it and how waste products are removed. In light of these functions, understanding how endothelial and stem cells communicate is central to being able to prod muscle stems cells to do their jobs.

“Stem cells and endothelial cells live together in a little neighbourhood called a niche environment,” Marsden says. “They sit right next to each other and one cell says, ‘Hi, how ya doing today,’ and it gets a message back from the other cell. The endothelial cells are absolutely key in helping set up a nice healthy environment.”

Other collaborators include Alison McGuigan from the department of chemical engineering and applied chemistry, who is developing new culture tools to test the team’s discoveries in a dish; Clint Robbins from Toronto General Hospital Research Institute and the department of laboratory medicine and pathobiology; Myron Cybulsky from University Health Network and the department of laboratory medicine and pathobiology; experts in macrophage biology who are working to understand how the immune cells that are present in skeletal muscle contribute to tissue repair; and Christoph Licht, a staff nephrologist at SickKids who is focused on the role of the complement system (small proteins associated with the initial response to injury) in skeletal muscle regeneration.

Researchers involved in the endogenous repair project have nothing but praise for Medicine by Design. Gilbert says the funding has accelerated the time frame of her lab’s path of discovery. “It’s allowed us to think about our research from really different perspectives that we may have gotten to some day, but maybe not for decades, literally.”

She adds that the endogenous repair group really exemplifies the spirit of Medicine by Design. “It’s amazing,” she says. “Michael put together a great group of people, everyone is enthusiastic, and things are moving along really quickly. We have stem cell biologists and physicians and engineers and biomaterial experts and computational people all working together. You can see the progress even in just a short time.”

Marsden also credits the convergence of diverse expertise as key to the project. “When you bring different science fields together, it’s at the junction of those fields where the most novel discoveries are made,” he says. “The sum of the parts is not A plus B, it’s A times B.”

Sefton, who recently became executive director of Medicine by Design, says the award has given his team “an opportunity to do something different that hadn’t been done before, that was not incremental.” But he also acknowledges a potential downside to taking such a non-incremental approach to the research.

“It could fail,” he says. “We had this idea for a new material and step one worked, step two worked, but it will be step 10 before we know whether it really works. And will the muscle that is generated have the force and functionality that we need?”

Miranda Carleton, a MASc candidate in Sefton’s lab, was attracted to using therapeutic biomaterials in skeletal muscle repair because she believes they could help create simple, cost-effective treatments for many diseases. “I liked the idea that my research could have an impact on an unmet medical need, as there is no treatment that can fully restore function after serious muscle injuries,” she says.

She has particular praise for the way the Medicine by Design approach fosters collaboration among scientists with disparate interests and expertise. Trainees like her in the endogenous repair group meet once a month to discuss the current state of research and to look for concepts and modalities that they can adapt. There is also a monthly meeting of the students and principal investigators where they discuss the progress of everyone’s research.

“What I value from these meetings is the chance to network with people from other labs,” Carleton says. “Because each lab in our group has different expertise, they all provide a different perspective to the problems we face.”