Innovations in teaching: Inside Con Hall with Mike Reid 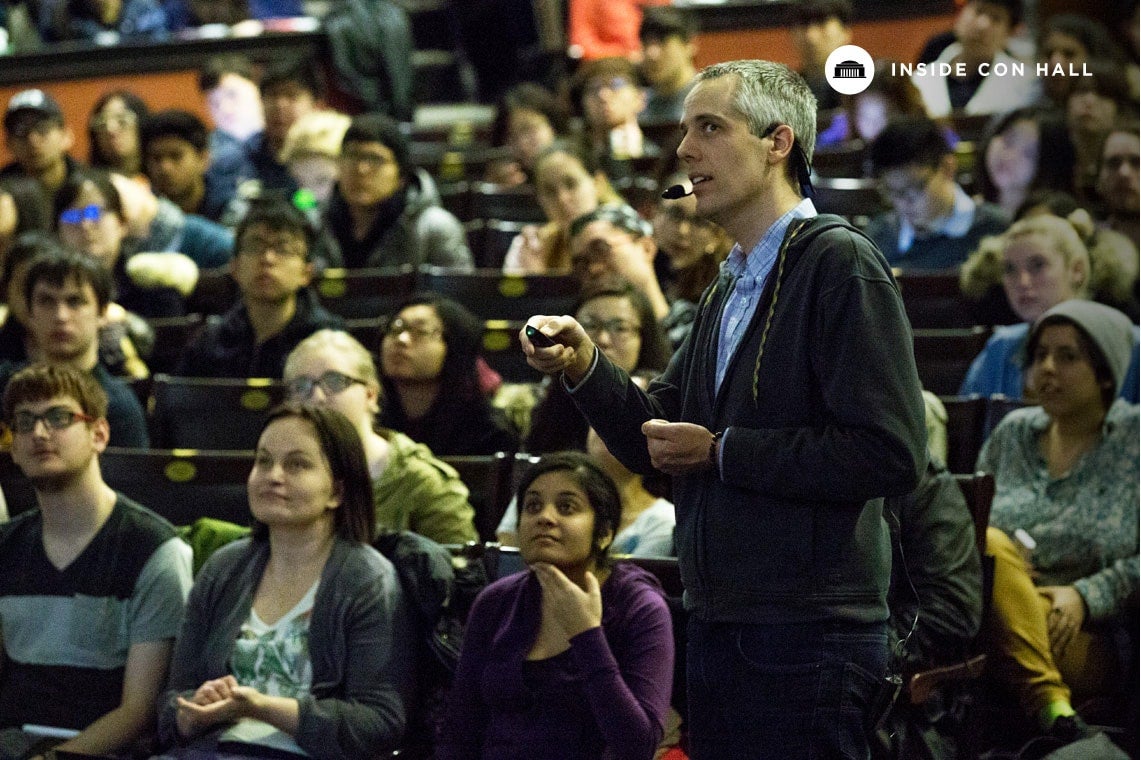 All photos by Johnny Guatto

“You just can’t be sure. Every day in that class, some student is on the verge of meowing. Or trying to film a Harlem Shake video.

“After a while, you learn to expect it.”

Mike Reid has taught introductory astronomy courses inside Con Hall, the neoclassical domed rotunda that dominates the University of Toronto’s downtown Toronto campus, for seven years. And he has seen it all.

“On the first day of one of my classes, there were two students meowing like cats. They were in the upper balcony, and they were meowing back and forth – and it would get louder and louder and louder.

“I finally just told them, ‘Please stop talking. You're irritating everybody,’ and they quieted down.”

Reid attributed the incident to “a bunch of students who had just had too much caffeine” or just “goofing off,” until a student came up to him after the lecture, and suggested the possibility that the student or students responsible might have had a disability.

“I felt so bad. I thought, ‘What if I had just humiliated a student in front of the entire class?’ So I sent out a note to the entire class, saying ‘if that was you and you have a disability, here’s what you can do.’”

A student posted the email on Reddit, which began a long thread (with comments, in the Reddit way, ranging from supportive and sincere to silly and profane). The attention the note received was embarrassing, Reid says, but he stands firmly behind his commitment to accessibility. The diversity of students in his Con Hall classes with respect to disabilities, age, and disciplinary backgrounds is something he says he needs to be aware of and accommodate.

Reid teaches two classes in Con Hall and says he has to ensure that every aspect of those courses – The Sun and Its Neighbours (AST101) and Stars and Galaxies (AST201) – is worked out carefully in advance.

“I’ve learned to be organized like I never was before. The amount of planning that’s required to do a Con Hall class is vastly, vastly more than smaller courses. We start thinking about our next year in Con Hall while we’re still doing the previous year. It’s a huge amount of work to make those courses run smoothly.”

All that careful planning ensures there is room for spontaneity: Reid always welcomes questions during his lectures. He teaches with a co-instructor, which allows for one person to be on stage, speaking, while the other can roam the hall, handing a wireless microphone to any student with a raised hand.

“We try to emphasize right from the first day that if you want to talk, you’re welcome to talk. What you have to say is important. We try to have a two way conversation.” 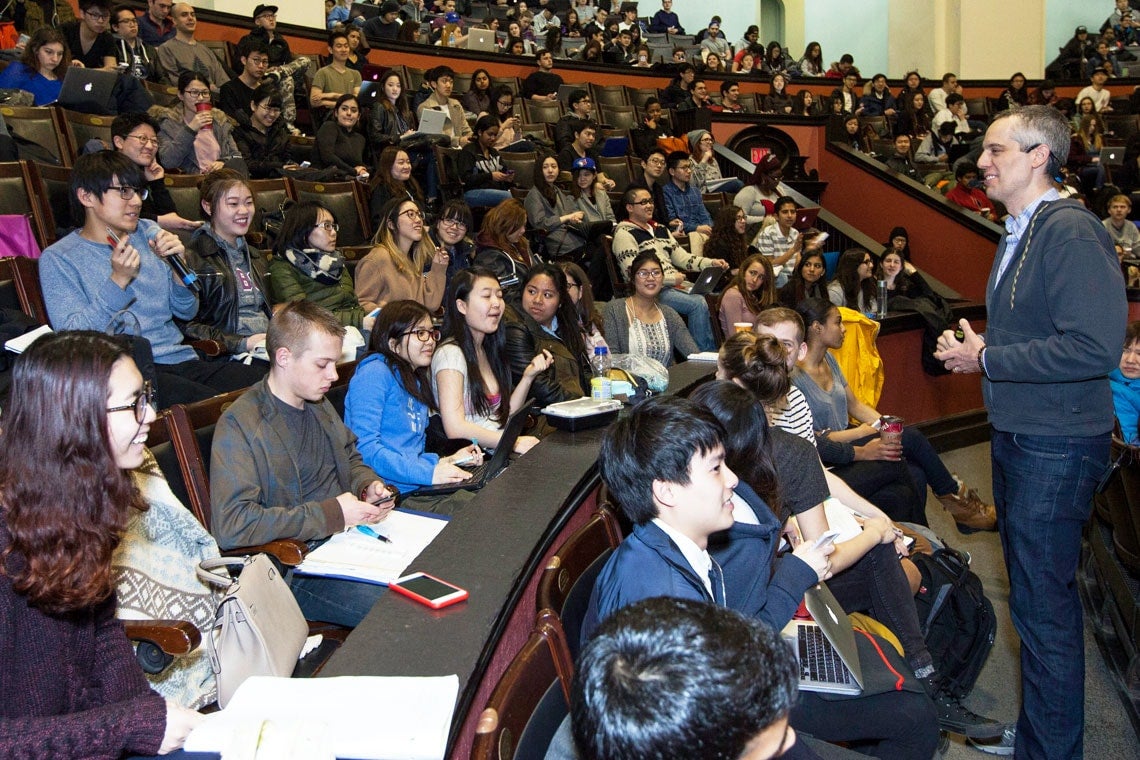 Reid disagrees with people who don’t believe that you can teach a large class well, but he says Con Hall does require an instructor to be open to changing teaching styles.

“The old way of doing things is being ‘the sage on the stage.’ You come in and you talk, and the students just absorb all of your wonderful wisdom. I’ve certainly learned that you just can’t do that in a class like Con Hall – not if you want the students to have a good, meaningful experience.”

Students will tune out if they don’t feel a personal connection with the professor in a large class, Reid says, and it’s crucial to make sure students don’t feel anonymous or lost in a crowd.

“If you feel like the experience has nothing to do with you personally, why would you engage?”, he asks.

“I want to create an environment where all of the students feel like they all want to personally engage. They’re paying a lot of money for this, and I want them to get a useful experience out of it.”

Like others who teach in Con Hall, Reid has found that there can be advantages to having such a large class.

“Every time I’m in there, there are always several people in the room who are having a good day. They’re energetic and they’re really there for that class. So if we start a discussion with that many students in the room you can be sure that there will be students that will engage and stimulate the other students.”

Over the years, Reid has learned a lot about what to expect at Con Hall, but he describes Halloween as a time he absolutely dreads. The last time his class fell on Halloween, Reid witnessed a group of Power Rangers run through the hall in their costumes, and had to compete with other students’ incredible make-up and costumes for the attention of the class.

“In the middle of the class, he got up, walked up onto the stage, and just stood in the middle of it. I’m horrified because my co-instructor is teaching, and she’s never taught before in such a big room.”

Reid says his co-instructor handled the situation impeccably, however.

“She didn’t miss a beat. She just went up to him and leaned on him like he was a podium, and kept delivering her talk exactly as she had intended to as though he wasn’t there, and the class thought this was hilarious.”

For Reid, teaching such a large class is a way to get as many students as possible excited about his field. He’ll seize almost any opportunity to win students over to astronomy. That Reddit thread? Despite some initial embarrassment about the attention, Reid joined the thread himself to encourage more students to take the course.

“While we're on the topic of my course: if you're a student at UofT or thinking of becoming one, hey, why not take my course?” Reid wrote. “Clearly people like it enough to reproduce my e-mails on Reddit, so you can't go wrong.”