Innovations in teaching: Inside Con Hall with Christian Caron

“I was scared, to be quite honest” 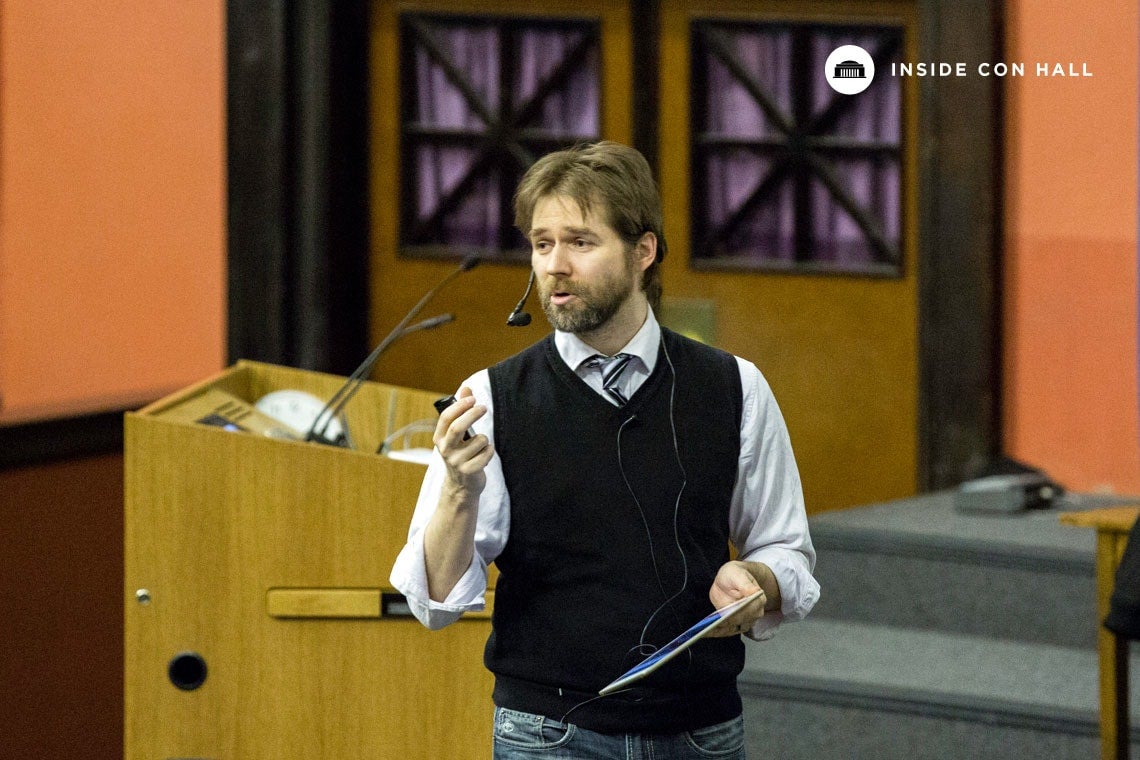 All photos by Johnny Guatto

“When you start out, it’s a room full of strangers,” Christian Caron says.

A really big room. Filled with about 1,500 strangers.

When Caron began teaching Introduction to Sociology (SOC101Y1) in Convocation Hall he says the prospect of such a large class and such a huge space was frightening.

“I had taught classes of 400 or 450 students before teaching in Con Hall, but there’s something different about the size,” Caron says. “I feel very comfortable with public speaking, but something about being in Con Hall brought back the nerves, the fright, the ‘oh my gosh, I’m not prepared,’ the butterflies that I used to have back in high school. I was scared, to be quite honest.”

An expert in sociology, Caron says his first line of attack was to look at the class as a bureaucracy.

“You’re trying to take advantage of all the best practices but knowing that at the end of the day you want the students to be able to connect. It’s about trying to create some energy in the two hours that we’re there, so it becomes interesting to come and it feels like you’re getting something different than reading the textbook or listening to a recording.”

Caron says he has learned to ask himself what is possible at Con Hall, rather than what isn’t.

“It’s important not to treat this like ‘well, I can’t do x, y and z, it’s too big. You see Con Hall with all of these limitations, and very few people think Con Hall is necessarily an ideal learning environment – especially if you could choose to only have classes with 30 or 40 students. But these limitations are not set.

“In fact, there are benefits sometimes to having that many students. If I open the floor up for 15 minutes of conversation, there’s such a diversity of students, you’ll get 15 or 20 hands of people who are willing to comment or make a reflection.” 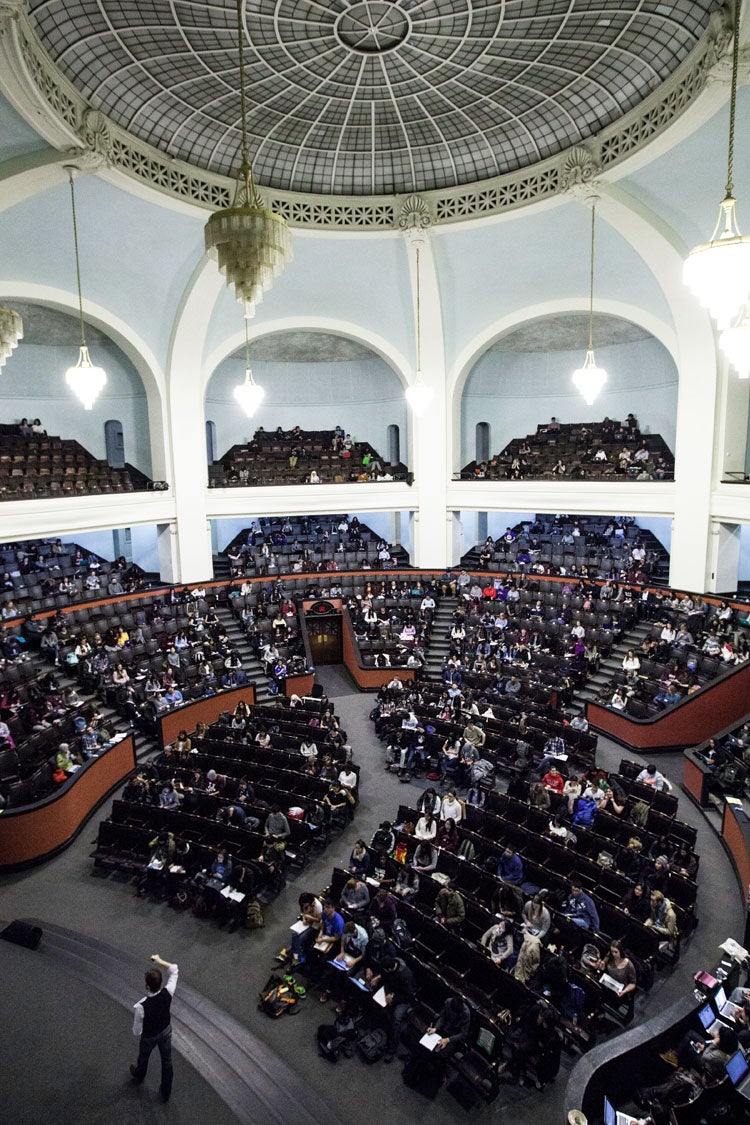 Emily Kot is a second-year student who took SOC101 with Caron in her first year. She also  worked with Caron as a research assistant through the Research Opportunity Program, examining the pedagogy of sociology.

When Caron talked about adapting his teaching style to the large introductory courses “he was very passionate about trying to make the course meaningful to every student in the class – regardless of whether they were hoping to pursue a sociology specialist or just taking it as a breadth requirement,” Kot says.

For students who, like Kot, found the idea of office hours “daunting”, Caron had alternative measures in place so students could approach him for help.

“What really helped within the large size context was his Twitter account, as strange as it sounds. I tweeted several questions at him very late the night before a major assignment was due because I’d left starting it far too late, and he responded almost immediately. It was great to have that kind of support.”

“This was my largest course but I felt more connected with the material and course topics in SOC101 than with courses with fewer students.”

“Part of what you’re doing up there on stage is a performance. We’re dealing with serious issues, a lot of complicated ideas, and talking about tough social problems, but it doesn’t mean I have to take myself too seriously.

“You’re hoping to get students to laugh a couple of times during the class, and you’re projecting your voice to try and captivate the audience, which means talking with a level of energy that wouldn’t make sense in a group of 20.”

The size of Con Hall, which initially worried Caron, is now precisely what he loves about teaching in it.

“My favourite parts are what makes Con Hall distinctive. It’s a lot of people. When things are going well, when the topic is interesting, when the students are really engaged, you can feel it during the moment and see it afterward.

“Sometimes 50 minutes afterward there will still be a line of people who are there to talk about why that topic spoke to them, and there’s something they want to share or ask a follow up question,” Caron says.

His nervousness sometimes resurfaces, Caron says – like when his parents are seated in the second-tier balcony.

“They came down for a visit from Montreal, and they were here on a Wednesday at the end of last year so a couple of students wrote me, and asked, ‘Was your dad here? Because there was a man that looked a lot like you but older, and he looked like he was nervous for you.”

But after three years of teaching at Con Hall, Caron says he’s no longer afraid.

“The fear that was there at the very beginning has now turned into an exhilarating energy. There’s something unique about being in that room that’s unlike any other class.”