Innovations in teaching: Inside Con Hall with Ashley Waggoner Denton 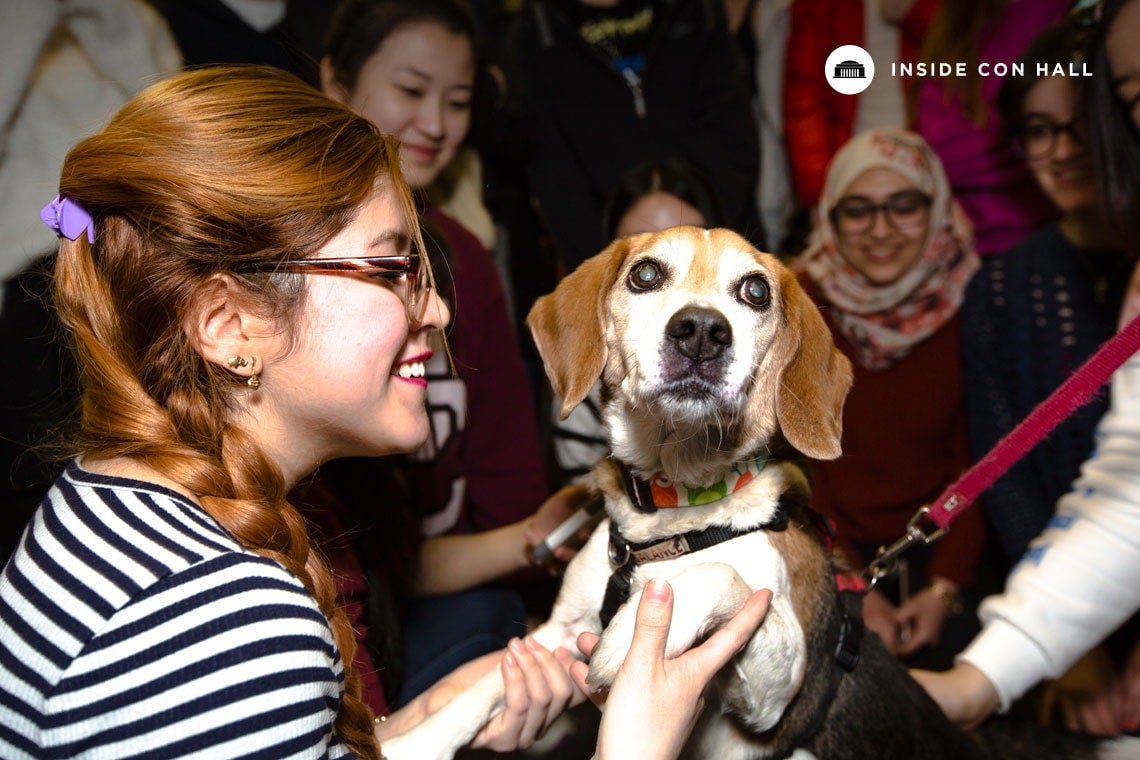 All photos and video by Johnny Guatto

Con Hall has dominated the downtown Toronto campus of the University of Toronto for more than a hundred years. With its domed rotunda and neoclassical finishes, the 1,730-seat building has played host to everyone from graduating students at Convocation to the mathletes of Mean Girls.

The dog was the special guest recently of  Ashley Waggoner Denton. A professor in the teaching stream, Waggoner Denton has been teaching Introduction to Psychology (PSY100) at Con Hall since 2012. She recently brought in a dog trainer and her dog to help explain operant conditioning during a lecture on learning.

When Waggoner Denton found herself teaching the very course she took at Con Hall during the first year of her own undergrad at U of T, she wrote on her syllabus: “Welcome to PSY100! This is the course (and Con Hall is the place) where I fell in love with psychology, and I hope that you will too.”

But she knew for many students the size of the hall would be intimidating.

“It is possible to create a warm learning environment even if it is in this really big, seemingly daunting place,” she says. “It’s still possible to have those connections with your students and to create an environment where the students feel they’re a part of something, that they aren’t passive listeners.

“On the first day of class, I try to make it clear that I do care. I just try to be as welcoming as I can – the majority of the students are in first year so it can be an incredibly new, overwhelming experience.”

Waggoner Denton says her goal in a Con Hall class is to get students excited about the material so that they’ll be inspired to learn more about something she brought up in class, or go to tutorial to get the extra help that they need.

“This semester during our class on sensation and perception, we had a man who’s known as ‘Patient George’ come in. He has a very extreme form of multisensory synesthesia, and he developed it after having a thylamic stroke. He was very engaging, and he was mobbed by students at the end, wanting to talk with him and ask him questions. He gave a better appreciation for what goes on in our brains to give us these perceptual experiences.”

Chelsea Spagnolo, a fourth-year psychology specialist, has now taken four classes with Waggoner-Denton. She says she’s noticed the lengths Waggoner-Denton has gone to in order to make students feel welcome.

“She definitely made sure to wait around after class so students could ask questions. Sometimes students just lined up to make a quick comment about the course or to chat, but she didn't rush anyone and would stay well past the end of lecture to ensure all questions were answered. 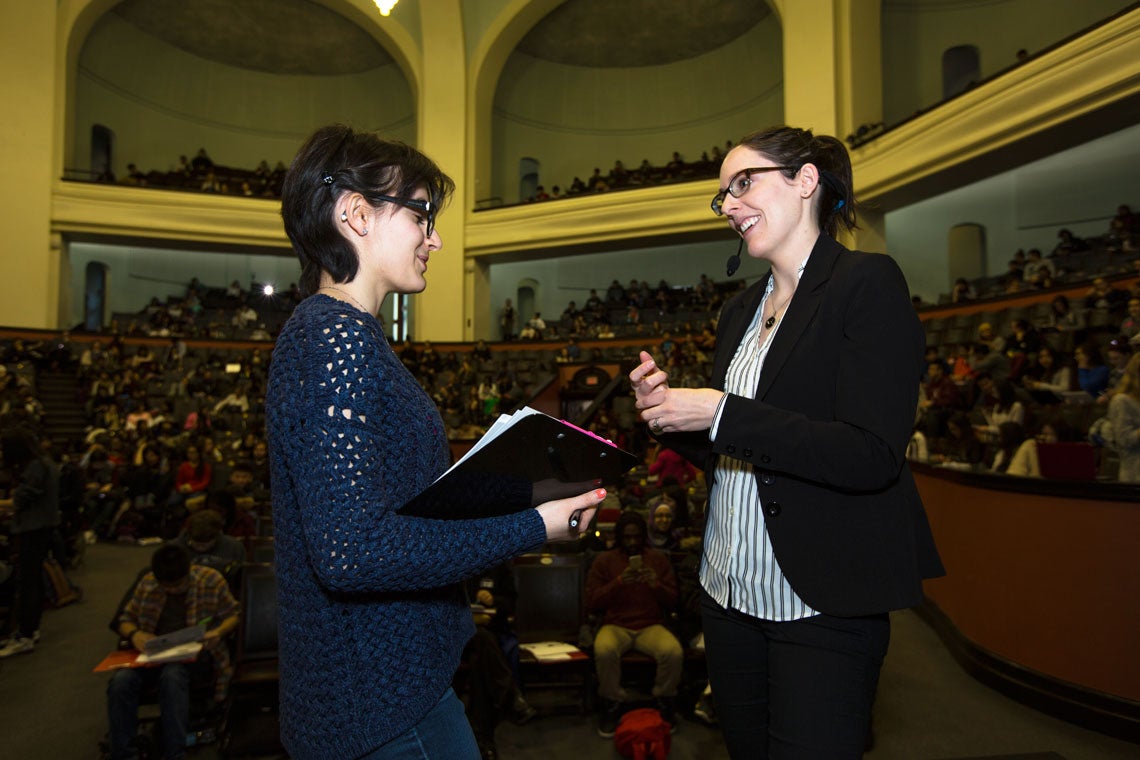 Waggoner Denton’s favourite moments at Con Hall: watching the reaction of her students to classroom demos.

“To hear 1500 students react is really cool, and that’s something you don’t get if that was a class of 30. It wouldn’t be the same experience. It can be really fun to try to blow the minds of 1500 students at the same time – not that I’m always blowing their minds, but I try!”

But teaching at Con Hall does not go without challenges, Waggoner Denton says.

“In a lot of my more typical classes, I like to have a lot of interaction or get discussions going, and that’s probably the most challenging part of Con Hall, having that physical distance between myself and the students. If I can’t speak with the students, I’ll pause and have them talk among themselves for a few minutes or to do something to get them thinking about things – having them at least talk to each other if they can’t talk to me.

“It’s also oddly exhausting. Everything just seems bigger: you’re trying to be bigger, the screen is bigger and your voice is louder. I come out of it, and I’m usually starving and exhausted and I feel like I’ve run a marathon. It’s fun and I love it, but it’s intense.”

Waggoner Denton’s top tip for anyone teaching a first class at Con Hall: Don’t be scared.

“Everything’s bigger, but it’s still just a classroom and you have a bunch of really motivated students who are there to learn. I don’t think it’s as scary as a lot of people who haven’t taught a class in there imagine it to be.

“It’s fun to look out and just see this sea of faces.” 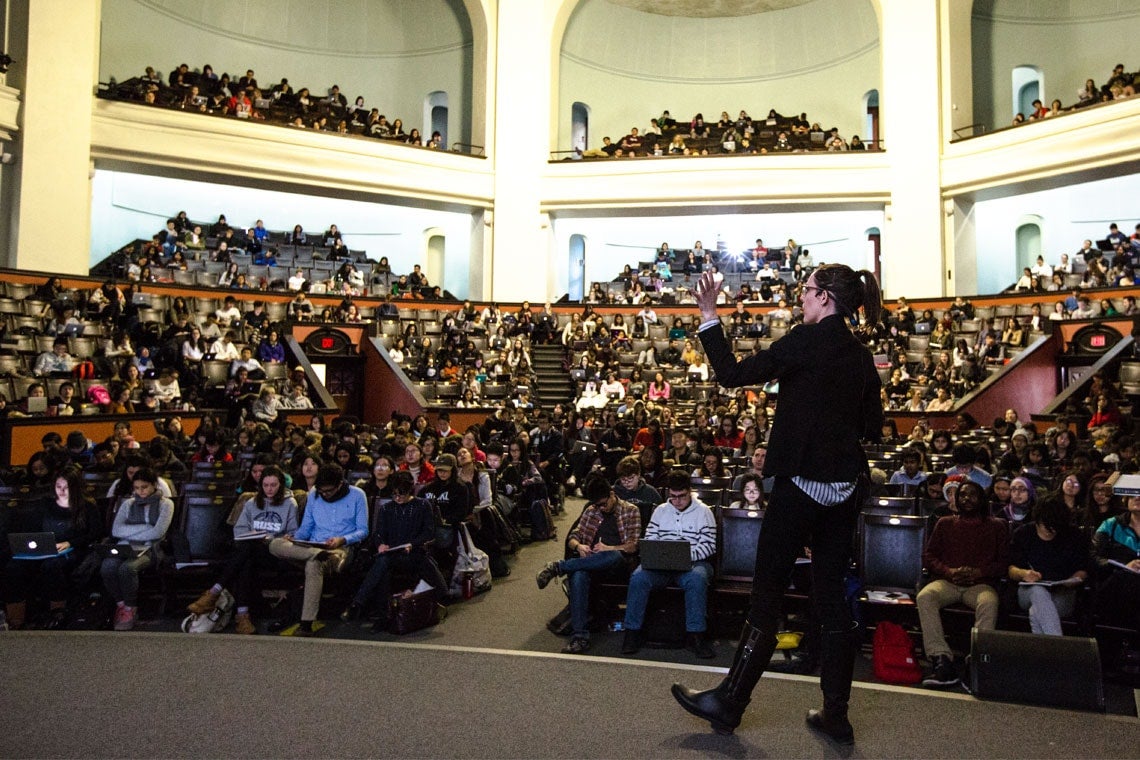