'Infinite hug' mechanism may be key to lung fibrosis: U of T research 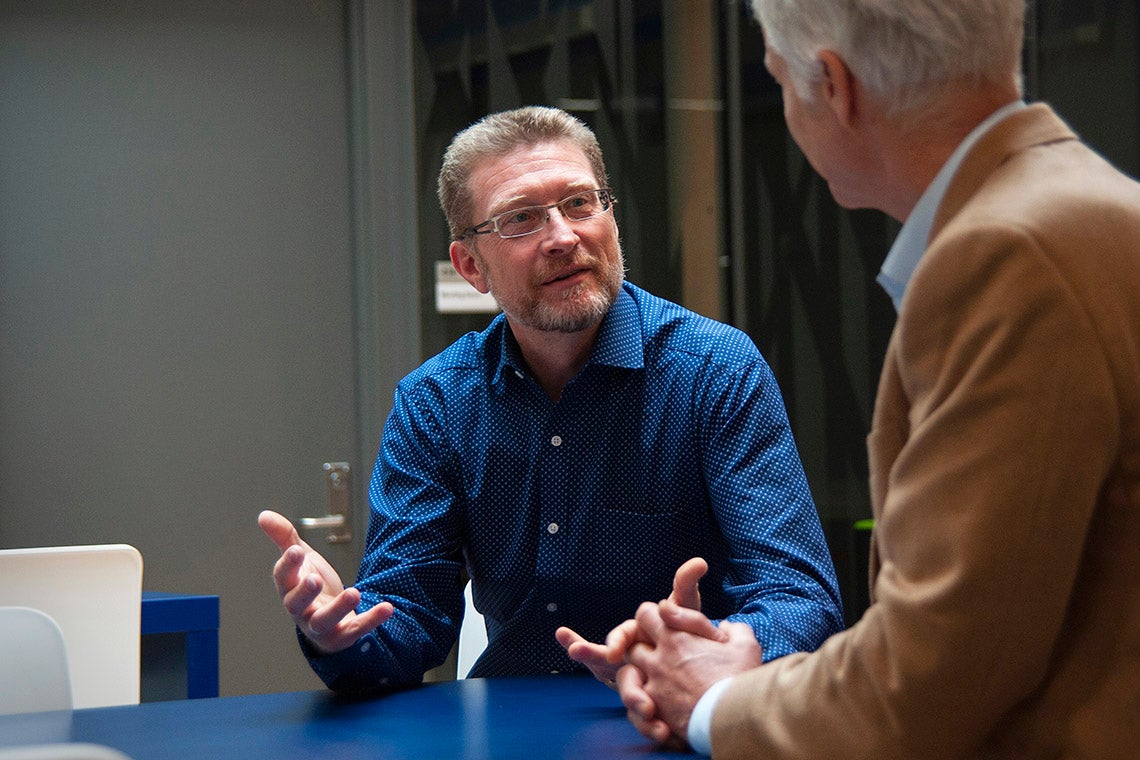 Boris Hinz, a distinguished professor at the Faculty of Dentistry, was the principal investigator of the study that identified the mechanisms underlying the development of fibrosis in the lungs

Researchers have long known that fibrosis – scarred tissue and organs – is caused by a wound healing mechanism that goes awry beyond normal wound repair. Now, a group of researchers at the University of Toronto’s Faculty of Dentistry has identified mechanisms underlying the development of fibrosis in the lungs – and it seems to originate with a cellular-level “hug” that just won’t end.
Fibrosis of the lung, or pulmonary fibrosis, is a deadly condition in which the tissues of the lungs thicken and harden, and eventually stop functioning. Survival rates are low: Without a lung transplant, most diagnosed with pulmonary fibrosis have a survival rate of three to five years.
A healthy body deals with damaged tissues by sending to the site of the wound macrophages – large white blood cells linked to the immune system. One role of the macrophage is to call forth a cell type called myofibroblast, cells that first fill in damaged tissues with tissue "glue" – collagen. When that work is done, these cells are supposed to die off, leaving room for healthy, second-generation fibroblasts to take over.
The U of T study suggests  that in wound repair models, macrophages link up with myofibroblasts, allowing the exchange of TGF–beta, a growth factor that helps the myofibroblasts build new tissue.
“We liken it to a handshake,” says Boris Hinz, a distinguished professor at the Faculty of Dentistry and principal investigator of the study. But they also identified a protein, cadherin-11, which binds the two cell types together in a tight “hug.”  The hug in turn facilitates the exchange of the growth factor.
In fibrotic models, cadherin-11 doesn’t end the bond between macrophages and myofibroblasts. And because the conversation between these two cell types continues long after it should, the myofibroblasts fail to deactivate, causing an infinite feedback loop, which leads to fibrotic scar tissue forming on the organ.
“The big question is: Why does it get out of control?” asks Hinz of the amplified healing response. “We can’t really say why it doesn’t turn off, but this might be a reason.”
While more questions still need to be answered, the study suggests new targets for therapeutics. By blocking cadherin-11, for instance, scientists might be able to turn off the feedback loop, allowing cells to resume their normal functioning.
The study comes as the result of the newly formed Fibrosis Network, a multi-disciplinary, multi-target, and multi-institutional research partnership that works to uncover the biological and mechanical processes that lead to fibrosis and discover novel therapies and drug targets for reversing the disease.
“It was great to work on this problem together with researchers and clinician scientists from the University of Toronto, McMaster University, and the University of Oulu in Finland, in addition to collaborations within our faculty,” says Monika Lodyga, research associate and lead author of the study.
The study was published this month as the cover story of the scientific journal, Science Signaling. This research was supported by the Canadian Institutes of Health Research (CIHR), the Collaborative Health Research Programme, the Canada Foundation for Innovation, the Ontario Research Fun and the E-Rare Joint Transnational Program's Development of Innovative Therapeutic Approaches for Rare Diseases.
Erin Vollick