Indigenous students at U of T honoured for efforts in language revitalization, health equity 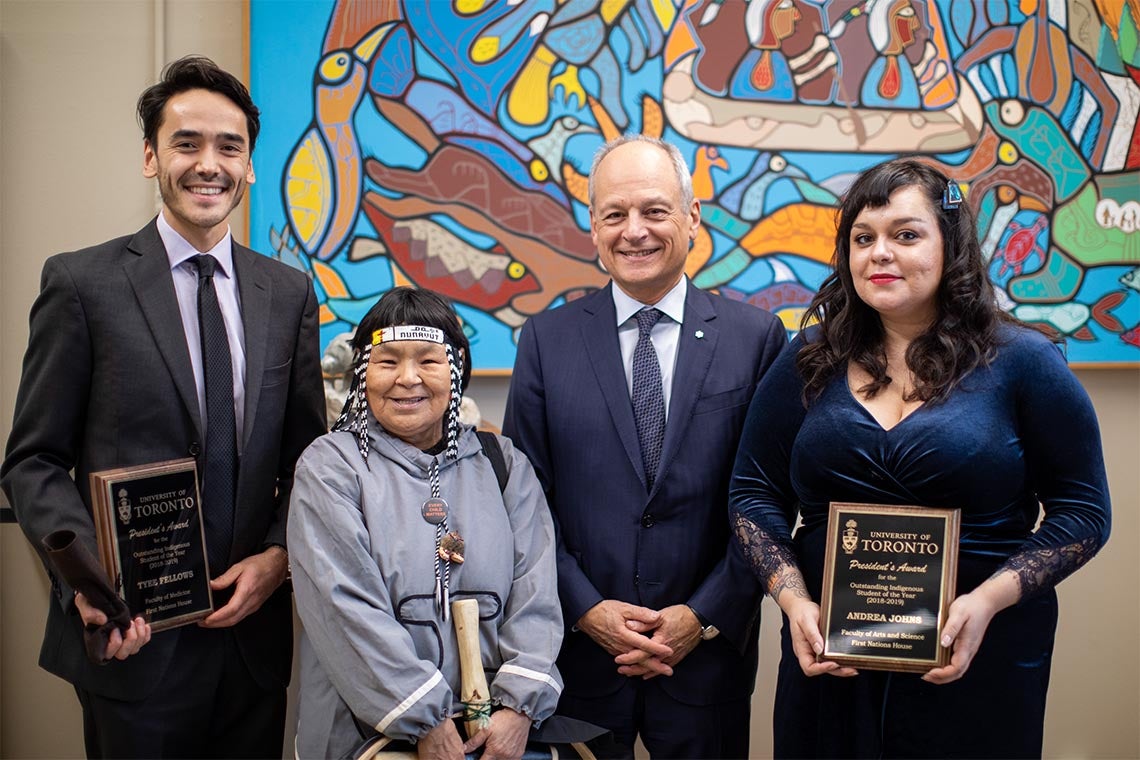 When Andrea Johns started at the University of Toronto as a mature student in 2015, she wasn’t sure she had what it takes to attain a degree.

Everything seemed overwhelming and inaccessible, she said, to “people like me who grew up in poverty, people with mental health issues, people with little to no support, people who are Indigenous.”

Today, Johns is a fourth-year undergraduate student specializing in Indigenous studies and double-minoring in book and media studies and creative expression and society. She is also one of two recipients of the President’s Award for the Outstanding Indigenous Student of the Year – a recognition of her tireless advocacy for Indigenous language revitalization.

The award recognizes Indigenous students whose accomplishments transcend coursework and grades, and who demonstrate a commitment to giving back to their communities.

For Tyee Fellows, the other recipient of this year’s award, the accolade recognizes his passion for helping others and for being on track to become one of Canada’s few Inuit physicians.

Fellows completed his bachelor’s and master’s degrees in biology and zoology at the University of British Columbia before coming to U of T to attend medical school. A fourth-year student, he plans to continue advocating for equity and equality for Indigenous and non-Indigenous peoples alike.

Fellows and Johns were presented their awards by U of T President Meric Gertler during a ceremony at First Nations House last week.

“Both of you have skilfully balanced academic success with community engagement, service and advocacy on Indigenous issues,” said President Gertler, noting the two are joining the ranks of Indigenous students who have brought “a generous spirit of community service” to U of T.

President Gertler said the passion and drive of Indigenous students like Johns and Fellows are invaluable as U of T builds on the recommendations of its Truth and Reconciliation Steering Committee, works towards decolonization and fosters collaboration with Indigenous communities on key initiatives such as new scholarships and the creation of programs like the Master in Social Work, Indigenous Trauma and Resiliency offered by the Factor-Inwentash Faculty of Social Work.

“Above all, we aim to support and foster a vibrant and robust Indigenous presence on our campuses,” President Gertler said. “And as we undertake these endeavours, I have to say that we draw inspiration from the remarkable leadership of the two individuals that we’re honouring today.”

Fellows, a proud Inuvialuk/Caucasian, traces his interest in medicine to the influence of his father, an emergency physician.

“Seeing his day-to-day life within the field of medicine, I was able to really grasp the fulfilment in helping others,” said Fellows, whose heritage spans across Canada, with ancestors hailing from Nova Scotia, the Northwest Territories and British Columbia.

Fellows said he’s drawn to emergency medicine due to the fact that it demands both hands-on care as well as swift critical thinking, and serves as the first point of contact with the health-care system for many patients.

"The emergency department is the interface between the community and hospital," he said. "Many first impressions of the health-care system are developed here, especially for minority communities like the Indigenous people, and providing care at this interface is where I believe I can make the greatest impact."

“The best thing I can provide to medicine is my pursuit towards understanding people’s fears and to provide security to them,” he said.

Fellows described the award as “deeply humbling” and emphasized his desire to advocate to both his communities that "health equity and equality will be realized between the Indigenous and non-Indigenous peoples when we both demonstrate, by example, accountability in our accomplishments and failures, as well as practise forgiveness in one another.

“With time, our relationship will be so strong that the difference in health between our two groups will be impossible because we’ll be one.”

In her acceptance speech, Johns, who is Kanien'kehá:ha/Mohawk, Turtle Clan with ancestral roots at Six Nations of the Grand River, said education wasn’t highly valued in her family.

The great-granddaughter of residential school survivors, Johns said her family was too preoccupied with making ends meet and putting food on the table to prioritize education – yet her parents “instilled a love of reading, storytelling and a hard work ethic that has been embedded in my core beliefs.”

That love of learning saw Johns eventually make her way to U of T through the Millie Rotman Shime Academic Bridging Program at Woodsworth College, which helps students qualify for undergraduate degrees offered by the Faculty of Arts & Science.

She became involved with First Nations House and the Centre for Indigenous Studies, which she describes as “a warm light that I’ve revolved around during my time here,” and found a community that helped her connect more strongly with her culture than was accessible to her growing up.

That included learning the Kanien'kéha/Mohawk language – which hadn’t been spoken in her family in two generations – from Assistant Professor Ryan DeCaire of the Centre for Indigenous Studies and department of linguistics.

Johns’s passion for Indigenous language revitalization also saw her set up U of T’s Indigenous Languages Club, which offers drop-in language lessons for Mohawk and Anishinaabemowin, and helps Indigenous students find opportunities to engage with their language.

Johns says the highlight of her time at U of T was her three-month research placement at Ngā Pae o te Māramatanga, New Zealand's Māori Centre of Research Excellence, which was supported by the Queen Elizabeth Diamond Jubilee Scholarship.

There, she completed a research project about Indigenous tattoo revitalization and its connection to cultural preservation. She says the work, the people she met and the places she explored made for “a life-changing experience.”

Going forward, Johns aims to attain fluency in the Mohawk language and contribute to the revitalization of Indigenous languages.

“I hope that one day I’ll be in a position to help other Indigenous students achieve their dreams, as I have mine,” she said. “There is still so much work that needs to be done at this institution and in this society to ensure that the next generation of Indigenous scholars can stand where I’m standing.

“I know that they, too, can reach for the stars, and then some.”