‘Inadequate and unsafe’: U of T report highlights need for better walking and cycling network in Scarborough 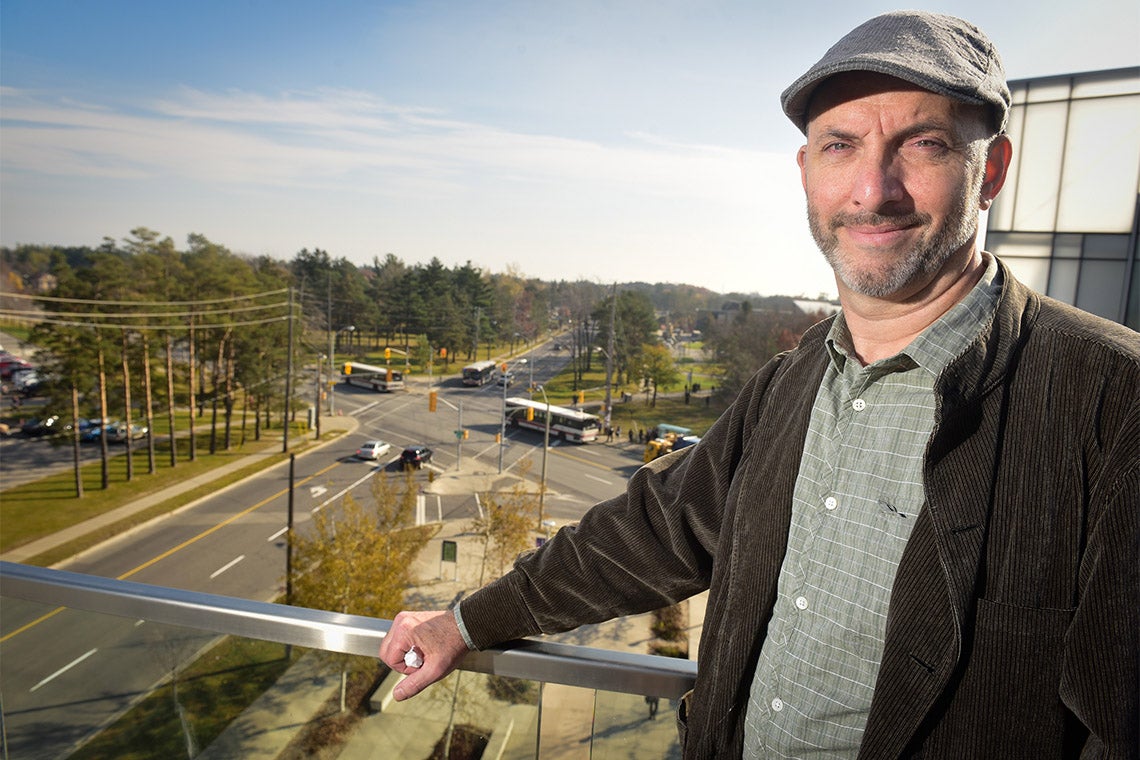 André Sorensen, a professor in U of T Scarborough's department of human geography, says new infrastructure is badly needed to encourage cycling, walking and other forms of active transportation in Scarborough (photo by Ken Jones)

Cycling and pedestrian infrastructure in Scarborough is “inadequate and unsafe,” University of Toronto researchers say in a new report offering suggestions to support alternatives to driving.

André Sorensen, a professor in U of T Scarborough's department of human geography, and his co-authors say Scarborough continues to suffer from mid-century urban planning that prioritizes driving over “active transportation,” including walking, cycling, inline skating and mobility aids such as motorized wheelchairs.

“The city has failed to develop a coherent, long-term plan for Scarborough that will meet its own policy goals for sustainability and inclusion,” he says. “As a result, it continues to be dangerous and unpleasant for residents who are walking and cycling in this part of the city.”

Scarborough has the highest per capita rate of fatalities from traffic collisions in Toronto at 3.04 per 100,000 people, the report says. Sorensen says Scarborough's large arterial roads, busy intersections, lack of cycling infrastructure and unsafe crosswalks help explain the alarming rate of traffic fatalities.

Postwar urban planning was based on an assumption that people would get around by car. Yet only 40 per cent of Scarborough households have access to a car, the researchers say. Meanwhile,  walking and cycling have grown in importance due to cost and the proven environmental, physical and mental health benefits.

Sorensen says it is feasible to develop active transportation networks in Scarborough. “There’s so much opportunity in Scarborough, mostly because of the wide arterial roads and existing urban form,” he says.

For one, its main arterial roads – including Kingston Road and Eglinton, Lawrence, Sheppard and Finch Avenues – are wide enough to build walking and cycling infrastructure without removing a traffic lane.

Scarborough also has higher residential density compared to other suburbs – not to mention more high-density employment and commercial areas. Finally, it has potential for an extensive off-road cycling and walking trail network.

“There’s so much wasted space – the city grows grass on three-to-four metres on either side of these roads,” Sorensen says. “Unlike downtown, where there’s less space and you have to remove a traffic or parking lane to build cycling or walking infrastructure, that is much easier in Scarborough.”

The report proposes an active transportation network for Scarborough that ensures all residences are within one kilometre of a designated cycling route and that meets other policy targets set out by the city in its sustainability and Vision Zero road safety plans.

The author’s say an interim network is needed to bridge the wide gap between existing infrastructure and the city's goals. It would expand existing cycling routes to around 150 km (six times larger than it is now), mostly along major roads such as Kingston, Eglinton, Ellesmere, Finch, Kennedy and Morningside.

The authors say a key element to creating any cycling and pedestrian network in Scarborough is connectivity. The authors suggest greatly expanding and improving off-road cycling and walking trails while improving connections to the on-road network to get people where they need to go.

These routes will need to run along the major arterial roads that are connected in a grid and already cross major obstacles such as ravines, railways and highways.

“These roads are the most direct route to get people to school, work, appointments, places to eat and shop or public transit stops,” Sorensen says.

“If we want an active transportation network that people can actually use, it has to go along these busy roads.”

The report also identifies an urgent need to improve walking networks in Scarborough. Sorensen says the network needs to prioritize safety and accessibility by creating an inviting and pleasant environment for pedestrians. These improvements include creating safer crosswalks and intersections, as well as wider sidewalks (2.1 metres minimum), more benches and better winter maintenance.

Nadhiena Shankar, a public policy and urban planning student and co-author of the report, says that active transportation infrastructure is needed to ensure transit equity in Scarborough.

“This proposal isn’t unreasonable. It aligns with the city’s existing policies on safety, climate change and accessibility,” says Shankar, who was born and raised in Scarborough.

“We hope this puts the city on notice that we deserve better. It’s also a reminder that Scarborough is for everyone, whether you ride a bike, walk, drive or take public transit – no one should be sidelined.”

The authors received financial and logistical support from the U of T Scarborough Suburban Mobilities Cluster.