By improving catalogues and collections, U of T librarians aim to be respectful of Indigenous voices 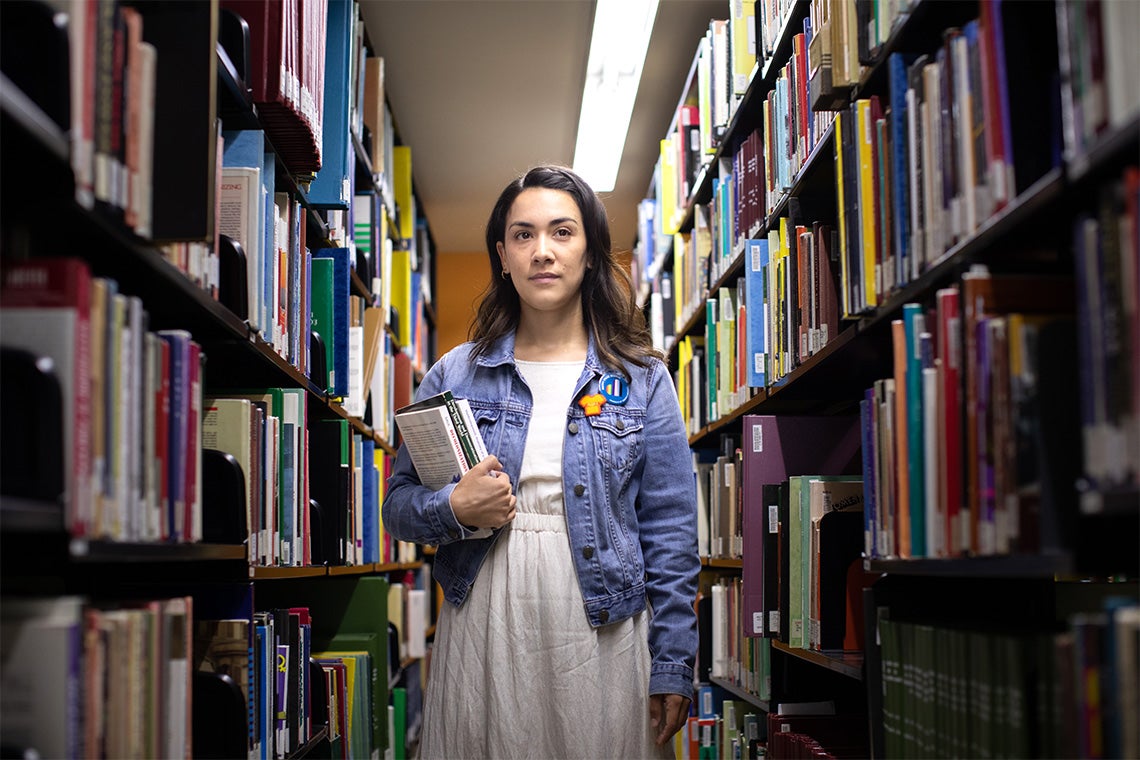 Mikayla Redden, a librarian at New College, is part of a tri-campus movement within U of T Libraries to change language and practices used by libraries and archives worldwide to describe items related to Indigenous Peoples (photo by Johnny Guatto)

When Mikayla Redden was studying the library and information sciences in university, she was often shocked when she saw how Indigenous materials were catalogued.

In a standard system used by many academic libraries, many novels, plays and other works by Indigenous authors fall under the heading: “History.”

“That makes me feel completely invalidated,” says Redden, who is of Anishinaabe and Scottish heritage. “That makes the experiences of my Indigenous friends, who are creators, writers, playwrights [invalidated].

“These things are very much here and now – alive – but they are being classified as ‘history.’”

Now an information services and instruction librarian at the University of Toronto’s New College, Redden is part of a tri-campus movement within U of T Libraries, as well as internationally, to change harmful language and practices that are still used in libraries and archives worldwide to describe items related to Indigenous Peoples and other marginalized communities.

At U of T, the efforts extend to the realm of metadata, where librarians and staff have changed subject headings used to find and organize books in the catalogue. In recent weeks, U of T Libraries replaced hurtful and outdated headings, such as “Indians of North America,” and the racial slur, “Eskimo,” with more appropriate language that’s used in common speech.

Jordan Pedersen, a metadata librarian at U of T, says that U of T Libraries has removed 10 offensive terms from its catalogue so far, but notes that further changes will be needed.

“In libraries, we make our records so people can find stuff. We adhere to international standards, and one of them is the U.S. Library of Congress – which is where these terms are coming from,” she says. “[But] in order to be respectful, we have to break some of those standards.”

A group of librarians, staff and students has been working for over a year to change the subject headings and other metadata. An internal library survey showed that librarians and staff who interact with patrons were made to feel embarrassed and uncomfortable by the old terminology, Pedersen says.

“There are a lot of messy feelings around how to explain this to users,” she says.

The outdated system also threatens to impact research. That’s because some library users may not be able to find resources if they are organized using language that is no longer commonly used in Canada.

That’s why the U of T working group plans to look at ways it can further improve the catalogue, including by adding more specific descriptions like “Mississaugas of the Credit River.”

In making these changes, U of T librarians and staff took inspirations from American libraries that altered the way they catalogue items related to undocumented migrants, Pedersen explains.

Now, U of T Libraries is prepared to share information with other libraries looking to follow suit.

“I hope this will be helpful to other people as well,” Pedersen says.

At U of T’s Thomas Fisher Rare Book Library, a parallel effort is underway to reorganize and showcase works by Indigenous authors, from the mid-19th century memoirs of an Ojibwe chief to an Inuktitut textbook on hunting from the 1970s. 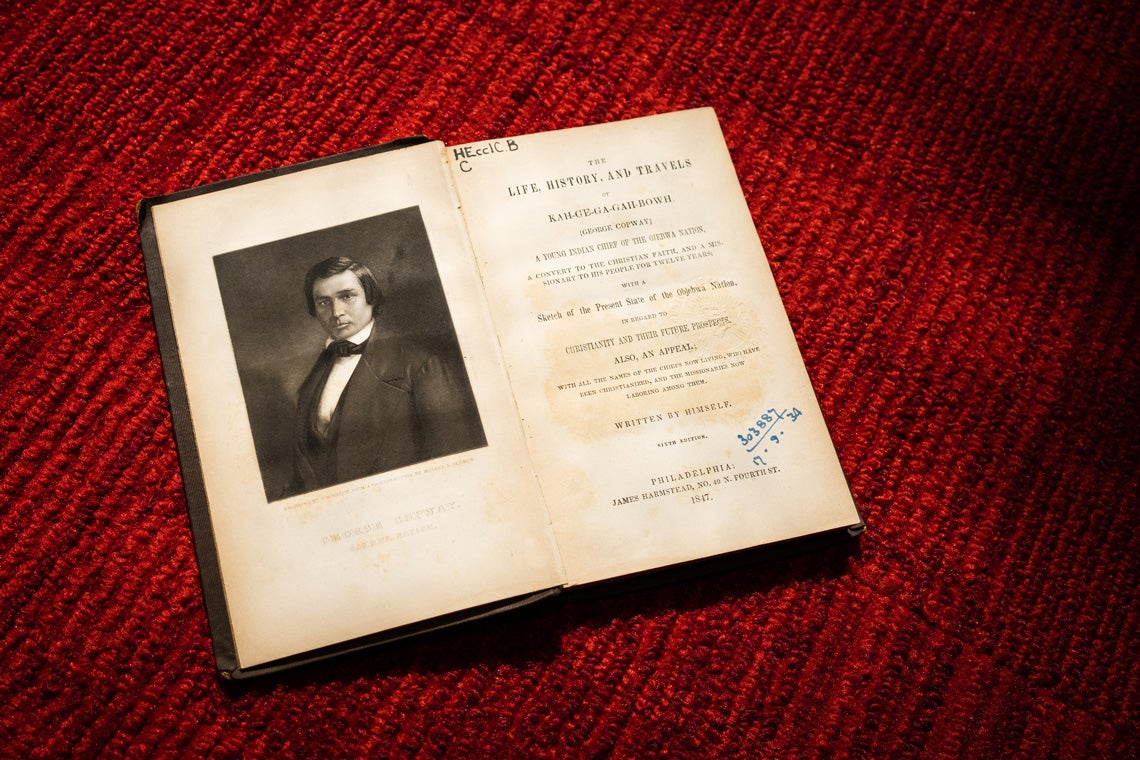 The Life, History and Travels of Kah-ge-ga-gah-bowh (George Copway): a young Indian chief of the Ojebwa nation, memoirs from 1847, will be on display at Fisher library on June 21 (photo by Geoffrey Vendeville)

Danielle Van Wagner, a special collections librarian, is aiming to improve the descriptions of Indigenous materials that are both derogatory and overly broad – for example, three boxes that simply read: “Collection of miscellaneous material on Canadian Indians and Eskimos.”

For National Indigenous Peoples Day on June 21, Van Wagner is organizing an exhibition at Fisher library of important works in the library’s collection, including a signed and annotated draft of Tomson Highway’s 1989 play, Dry Lips Oughta Move to Kapuskasing.

“This is the ‘5th’ draft, not by any means the final, it’s a terrible draft & I hope you don’t take it too seriously,” says a self-deprecating note signed by the author on the cover page. 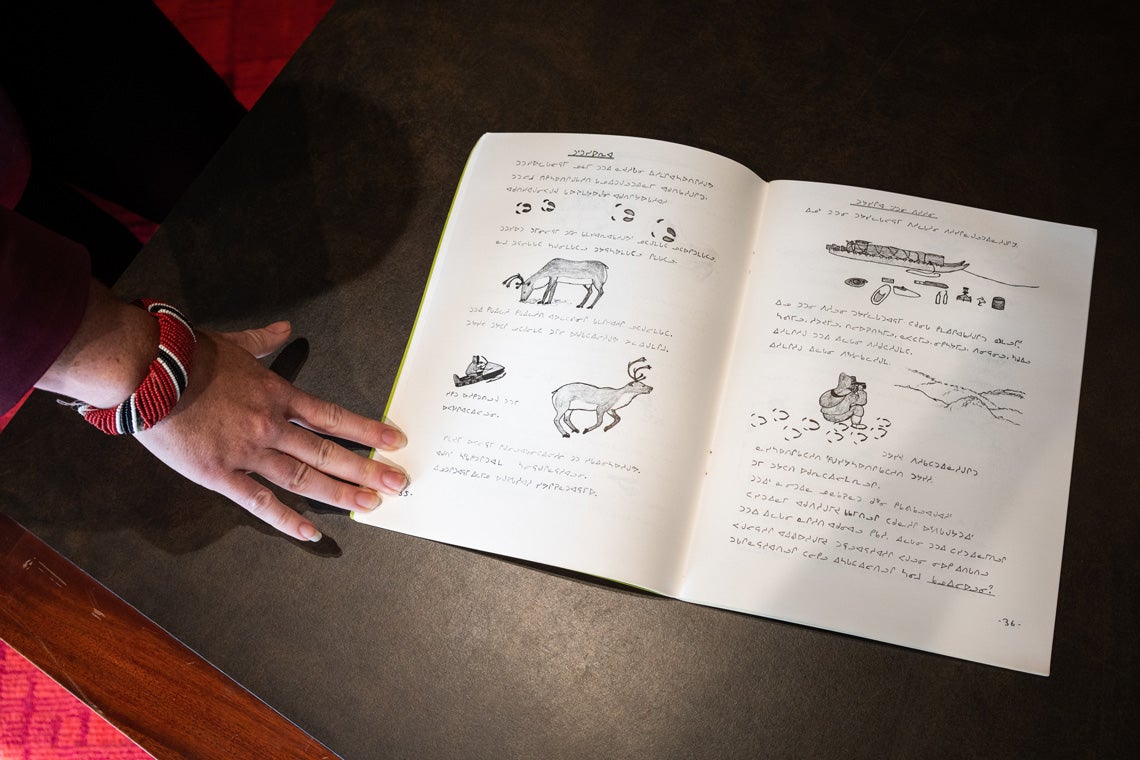 Personal papers, issues of Indigenous newspapers will also be on display at Fisher.

Because Indigenous materials aren’t always labeled using respectful and familiar language, they are often hard to find in the stacks, Van Wagner says.

“Part of what’s being lost is, number one, the voices you see in this room [at Fisher], but also the teaching and education possibilities that exist here.”

“It maybe tells Indigenous students that this [the library] isn’t a home for them, that this isn’t a place where their stories live – but, in fact, it is. But that’s something we need to work harder on, to make this a more welcoming and inviting space.”

Redden, the information services and instruction librarian, is leading a tri-campus working group that is in the early stages of adding to the libraries’ collection in order to improve the representation of under-represented and racialized authors.

Over the longer term, her “dream project” is to ensure all contemporary Indigenous materials in U of T Libraries’ vast collection aren’t mischaracterized as “history.”