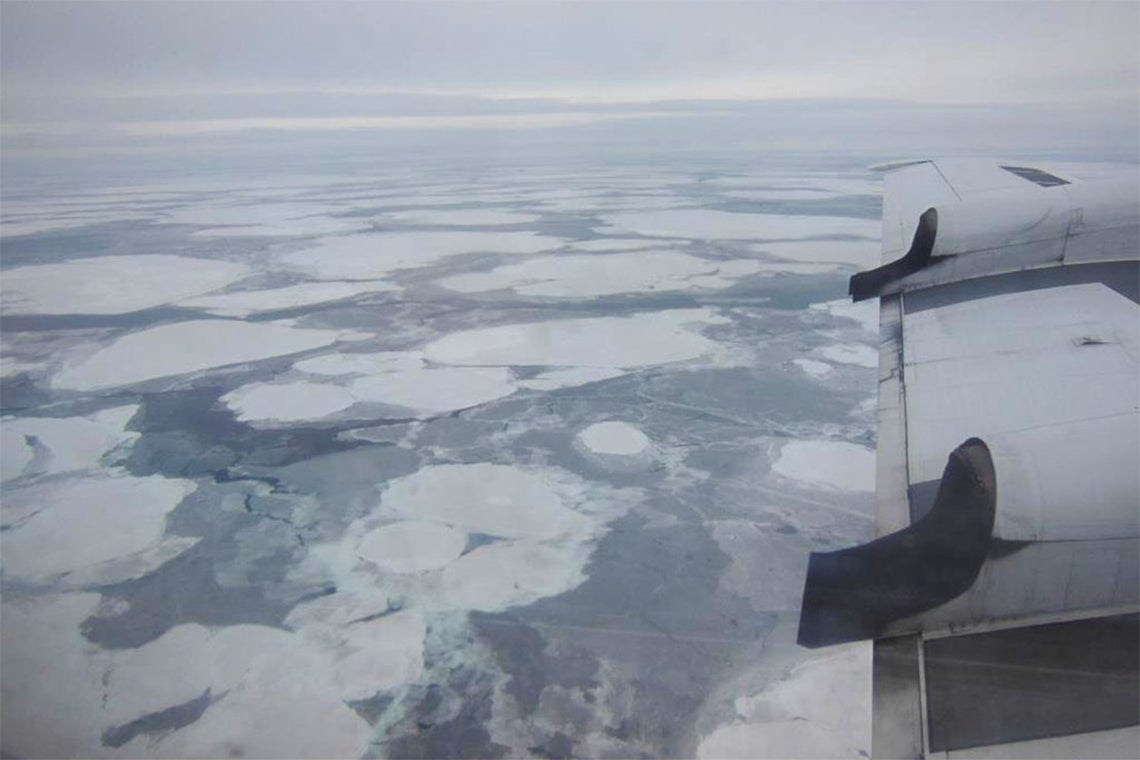 Snugged up against the upper edges of the Canadian Arctic Archipelago and Greenland lies the oldest and thickest sea ice in the world, covering hundreds of thousands of square kilometres of ocean. Arctic sea ice grows and shrinks with the seasons, but this ice has so far lasted even through the warmest summers on record.

Scientists call this region “The Last Ice Area.” They say it could endure even after the rest of the Arctic becomes ice-free in the warmer months, providing a vital refuge for polar bears, walruses and other species that rely on sea ice to survive.

But recent research at the University of Toronto Mississauga suggests the Last Ice Area may be in more peril than previously thought. In a recent paper published in the journal Nature Communications, Professor Kent Moore and his co-authors describe how this multi-year ice is at risk not just of melting in place, but of floating southward into warmer regions. This, in turn, would create an “ice deficit” and hasten the disappearance of the Last Ice Area.

“This very old ice is what we’re concerned about,” says Moore, who is in U of T Mississauga’s department of chemical and physical sciences. “The hope is that this area will persist into the middle part of this century or even longer. And then, hopefully, we'll eventually be able to cool the planet down. The ice will start growing again, and then this area can act as a sort of seed,” 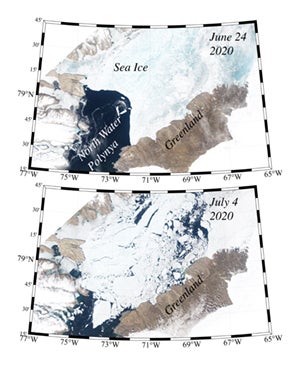 Using satellite data, Moore has been studying ice arches that form along Nares Strait, a 40-kilometre-wide, 600-kilometre-long channel that runs between Greenland and Ellesmere Island from the Arctic Ocean into Baffin Bay.

Moore had already observed warning trends in earlier research that indicated this ice is increasingly on the move.

“The Last Ice Area is losing ice mass at twice the rate of the entire Arctic,” Moore says. “We realized this area may not be as stable as people think.”

His most recent analysis of satellite data says the problem may be getting even worse. The arches along Nares Strait that historically have held the Last ice Area in place have become less stable, according the study.

“The ice arches that usually develop at the northern and southern ends of Nares Strait play an important role in modulating the export of Arctic Ocean multi-year sea ice,” he and his authors write.

“The duration of arch formation has decreased over the past 20 years, while the mass of ice exported through Nares Strait has increased.”

The ice arches form as the weather cools. Multiple ice floes converge as they funnel into the relatively narrow strait, forming huge structures that look like bridge supports turned on their sides. The arches span the full width of the passage, blocking the movement of multi-year ice from north to south.

“It's really quite profound to imagine a 100-kilometre-long barrier of ice that remains stationary for months at a time. That's more than twice as long as Louisiana’s Lake Pontchartrain Causeway – the world’s longest continuous bridge over water,” Moore says. “It speaks to the strength of ice.”

But that strength is diminishing. Ice arches only form for part of the year. When they break up in the spring, ice moves more freely down the Nares Strait. And that breakup is happening sooner than in the past.

“Every year, the reduction in duration is about one week,” Moore says. “They used to persist for about 200 days and now they’re persisting for about 150 days. There’s quite a remarkable reduction.

“We think that it’s related to the fact the ice is just thinner and thinner ice is less stable.”

The impact of losing the Last Ice Area would extend far beyond photogenic species like polar bears. Ice algae flourishes below the ice and in brine channels that run through its cracks and fissures, supplying carbon, oxygen and nutrients that underpin an elaborate but vulnerable ecosystem.

In 2019, the Canadian government designated a section of the Last Ice Area as the Tuvaijuittuq Marine Protected Area. Tuvaijuittuq is Inuktut for “the place where the ice never melts.”

Moore remains hopeful that his analysis of the Nares Strait ice arches will focus more attention on this important region of the Arctic. However, he says action targeted specifically at preserving the arches won’t be sufficient to solve the problem. A global solution is needed.

“The scale is so huge and the region is so remote,” he says. “The only thing we can do is cool the planet down. Then the arches will hopefully naturally form again.”

Inset: Images of the ice arch that formed at the southern end of Nares Strait in 2020. The upper image shows the arch holding back the ice while the lower image shows the ice streaming southwards after the arch collapses (Sentinel-2 satellite imagery courtesy of the European Space Agency)