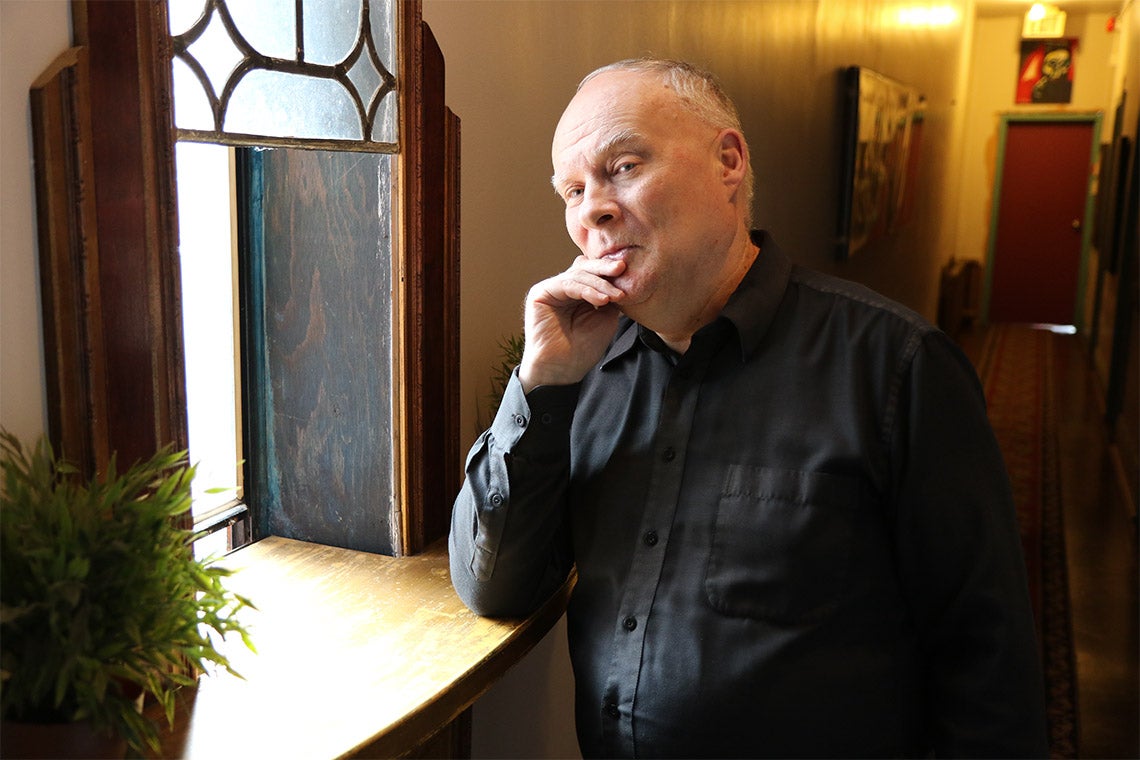 Andrew James Paterson, a University of Toronto alumnus and Innis College graduate, was named one of eight recipients of the 2019 Governor General’s Awards in Visual and Media Arts (photo by Perry King)

The artwork of Andrew James Paterson, a University of Toronto alumnus and interdisciplinary artist with a portfolio spanning nearly 40 years, is currently on display in the National Gallery of Canada after Paterson was named one of eight recipients of the 2019 Governor General’s Awards in Visual and Media Arts earlier this year.

A graduate of Innis College, Paterson’s videos, films and performances have appeared in Berlin, Seoul, Buenos Aires, Montréal and Toronto, among other places. He is an active programmer and curator for independent media and visual art exhibitions, including Cinematheque Ontario and Toronto’s Images Festival.

Speaking from his home, nestled above the Cameron House music hall in downtown Toronto, Paterson said he was humbled by the honour and in awe of his fellow award winners, which include Indigenous art curator Lee-Ann Martin and environmental artist Marlene Creates.

“It’s slightly unbelievable because, in some ways, [I think] ‘Me? Among that company?’” says Paterson, who sees some of his art as “conceptual one-liners” that take a critical eye to issues like language, technology, the human body, politics and capitalism.

The Governor General’s Awards in Visual and Media Arts were created in 1999 by the Canada Council for the Arts and the Governor General of Canada. Paterson’s award – in the Lifetime Artistic Achievement Award category – recognizes a body of work and its contribution to visual arts, the media arts and contemporary practices in the field.

The winners are selected by a peer committee and receive a $25,000 prize. Governor General Julie Payette presented the 2019 award recipients with a bronze medallion during a March 28 ceremony at Rideau Hall in Ottawa. Paterson began his career as a musician – he was the main vocalist and writer for the post-punk band The Government between 1977 and 1982. His passion for music and art was deeply influenced by his parents. His father, G. R. Paterson, was a U of T professor emeritus in pharmaceutical chemistry and a big fan of classical music. His mother, Ida Paterson, was a painter.

But Paterson wanted to evolve, to be more “than just a career musician,” he says.

Paterson found the experience of attending U of T in the 1970s to be “stimulating.” Between courses in English and film studies, and time spent at the Helen Gardiner Phelan Playhouse and Hart House Theatre, Paterson was able to explore his different interests – a practice that he continued throughout his career.

He also got involved with VideoCabaret, a Toronto-based mixed-media company that integrates music and video. “There was all this video around, so I started going, ‘What could I do with the medium?’” Paterson recalls.

Paterson went on to produce small animation projects and performance-based pieces. He has published numerous books – including fiction and art commentary – and edited or co-edited numerous essays and anthologies. In 2018, he published a novelette, Not Joy Division, a fictional mystery that incorporates social media elements.

To this day, Paterson refuses to limit his artistic reach, choosing instead to maintain a relationship to defined art “communities,” he says. “One thing that runs through my work is this ‘meta’ in relation to art worlds, or so-called ‘art communities.’ I try to avoid using the definite article with the word ‘community’ as much as possible.