‘I can proudly say I’m a U of T graduate’: How Alex Harold defied the odds to earn his degree 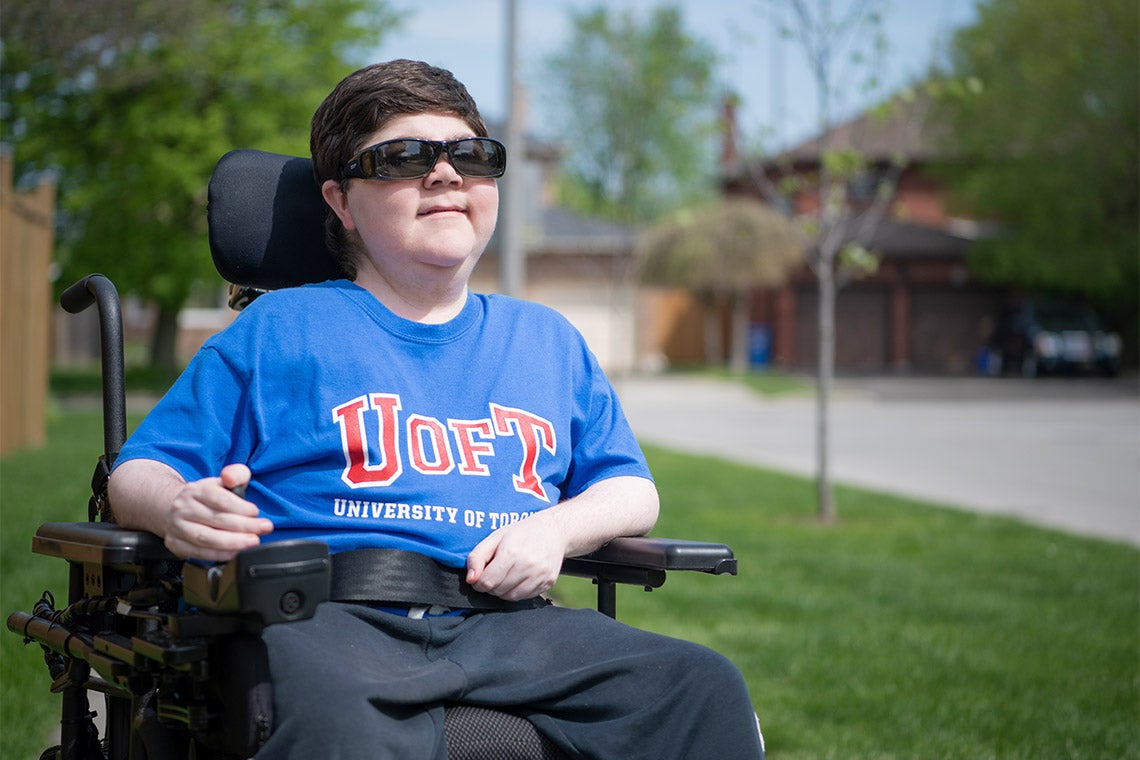 Diagnosed with Duchenne muscular dystrophy when he was four, Alex Harold has already lived seven years longer than doctors expected – and is now graduating from U of T with a degree in management (photo by Don Campbell)

Alex Harold was diagnosed with Duchenne muscular dystrophy when he was four. His parents were told by doctors he would be fortunate to see his 20th birthday.

Now, at 27, he can say he’s a University of Toronto graduate, having completed the highly competitive management co-op program at U of T Scarborough.

“It hasn’t really sunk in quite yet, but it’s so satisfying to know that after nine years I’ve earned my degree,” says Harold, who plans to watch his virtual convocation at home with his parents.

Duchenne is a neuromuscular disorder, one of many different forms of muscular dystrophy characterized by progressive muscle degeneration, according to Muscular Dystrophy Canada.

“The fact it’s a progressive disorder can be tough because what I can do today isn’t necessarily something I will be able to do tomorrow,” says Harold, who grew up in Pickering and attended St. Mary Catholic Secondary School.

“I may be able to brush my teeth one day, but all of a sudden it will get harder to do – and then in a few weeks or a month, I won’t be able to do it at all. That can be demoralizing. But I always take things one day at a time. And for all the challenges, I like to think I have a pretty good life.”

Harold, who started taking three credits per semester in 2011 but switched to part-time in 2017, credits the support he received from staff and faculty in the department of management and AccessAbility Services at U of T Scarborough. Most importantly, he credits the support of his parents, Janice and Tony.

“I rely on my parents for a lot – drives to campus, bringing me to class, even helping to type an assignment when my fatigue levels are high. Without their support and encouragement, I don’t think I would have been able to make it,” he says.

Harold says his highlights as an undergrad include earning a 100 per cent in a third-year statistics course, his classes with Associate Professor Syed Ahmed and Associate Professor Lisa Harvey – both teaching stream – from the management department, and his co-op work placements.

“Alex is one of the most dedicated, hard-working, well-rounded students I’ve had the pleasure of teaching,” says Harvey, who taught Harold third- and fourth-year auditing courses.

“He always came to class prepared, was eager to participate and even caught a few errors in the coursework that I was able to correct.”

Harold also spent four months on a co-op work term with Ontario’s Ministry of Finance, who were so impressed by his work they offered Harold a second four-month placement, which he finished in 2016.

“The co-op program is much stronger having had Alex as a student,” says Christine Arsenault, managing director of the management program at U of T Scarborough.

Despite his daily physical challenges, Harold says he refuses to be defined by his diagnosis. When he wasn’t studying for school, he was an active volunteer and advocate for people dealing with their own accessibility challenges.

Since he started taking part in the Durham Region Walk for Muscular Dystrophy in 2008, Team Alex, which includes friends and family, has raised close to $200,000, with Harold personally raising more than half of his team’s total. The funds support research into treatments as well as services and equipment for people living with muscular dystrophy. Harold is also a spokesperson for Muscular Dystrophy Canada, and a volunteer organizer for the Pickering Terry Fox Run.

Among the many awards he’s received for his volunteer and advocacy work include a Queen's Diamond Jubilee Medal in 2012 (he is one of the youngest Canadians to receive the award) and, more recently, a City of Pickering Civic Award.

Harold plans to dive back into volunteer and charity work, especially with Muscular Dystrophy Canada. He’s been excited to hear about recent drug treatments and therapies that have in part been aided by money raised by himself and others.

“I know I may be too old for some of the treatments to make a huge impact on my life, but I’m also inspired and motivated knowing that down the road it may help a three- or four-year-old child who has just been diagnosed to have a better life,” he says.

If Harold has one piece of advice to fellow students, it’s that no matter what obstacles you face, try to stay positive and not lose hope.

“If you get down on yourself or feel like you want to give up, it’s OK, it happens to all of us at some point. If you can build a support network and find people you can talk to about the things you are struggling with, that can really make all the difference,” he says.

“I can now proudly say I’m a U of T graduate, which sounds really cool when you say it out loud.”