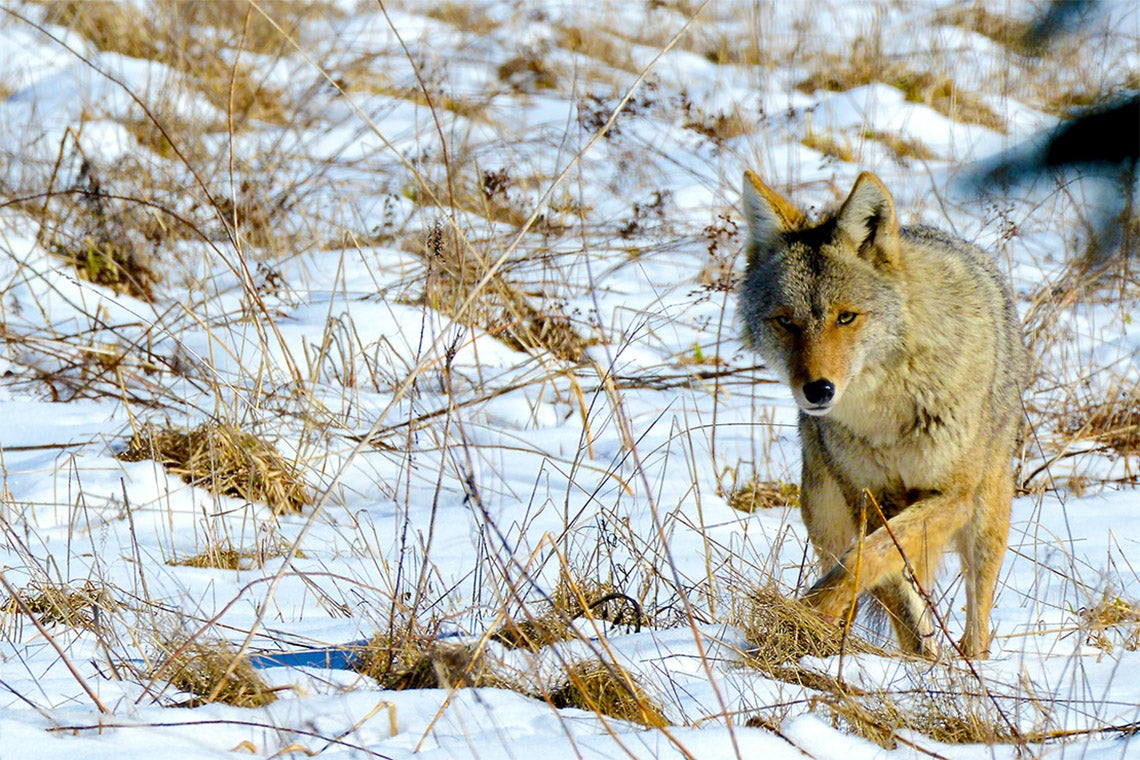 An eastern coyote – a hybrid of coyote, wolf and dog – is seen on the prowl in Kawartha Lakes, Ont. (photo by Alan Emery via Unsplash)

For decades, this was the basic logic used to define a biological species: a population of animals that can successfully reproduce. But that definition is shifting. There are hybrid animals that produce fertile offspring and grow into larger populations, but are not necessarily their own species.

Coyote/wolf hybrids are among them. These canine hybrids live across a large swath of northeastern North America, and they have DNA from coyotes, wolves and even domestic dogs.  Media coverage has sometimes sensationalized the risk associated with “coywolves” in urban and suburban neighbourhoods, but these animals are not new. Coyote/wolf hybrids were first identified in the early 20th century, and they can successfully reproduce over generations.

So why would they be considered a canine hybrid and not a separate species?

“There is not one ‘coywolf,’ there are various pockets of hybrids of coyotes and wolves in different parts of the continent,” explains Lauren Schroeder, an assistant professor of paleoanthropology at the University of Toronto Mississauga.

In an article published in the Journal of Morphology, students and collaborators of the Schroeder Lab identified several traits in coyote/wolf hybrids that are also found in other mammal hybrids. The research team on the project included recent U of T Mississauga master’s of anthropology graduate Natasa Zdjelar, current PhD students Lavania Nagendran and Christopher Kendall, and Rebecca Rogers Ackermann of the University of Cape Town in South Africa.

They examined more than 400 eastern coyote skulls held in the collection of the State Museum of New York in Albany. Many of these animals had extra teeth and dental crowding. They also had significant anomalies in the sutures of their skull – the shallow grooves in the cranial bones that are flexible at a mammal’s time of birth to facilitate delivery, but fuse as it matures.

“These traits are caused mostly by the mismatch in size between the two species – a wolf is a lot larger than a coyote,” says Schroeder.

But factors such as genetic mutations could also cause some traits observed in hybrid animals, and Schroeder’s research program is part of a wider effort to identify the signatures of hybrid animals across different species.

“We wanted to know whether the eastern coyote exhibits similar anomalies that are found in other mammalian hybrids, such as baboons, wildebeests, and mice,” says Schroeder.

“Hybridization happened in humans as well, but we do not really know the extent to which it happened in the very distant past, or if it was something that only occurred more recently,” says Schroeder.

“With coyotes and wolves, you have multiple species that are reproducing and producing viable offspring. They are succeeding in North America. In the human model, you also have multiple species on the landscape. Different groups of hominins, like Neanderthals, humans and Denisovans did reproduce, hybridize and were successful,” she says. “It is a more complex concept of what makes a biological species. Different populations reproducing together, and producing hybrid offspring. Some are viable and succeed, while others do not.”