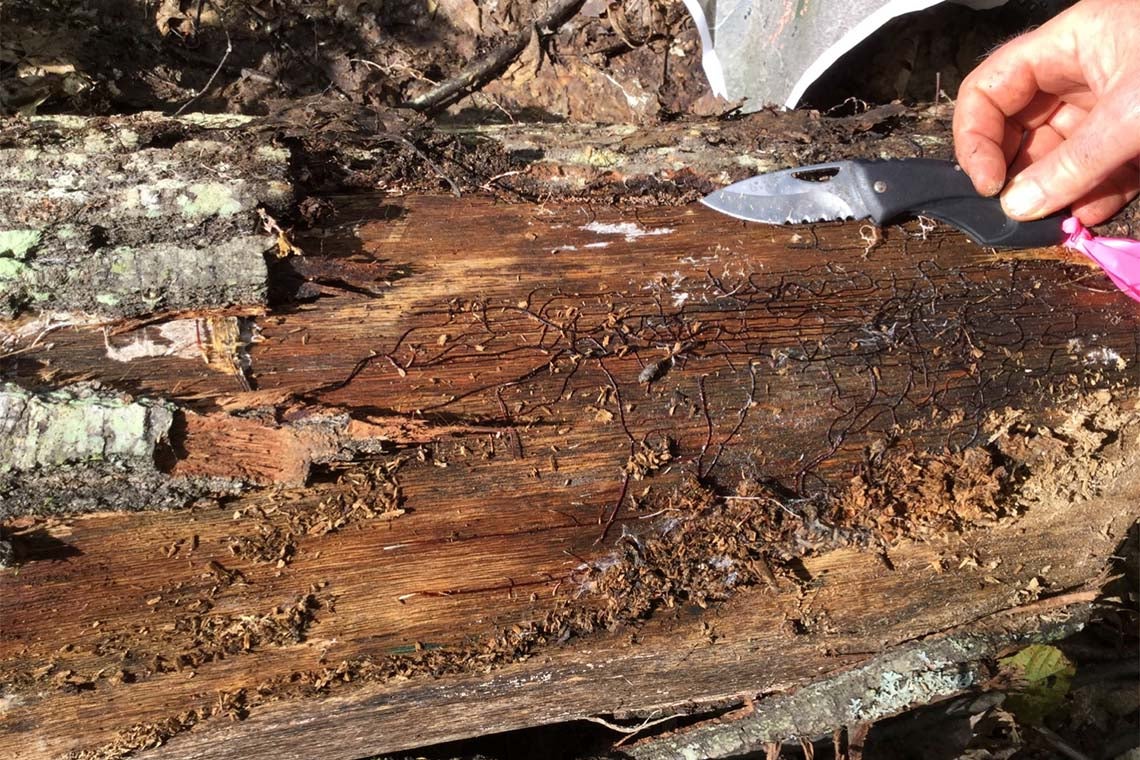 The Armillaria gallica fungus, which is growing in a forest on Michigan's Upper Peninsula, is at least 2,500 years old, weighs 400,000 kilograms and covers about 70 hectares (photos courtesy of James B. Anderson)

A giant individual of the fungus, Armillaria gallica, or honey mushroom, first studied 25 years ago by James B. Anderson, a professor emeritus of biology at the University of Toronto Mississauga, is not only alive and well but is older and larger than Anderson originally estimated.

“I assumed it would still be there nearly three decades on and realized it would be a great opportunity to study the dynamics of naturally occurring mutations in a cell population that is spatially organized,” he says.

In 1992, Anderson and his colleagues estimated that the honey mushroom, which is growing in a forest on Michigan’s Upper Peninsula, was 1,500 years old, weighed 100,000 kilograms and covered 15 hectares. Using current research and analytic techniques, Anderson took additional samples in between 2015 and 2017 and can say with confidence that the mushroom is at least 2,500 years old, weighs 400,000 kilograms and covers about 70 hectares.

“I view these estimates as the lower bound,” Anderson says. “The fungus could actually be much older. However, we think we have circumscribed its entire dimensions, which wasn’t the case in 1992.” Although A. gallica, like most fungi, produces mushrooms above ground, it also has a network of underground tendrils called the mycelium that keeps the fungus alive by searching for food sources. The mycelium feeds on soil or decaying plant matter. A. gallica’s tendrils are organized into organs called rhizomorphs and, unlike other fungi, its rhizomorphs also seek out live wood as a source of nourishment. Armillaria can infect a live tree until it dies and then continues feeding on it afterward.

“It has a large role in decaying wood and in causing root disease,” Anderson says.

Given major advances in genetic research techniques, Anderson was especially eager to sample the fungus and compare it to a reference genome to see whether variation had occurred over time and discern the extent of that variation. To do so, he needed a search strategy, and he turned to a former student-turned-professor, Myron L. Smith of Carleton University, and two other colleagues at Carleton, for the computational analysis.

Anderson, Smith and Professor Johann Bruhn from the University of Missouri-Columbia collected 245 samples during four visits to the site of the fungus over three years, “each of which led to many months of work in the lab,” Anderson says.

He found that the mutation rate was very low and that even frequently occurring mutations “didn’t have much of an impact on the fitness of the organism or on its appearance. What we think that tells us is that there must be some mechanism by which the fungus protects itself from mutations.”

The researchers suspect that the fungi may localize mutations in areas where they couldn’t cause much damage. “In Armillaria, this would mean that cells in the rhizomorph tip would retain the old DNA, whereas the subtending cells (committed to local, dead-end development) would receive the new DNA. In this way, the rhizomorph tips perpetuating the lineage would retain fewer mutations than cells committed to local differentiation,” the researchers write in their article, published online in a preprint by bioRxiv.

Anderson believes it would be an interesting exercise to examine the DNA mechanisms at work in stable A. gallica and in cancer cells, which are highly unstable.

“It could be an interesting point of comparison,” he says. “Cancer is so unstable, mutates at a high rate and is prone to genomic changes, while A. gallica is a very persistent organism with few mutations.”

Anderson, who has since retired from U of T Mississauga, says it was the perfect note on which to end his formal career since “I was just doing what I love.”

The research was supported by the Natural Sciences and Engineering Research Council of Canada (NSERC).