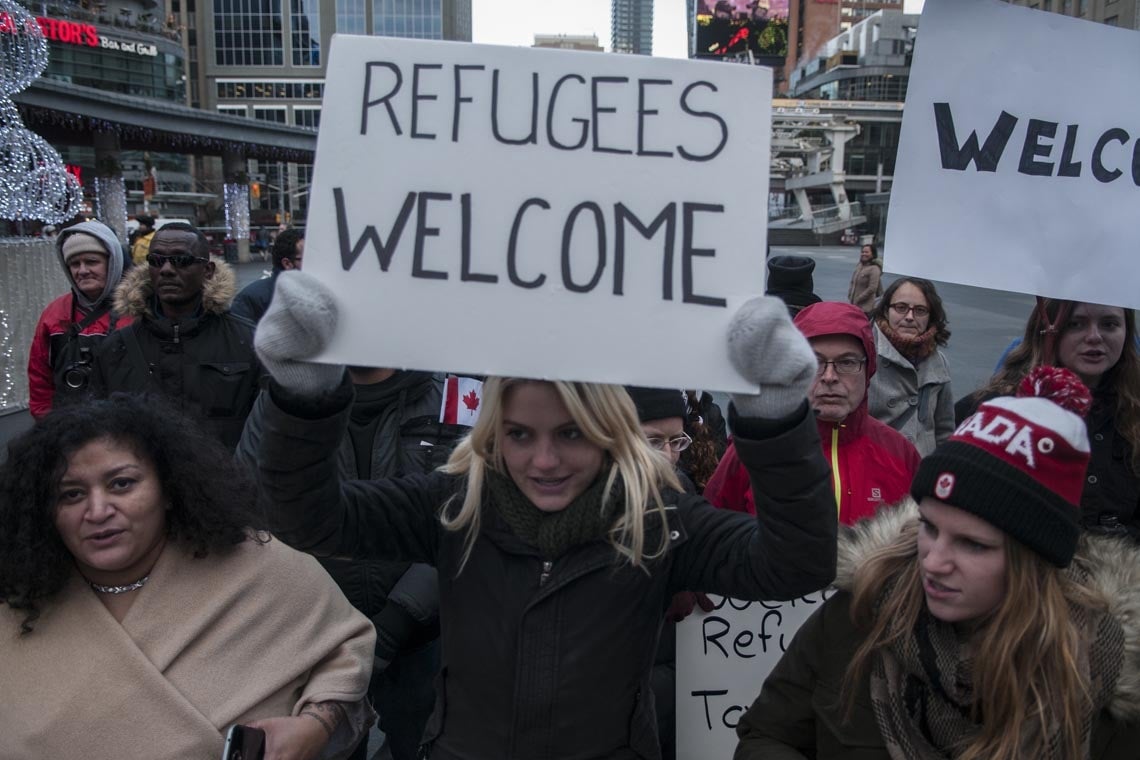 A pro-refugee rally in Toronto in November 2015 (Photo by NurPhoto/NurPhoto via Getty Images. Photo of Michael Ignatieff by Steve Frost

Syrian refugees received a warmer welcome in Canada than in Europe last year partly because Canada used the language of hospitality rather than that of universal human rights, Michael Ignatieff told a standing-room-only University of Toronto audience last month.

Ignatieff is the President and Rector of the Central European University in Budapest. A U of T grad and former faculty member at the Munk School, he served as leader of the federal Liberal Party from 2008 to 2011. He recently joined the Munk School as a Distinguished Fellow. In his first talk in his new role, he described his recent field research into how global declarations of human rights relates to how people treat each other at a local level.

Ignatieff traveled to communities around the globe – including South Central Los Angeles, a favela in Rio de Janeiro and an informal settlement in South Africa – to talk to people about they perceived human rights. His research was funded by a grant from the Carnegie Council on Ethics and International Affairs.

His conclusions, which will be published in an upcoming book, are that local communities value what he called “ordinary virtues” – trust, tolerance, reconciliation, forgiveness and resilience. And these virtues are often in conflict with the notion of universal human rights that became popular after World War II, he said. “According to human rights universalism, our human identity trumps all our differences,” Ignatieff said. “That’s been crucial to human rights since 1945. The duties of common humanity, the asylum and protection claims of strangers trump the claims of citizens.”

People at the local level were willing to welcome strangers, Ignatieff said, on a case-by-case basis, and only if the newcomers recognized that the local people were granting them a gift by welcoming them.

“What it comes down to is: ‘Come in. I, the citizen, give you this gift of hospitality.’” In return, the citizen expects the newcomer to acknowledge that gift and be grateful for it.

In Europe, on the other hand, politicians used the language of universal human rights, implying that European countries had an obligation to let refugees in regardless of how citizens felt, Ignatieff said.

“Instead of seeing human rights flowing up from our inner nature, from our instinctive virtue, think of human rights as the rational thought experiment created after the Second World War to discipline partiality.”