How youth influenced the EU election – and could do the same in Canada: U of T expert 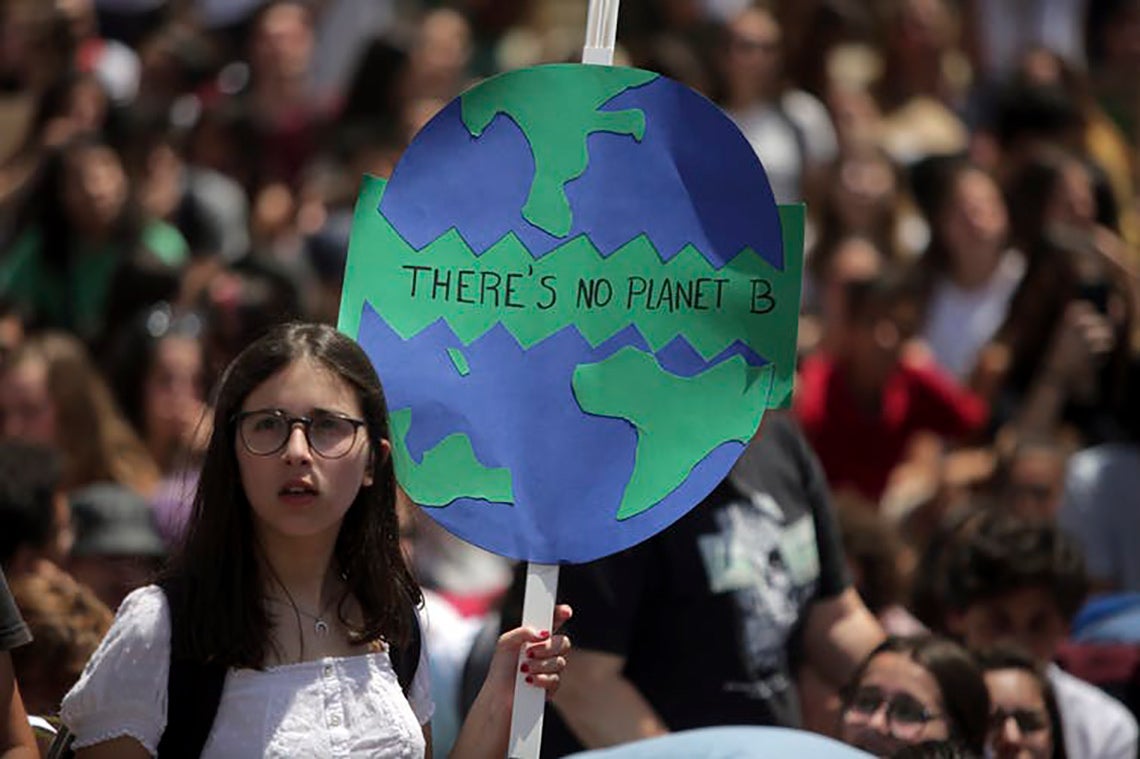 A demonstrator holds a sign outside the Portuguese parliament in Lisbon during a climate strike of school students on Friday, May 24, 2019 (photo by AP Photo/Armando Franca)

With major votes occurring within the span of five months this year, the European Union and Canadian federal elections are critical in deciding our planet’s future.

The results of the EU election – in which each European country elects an allotted number of representatives to the EU parliament – have already resulted in big changes, largely due to youth getting involved in politics.

Young people around the world are demonstrating a thorough understanding of the larger economic and environmental threats that are endangering not only individual freedom, but the very survival of our own species and more than a million others.

Around the world, youth protest movements like #FridaysForFuture have been growing steadily. Student protesters recently turned out in 120 countries and 1,700 cities to demand action on climate change just days before the EU elections on May 26. The next global student strike has already been announced for Sept. 20 and is expected to draw even bigger numbers.

It’s clear that young voters are bringing critical issues to the fore.

As Europeans headed to the polls to elect a new European Parliament, the notion of a European “Green New Deal” was a big campaign issue. The German Green Party made history by coming in second place with 20.5 per cent thanks in part to the increased voter turnout in Germany (61.4 per cent).

The shift was due mostly to many first-time voters casting their ballots for the Greens, who won the highest support in the 18-to-24 cohort — 34 per cent — and 27 per cent in the 25-to-35 age group..

There was a renewed brawl pitting democratic eco-socialists and liberals against conservatives and far-right parties, as Europeans witnessed most strikingly in the first debate of the lead candidates of the pan-European parties.

The debate focused on “digital Europe,” “sustainable Europe” and the future of Europe.

The prospect of a European Green New Deal — popular among young voters — has been increasingly paired with renewed discussions about democratizing the European Union not just politically, but also economically.

Yanis Varoufakis’s transnational party European Spring included a Green New Deal in its platform, with the following pledges: “To dismantle the habitual domination of corporate power over the will of citizens; to re-politicize the rules that govern our single market and common currency.”

The party only marginally missed the threshold for securing seats in Germany and Greece, but more than 1.4 million Europeans voted for a Green New Deal. In Spain, the Socialist Party (PSOE) won on a Green New Deal platform.

The European Greens, with 69 projected MEPs in the European Parliament, will certainly need to respond to calls from the Left Bloc (38 seats) and the Socialists and Democrats (153 seats) to work together on making Europe environmentally green and socially just.

They’ll have to do so while dealing with MEPs from pan-European parties like Volt Europa who want to democratize the European Union as far-right parties like Alternative für Deutschland (AfD) embrace increasingly nationalist and isolationist views.

The EU environmental agenda is also being shaped by particular national New Green debates. For example, in Germany, there is talk of reappropriating apartment units and car manufacturers to alleviate inequality and establish a more sustainable Europe.

Soon after discussions about nationalizing real estate properties emerged in the state of Berlin, Kevin Kühnert, the head of the 80,000-member-strong youth movement of the Social Democratic Party of Germany (SPD), was recently in the news for public remarks calling for the nationalization of corporations like BMW as well.

BMW is in the spotlight due to allegations it “breached EU antitrust rules from 2006 to 2014,” according to the European Commission. It’s being investigated for allegedly using illegal defeat devices to cheat regulatory emissions tests.

It’s not just young people making the case for abolishing private ownership of some entities. These daring remarks by young people, sometimes considered taboo, have inspired older generations, too. As Germany celebrates the 70th anniversary of the Federal Republic and its German Basic Law, even Baby Boomers are reminding the public about the law’s Article 15 that allows the nationalization of private property.

Demands for action on climate change are growing louder every day. British parliament recently declared a climate emergency due in part to ongoing protests organized by the Extinction Rebellion movement, which has also been supported by #FridaysForFuture student activist Greta Thunberg.

The strong representation of Democratic Socialists federally in Germany, including young socialists up to the age of 35, is beginning to take hold across the Atlantic, where the Democratic Socialists of America, whose membership stands at 60,000, have also amassed more than 200,000 followers on Twitter.

While Canada seems to be lagging behind when compared to the European youth activism, voter turnout for those aged 18-24 increased by 18 percentage points from the 2011 federal election to 57.1 per cent in 2015.

And although provincial elections in Alberta and Prince Edward Island resulted in Progressive Conservative governments, the Green Party of P.E.I. are the first Greens in Canada to become the official opposition.

The progress is happening as many young Europeans and Canadians look up to young leaders like Germany’s Kühnert and Alexandria Ocasio-Cortez in the United States as they advocate Green New Deals. It’s time for young people in Canada to get more involved politically if they want to have a shot at saving the planet. For now, #FridaysForFuture may be a good way to start.

Tobias Wilczek is a PhD student in department of Germanic languages and literatures at the University of Toronto.