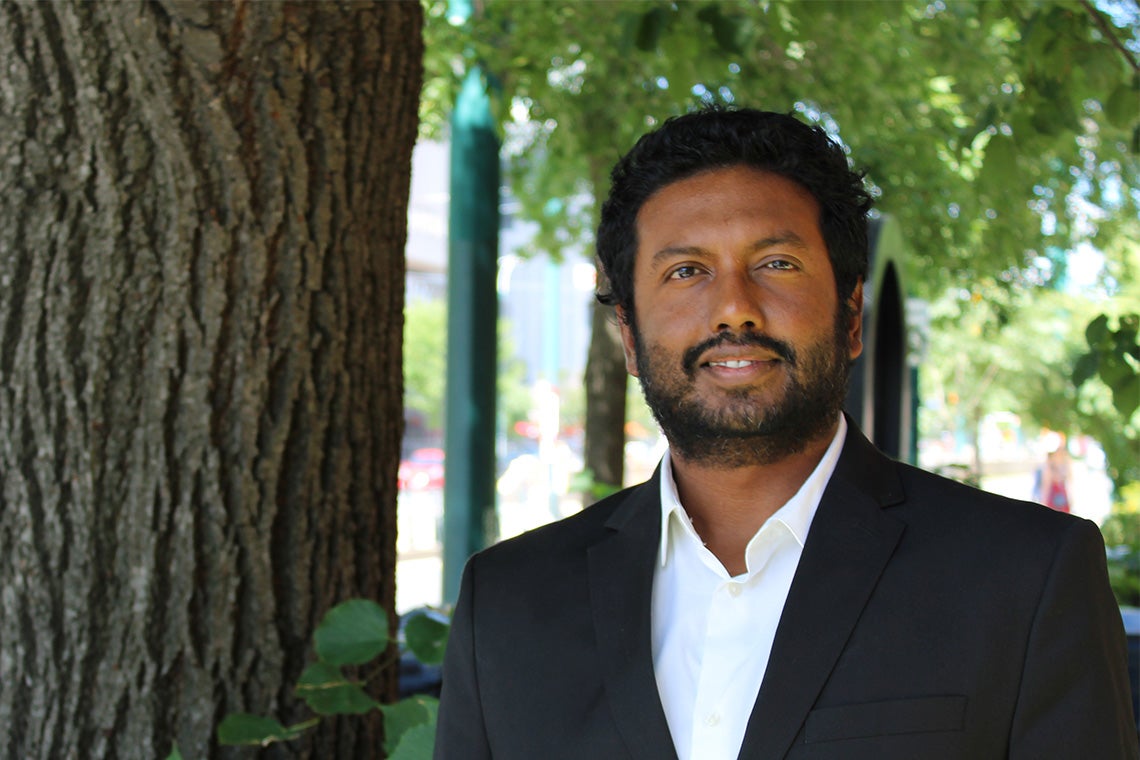 Prasanna Balasundaram, a refugee and immigration lawyer with U of T's Downtown Legal Services, was one of nine lawyers involved in the Charter case against the Safe Third Country Agreement between Canada and the U.S. (photo by Nina Haikara)

In a landmark decision, a federal court ruled this summer that the Safe Third Country Agreement (STCA) between Canada and the United States violates the Canadian Charter of Rights and Freedoms.

Prasanna Balasundaram, a refugee and immigration lawyer with Downtown Legal Services (DLS), a community legal clinic and clinical education program operated by the University of Toronto’s Faculty of Law, represented two refugee applicants in the case.

Several students from U of T’s Faculty of Law played a key role when it came to research, analysis and other legal tasks.

“In terms of the evidence and the issues, it was always very clear to us what the right outcome would be, but the nature of these challenges – to persuade a court to strike down a piece of legislation – are quite complex,” Balasundaram says.

The Safe Third Country Agreement requires refugees to claim status in the first country of arrival as part of a “refugee burden sharing” agreement. But refugee advocates argued this resulted in potential refugee claimants being turned back at the Canada-U.S. border, where many were detained by U.S. authorities.

One of Balasundaram’s clients, Nedira Jemal Mustefa, a Muslim woman, entered the U.S. alone at age 12 on a visitor’s visa for medical treatment. Balasundaram says her visa lapsed and Mustefa, then a minor, was unaware she had to take steps to regularize her status. He says she later discovered she did not qualify under U.S. law and was unable to return home because civil unrest in Ethiopia made it unsafe.

When she was later denied entry into Canada, Mustefa was held in Clinton County Correctional Facility in New York state.

“The experience of our client, as well as several others who we had testimony from, is at the port of entry they get placed into the custody of U.S. state authorities and, in the vast majority of times, are taken to a detention centre and detained for a number of months,” Balasundaram says.

He says Mustefa was detained at a criminal holding facility, even though there were no criminal charges. She was also held in solitary confinement for days.

“The conditions she described, which the judge acknowledged and found credible, were horrific,” Balasundaram says. “Are her constitutional rights violated? The judge essentially determined that they were.”

Balasundaram explains that Section 7 of the Charter guarantees everyone has the right to life, liberty and security of person, and that those interests ought not to be infringed unless in a manner that is consistent with the principles of fundamental justice. The language of the Charter applies to everyone who is within the boundaries of Canada, including its ports of entry, according to Balasundaram.

“The judge recognizes the evidence of Mustefa, as well as other people who have been turned back to detention, which infringes their liberty and security of person. The [judge] finds there is no real justification for why this happens.”

There were nine lawyers on the counsel team and Balasundaram says more than a dozen U of T law students worked on the case over the past four years. The students were instrumental in everything from in-depth legal research – gathering, analyzing, distilling evidence – to client interviews, he says.

Alexander Smith, who is in U of T Law's JD program, says applying classroom learning on constitutional law jurisprudence to a challenge that had a far-reaching impact on refugee and immigrant communities across North America has been a highlight of his studies.

“I am grateful to have had the opportunity to work with the incredible counsel team, including Prasanna,” Smith says. “Every student and client who works with him witnesses first-hand his thoughtfulness, compassion and first-rate advocacy.

“The mentorship and hands-on experience that he provides to students is something that I aspire to provide to the next generation of lawyers in my legal career.”

Supervised by a team of expert staff lawyers, more than 130 U of T law students work at the clinic every year to provide free services to over 2,000 clients.

“We’re doing work that really makes a difference in the lives of marginalized people. Whether it be preventing evictions, family law or employment issues, students who have gone through the DLS program will tell you it is among the most transformative experiences in law school,” Balasundaram says.

“These results demonstrate the power of experiential learning programs,” says Lisa Cirillo, the clinic's outgoing executive director. After a decade of leading the clinic, Cirillo will join the Law Foundation of Ontario  as its chief executive officer this fall.

“Every law student who had an opportunity to work with Prasanna on these cases over the last four years, has learned about the power and the limits of the law as a mechanism for delivering justice – and brought this experience with them into their own practice.”

The Canadian government has six months to comply or appeal the decision. Meanwhile, Mustefa remains in the U.S.

“Our hope is that she will be able to come to Canada,” Balasundaram says.