How to stop sitting yourself to death

The Conversation with U of T's David Alter 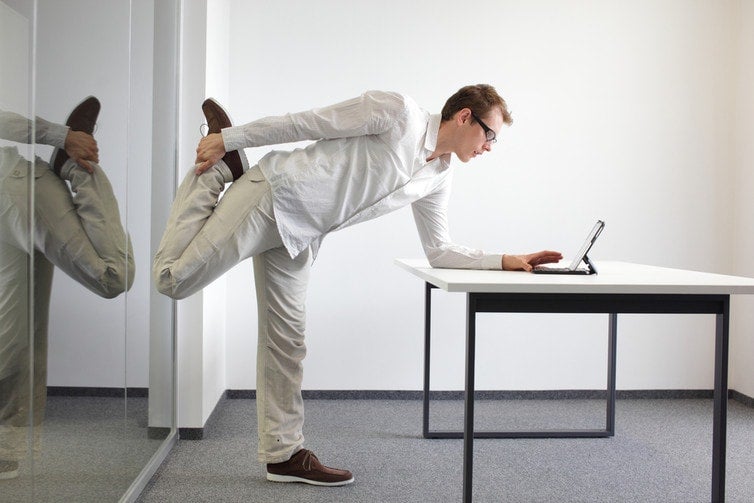 When we sit, we accumulate calories and excess fat, which can cause obesity, diabetes, cancer, heart disease and death. The solution may be as simple as counting (photo by Shutterstock)

Sitting is probably killing you slowly – whether you exercise vigorously every day or not. Sitting has been referred to as the new smoking. And a recent study shows that risk of death begins to rise if bouts of sitting persist for longer than 10 minutes at a time.

How do we reverse this evolutionary trend towards laziness? This question preoccupies me, as a cardiologist and a senior scientist with the Toronto Rehabilitation Institute and University Health Network. In my clinical practice, I make certain that patients receive appropriate medical therapies to improve their quality of life and longevity. But physical activity is one therapy I cannot prescribe as effectively.

One solution is to think of physical activity as a “pill.” As with other medical prescriptions, this “pill” requires a preparation, a quantity and a strength.

We know that physical inactivity has significant adverse implications to our health. A recent study examining more than 130,000 patients from more than 17 countries worldwide estimated that one in 12 deaths could be prevented if everyone exercised 30 minutes per day, five days per week at just moderate intensity.

Exercise prevents many chronic diseases, including heart attacks, strokes, diabetes and cancer. It improves our cardiopulmonary fitness levels – a measure of how efficiently our oxygen is extracted from our blood into our organs and tissues throughout our body – and is linked closely to our overall health and survival.

Now evidence suggests that our sitting times and sedentary behaviour also have important impacts on health, irrespective of physical activity levels. For example, a recent review by our team found that sedentary times of six to nine hours or more per day are associated with a higher risk of death, cancer and cardiovascular disease. The greatest risks are linked to Type 2 diabetes. In this study, moderate physical activity only partially reduced, but did not eliminate, the risks.

The duration we sit at any one time may also count against our health. Patients who sit for prolonged periods burn fewer calories than those who stand or move frequently throughout the day. Insufficient calorie expenditures may result in excessive fat, which may be toxic to our metabolism. Such toxicity can give rise to chronic diseases such as obesity, diabetes, cancer, heart disease and death.

In sum, while moderate to vigorous physical activity may improve our fitness levels, sedentary behaviour may accumulate calories and fat. Each behaviour affects our health and survival in different ways.

As humans, we are primed to move. One needs only to look at babies and toddlers who, once they have acquired the motor development skills to crawl and walk, rarely keep still. To explore their environment, they need to move through space.

Then, at some point, a child becomes more sedentary. Perhaps through their first exposure to TV, their first video game or internet search, children realize that their quest for self-discovery need not involve movement. The seeds of the disease known as physical inactivity are planted, with devastating physical and psychosocial health impacts. Parents may offer little treatment to their children, for they too have been inflicted.

Of course, things weren’t always this way. From an evolutionary perspective, we were once hunters and gatherers. This necessitated high amounts of physical activity throughout the day just to procure water and food for survival. It has been estimated that between one third and one quarter of the total energy consumed by our ancestors was burned through physical activity.

Contemporary humans burn a much smaller component of their total energy through physical activity. Even when compared against highly agricultural societies, the physical activity levels of most adults pale by comparison. For example, one study demonstrated that average daily steps taken in the U.S. population are less than half of that among older order Amish communities.

If this evolutionary trend continues, we are looking at a bleak future.

Counting can help you survive

To avoid sitting yourself to death, you can follow some simple strategies:

While humans are primed to move, urbanization, technology and societal norms have resulted in our physical stagnation. We have become sedentary, physically inactive creatures. And the solution may be as simple as counting.

As I sit here, I am reminded by my cellphone alarm that my 30 minutes of uninterrupted sitting must come to an end. My writing of this article must cease. I ask my nine year old to stop playing video games and to join me for a few minutes of catch outside. He reluctantly agrees, and proceeds by asking Alexa to turn off his TV on his behalf.

Oh well, at least it's a start.