In the hot seat: U of T expert on Tokyo's weather and how athletes can beat the heat 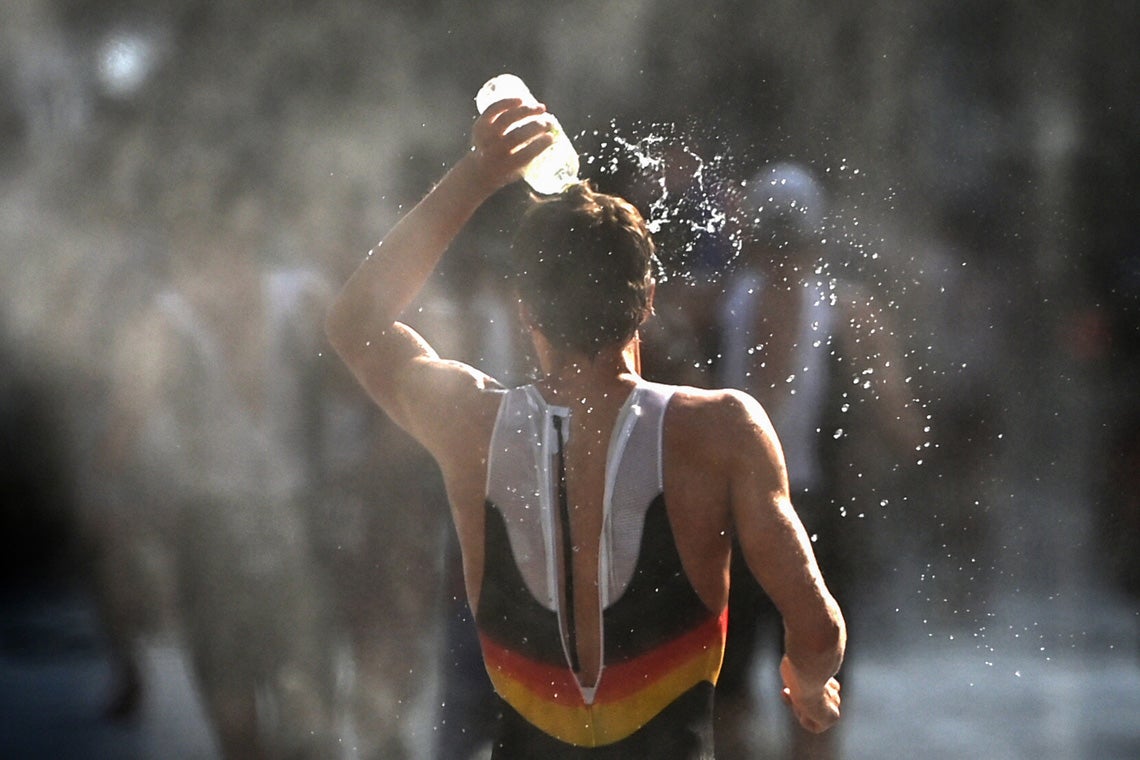 German triathlete Justus Nieschlag cools off at the Tokyo Games, where some athletes have struggled to beat the heat (photo by Sebastian Gollnow via Getty Images)

This week, Spanish tennis player Paula Badosa was forced to retire from the quarter final at Tokyo 2020 due to heatstroke, using a wheelchair to leave the court. Novak Djokovic and Daniil Medvedev have also complained about the heat and scheduling of matches during the day.

Ira Jacobs, a professor of exercise physiology in the University of Toronto's Faculty of Kinesiology & Physical Education, spoke to U of T's Jelena Damjanovic about the temperatures in Tokyo and what athletes can do to prepare for the heat.

How do heat and humidity affect athlete performance?

When it comes to physical performance and sports there is a downside to that shunting of blood to the skin surface. Because our bodies give a higher priority to trying to maintain body temperature within a critical range, the heart has to work all that much harder to both continue to shunt blood to the skin surface while also trying to provide oxygenated blood flow to the exercising muscles. The end result is that the cardiovascular strain during intense exercise is much higher when it’s hot. Therefore, that intensity cannot be sustained for as long as when it’s done at a comfortable temperature.

Another example of how our bodies try to regulate internal body temperature is sweating. The evaporation of sweat from the skin surface is one of the most important avenues of heat transfer out of human bodies when we are exercising. Anything that impedes sweat secretion or evaporation will have a negative effect on exercise or physical performance. How much and how quickly sweat can be evaporated is dramatically affected by air humidity. The higher the humidity, the lower is the capacity of that air to accept more moisture – which means that less sweat will be evaporated. More sweat simply drips off our bodies without being evaporated, and without removing as much heat from our bodies.

What can athletes do to adapt to extreme heat?

Fortunately, healthy humans can quickly improve their ability to cope with exercise in the heat. A period of 10 to14 days of daily exposure to a combination of heat stress and exercise will significantly improve the ability to exercise in the heat. Sweat rate increases, the volume of blood pumped by the heart per heart beat increases, heart rate decreases, blood plasma volume increases, the perception of how hard exercise feels decreases. These are but a few of the adaptations that help to preserve and increase exercise performance in the heat after a period of adaptation to heat stress.

So, Olympic athletes hopefully either went through a heat acclimation process a couple of weeks before their competitions in Japan, or they moved to Japan in sufficient time to give them a couple of weeks of natural acclimatization to Japan’s heat and humidity.

Is there something the International Tennis Federation (ITF) can do to protect players' health? Perhaps schedule matches when it's cooler?

Frankly, I was surprised to learn that the scheduling of outdoor events like tennis at the Olympics did not start off with matches being scheduled to times that corresponded with reduced environmental heat stress. I read that they have now done so.

Many industrial, military and sporting organizations have standards whereby no hard work, training or competitions can take place when the heat index (an index of the combined effects of air temperature and air humidity) exceeds certain limits.

Longer rest intervals between sets; a longer break when changing courts within a set; cooling stations courtside where players could insert the arms and hands into cold water while on a break – these are all examples of simple strategies that are employed in many other occupational and sport settings to reduce the health risks of high intensity physical exertion in the heat.