History in 3D: U of T researchers piece together the past with new scanning technologies 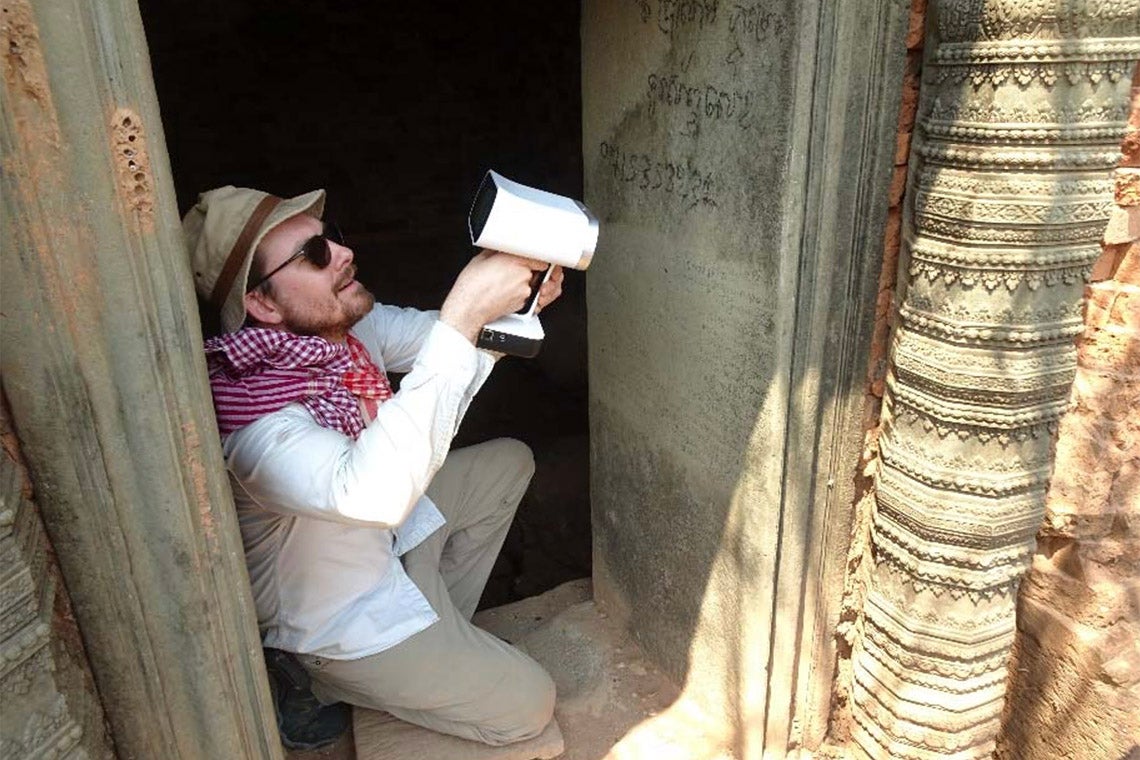 As director of the Tayinat archaeological project in Turkey, Tim Harrison saw the need and potential for 3D scanning and modelling technology.

Harrison, chair of the University of Toronto’s department of Near and Middle Eastern civilizations in the Faculty of Arts & Science, has for years conducted research in the region of the Orontes River, which flows from Lebanon through Syria and Turkey. Populated continuously for thousands of years, the region’s rich history is reflected in a wealth of archaeological finds.

However, archaeological finds are rarely uncovered whole or in pristine condition.

“We’ve found thousands of fragments of broken sculptures,” says Harrison. “It’s like a jigsaw puzzle, but it’s a three-dimensional puzzle and you only have maybe five per cent of the pieces.

“So, we became very interested in the development of fast, high-resolution scanning technology that would help generate 3D images that we hope to eventually import into shape-matching software that will help solve these puzzles.”

The 3D scanning and modelling that Harrison and his colleagues are doing is accomplished using portable, hand-held scanners that can be used in the field. They are also developing shape-matching software with a team led by Eugene Fiume, a professor emeritus in the faculty’s department of computer science.

One goal is to create 3D models of pieces of pottery or statues and rebuild them digitally the way you might rebuild a broken coffee cup by fitting its pieces together. Another is to identify artifacts such as pieces of pottery by comparing their shape to a database of similar pieces.

“Eventually, we also want to compare texture, colour, chemistry and mineralogy,” says Harrison. “The more layers of information you add, the more patterns and matches you can make. We're not quite there yet, but that’s the direction we’re headed.” 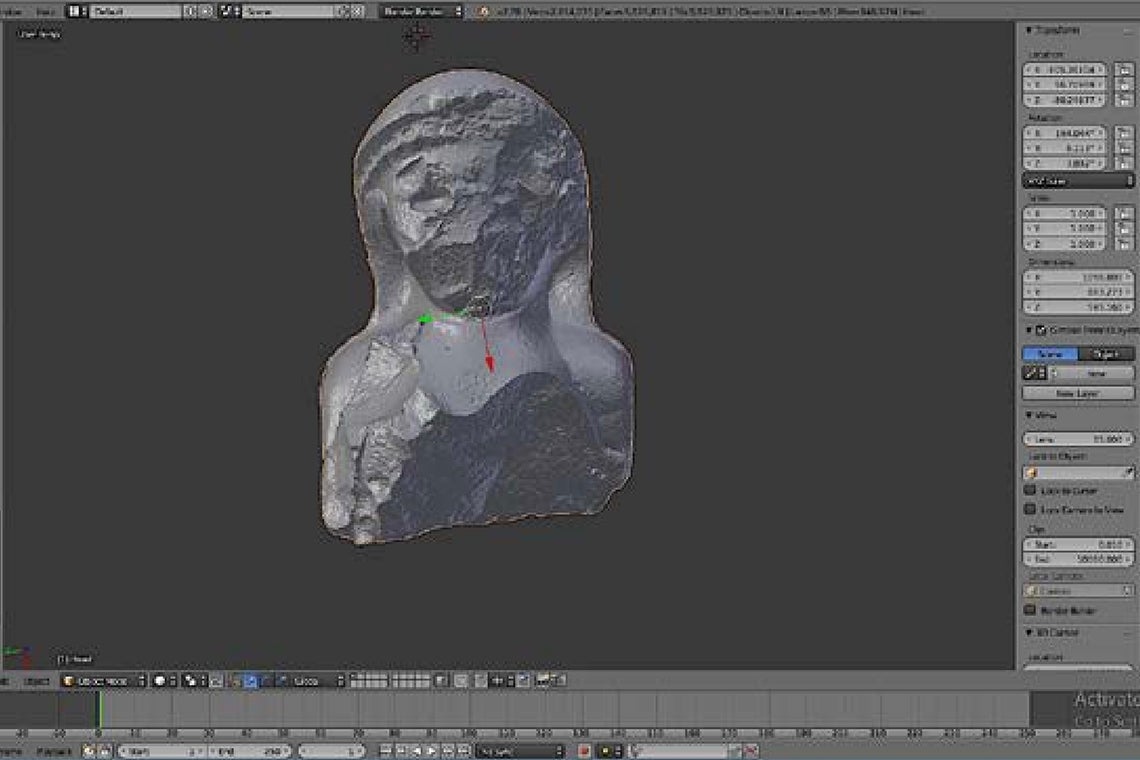 A 3D model of the Lady of Tayinat, a statue from the Tayinat archaeological project (Image courtesy of the Tayinat Archeological Project; Tim Harrison; Steve Batiuk)

Stephen Batiuk, a senior research associate in the department of Near and Middle Eastern civilizations and a member of the Tayinat team, says “3D modelling quite literally introduces a new dimension to our research, providing us with new ways to measure objects, visualize them and help in reconstruction.

“Plus, since many of these artifacts can’t leave the countries from which they were excavated, it extends our ability to do research on them beyond the field season and allows others who were not there to work on them as well.”

As powerful as it is, 3D scanning is just one tool in the toolkit.

In 2011, with funding from the Social Sciences and Humanities Research Council of Canada (SSHRC), Harrison and his colleagues launched an organization called Computational Research on the Ancient Near East, or CRANE. CRANE was originally conceived as an effort to build a large collaborative environment for different archaeological projects and researchers working mostly in the eastern Mediterranean. At its core are powerful computational tools for modelling ancient social groups, analyzing complex and diverse data sets from those researchers – and it will even be used to validate climate change models with archaeological data.

The 3D capability is part of what Harrison refers to as “CRANE 2.0.” It’s made possible through a partnership grant – including funding from SSHRC and the Faculty of Arts & Science – that provides support to the Archaeology Centre’s Digital Innovation Lab. With this support, researchers in other departments can apply the technology to their own realm of the ancient world.

“The technology was purchased by CRANE for CRANE work,” says Batiuk. “But all archaeologists at U of T  can benefit from us having bolstered the Digital Innovation Lab. This is a spirit of co-operation that CRANE is trying to promote, especially when using university funds.”

Ed Swenson is an associate professor in the department of anthropology and director of the university’s Archaeology Centre. Last winter, Swenson, his former doctoral student Giles Spence Morrow – who is now with the anthropology department at Vanderbilt University – and other colleagues conducted research at ancient sites from the Angkor Empire, which was based in present-day Cambodia and dominated much of Southeast Asia. The work was supported by a grant from the Hal Jackman Foundation.

The team surveyed and conducted excavations of religious temples and complexes built near the end of the first millennium CE. They employed traditional archaeological methods and tools in their work, as well as drone cameras. They also used CRANE’s portable scanners to create 3D models of statues, stone monuments and architecture, and to record inscriptions to facilitate translation and share with other researchers.

One of their most remarkable discoveries: pieces of a statue that likely formed a three-metre-tall likeness of a divine figure. The team discovered two feet attached to a base. Nearby they found a shoulder, an arm, part of a leg and the torso. The head is still missing.

The team scanned the pieces and re-assembled both the actual statue and its digital facsimile.

“The application of 3D scanning to create models of architectural complexes and artifacts has revolutionized our research,” says Swenson. “It permits continued, detailed analysis long after the close of excavations and on-site laboratory analysis.

“In other words, one can literally revisit and restudy sites that are accurately recreated in three-dimensional simulations. The models also offer an invaluable teaching resource as it allows students to fully experience and analyze virtual archaeological datasets.”