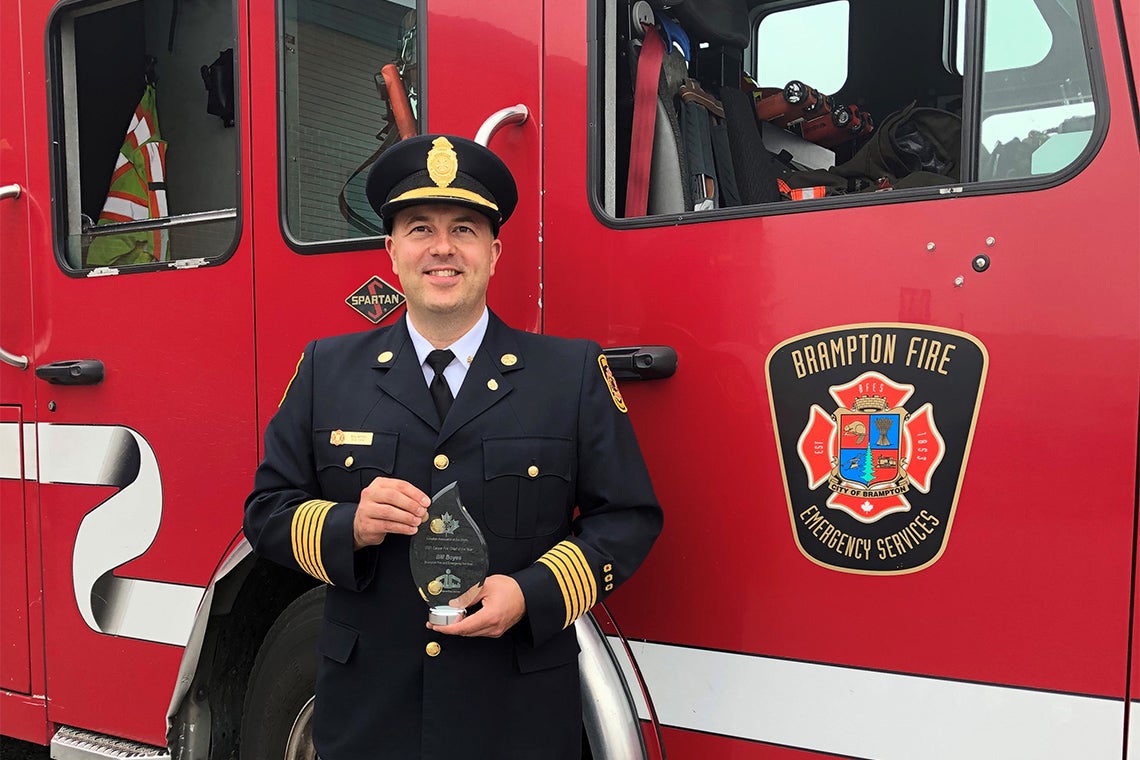 Brampton Fire Chief Bill Boyes, pictured here with his Fire Chief of the Year award, is using his doctoral studies at OISE to explore how the Ontario fire service can improve diversity, equity and inclusion at all levels (photo courtesy of Bill Boyes)

Bill Boyes is familiar with juggling multiple tasks. The fire chief for the City of Brampton, Ont. leads about 550 firefighters and works with the municipality’s emergency management response team, where he connects with public institutions to ensure the city mitigates the spread of COVID-19 and excels as a place to work and live.

He also has two young children at home – and, on top of all that, is pursuing a PhD at the University of Toronto’s Ontario Institute for Studies in Education, which he hopes will allow him to forge a new path for his profession.

With a dissertation that focuses on the professionalization of the fire service in Ontario, Boyes says he’s particularly interested in making the service more diversified and equitable to better reflect the population it serves.

“I believe we have a long way to go, but how do we get there? How do we move forward? Why are we where we're at now?” says Boyes, who is working part-time on the degree in OISE’s department of leadership, higher and adult education. “That's what I want to try to uncover. I want to see if we, through a qualitative lens, can try to make some improvements in our fire service because I think it’s important for the sustainability of an essential public safety service.”

Boyes adds that he sees tremendous opportunity to improve diversity, equity and inclusion across all levels – from front-line responders to chief officers in leadership roles.

Leesa Wheelahan, Boyes’s dissertation advisor, says Boyes’s work has a social justice lens because everyone should have access to these occupations and because firefighters can't do their job unless they reflect the community that they serve.

“Bill is trying to transform his own occupation so that it's more inclusive, that it represents the community – but he's also trying to think through what it takes to work in that occupation,” said Wheelahan, a professor in OISE’s department of leadership, higher and adult Education.

Wheelahan has worked with other PhD students who come from emergency services. For her, it’s a chance to make an impact in these essential public roles. “For me, having students do PhDs in these areas are of fundamental importance to understanding, renovating and rejuvenating our public institutions,” she says.

She has been working with Boyes on his research since he began his studies at OISE. They meet every couple of weeks to talk about what he is reading, and how its helping him understand his topic.

“He is very theoretically sophisticated. He’s open and ready to consider a range of perspectives,” she says.

Boyes hopes to directly apply his studies to his work, citing the need for more thought on the kind of education that firefighters need. He also cites the need for a regulating body and a code of ethics as possible paths forward for fire services.

“One thing about the fire services is that our roles are expanding so much that we're getting into things that the fire service wasn't involved in decades ago,” says Boyes, who is a third-generation fire chief.

“We're front-line on emergency medical responses where we are seeing the devastating impact of COVID. But we also do things like technical rescues, hazardous material response and non-emergency services like public education.

“The term firefighter is such a misnomer.”

His efforts haven’t gone unnoticed. In September, he was awarded Fire Chief of the Year by the Canadian Association of Fire Chiefs (CAFC) and the Fire Underwriters Survey of Canada. The award recognizes excellence in the fire services industry across Canada.

“To be named Fire Chief of the Year for Canada is pretty awesome – especially given COVID-19 and its challenges,” says Boyes. “I feel very honored.”

Ultimately, Boyes hopes his degree will help him make an impact in Brampton, Ontario and beyond.

“There are very few, if any, chief officers who have a PhD, so it will be quite an achievement if I can do it,” he says. “I hope to give something back to the fire service and leave it stronger for future generations.”