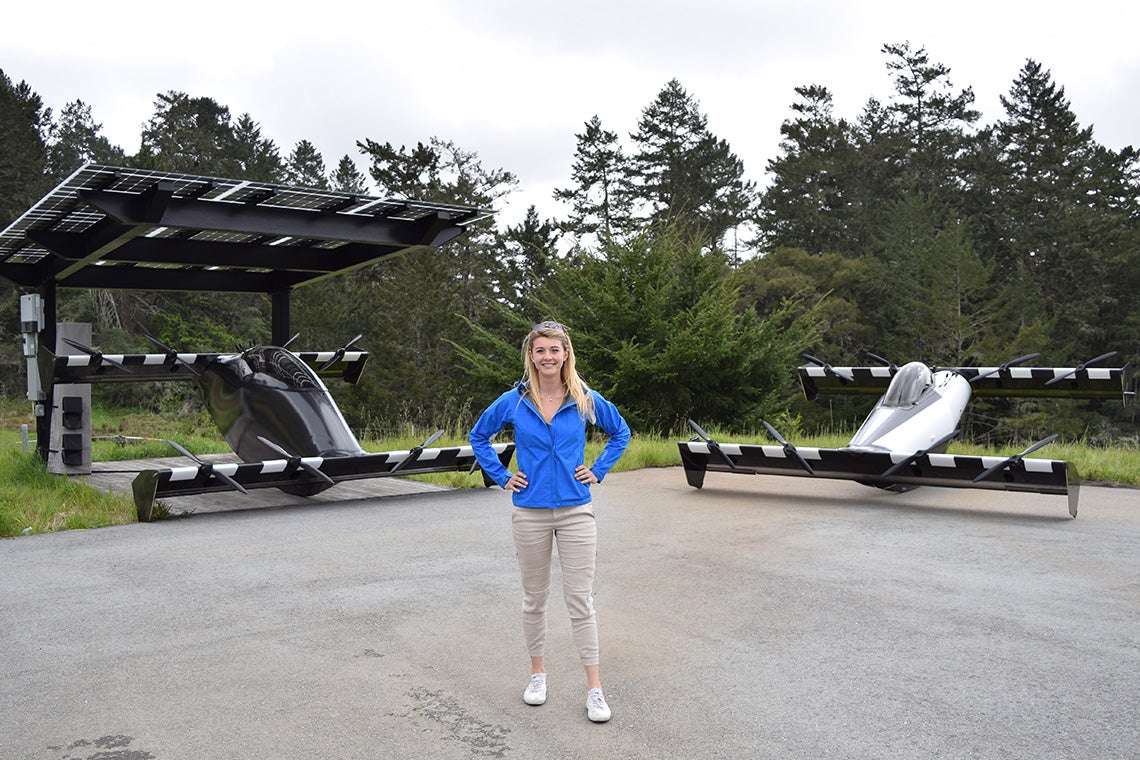 Kristina Menton loves airplanes. “I love everything about their aerodynamics, the beauty of the physics that make them fly,” says the alumna of the University of Toronto’s Faculty of Applied Science & Engineering.

Lately, Menton has been experiencing those aerodynamics first-hand.

She’s the director of operations, flight testing and propulsion at Opener, a company developing an all-electric, single-passenger aircraft capable of vertical take-offs and landings called the BlackFly.

“It’s not a flying car, because it doesn’t have wheels and it can’t go on the road,” she says. “It is a personal aerial vehicle. It takes someone from point A to point B – through the sky.”

Menton didn’t apply for a job at Opener – the company came looking for her while she was still an undergraduate student in the department of mechanical and industrial engineering. She already had experience with jet engines, having interned with Pratt & Whitney Canada through U of T Engineering’s Institute for Multidisciplinary Design & Innovation.

But her new job was something else entirely.

“I loved working in aerospace, but, generally speaking, it’s a slow-moving industry,” she says. “What made this exciting was the chance to be at the leading edge of something new, which is electric aviation. I’m not someone who generally says no to a challenge.”

At first, Opener was operating in stealth mode; Menton couldn’t even tell her friends and family what she was working on. Within a year, she was made head of propulsion. Soon after, she got her first chance to take a test flight.

“I had seen the aircraft fly autonomously for thousands of kilometres, so I knew it was safe,” she says. “I also spent a lot of time in the simulator, so the controls felt quite natural. I just sat back to enjoy the ride, which was even smoother than I expected. Being able to see 180 degrees across the horizon, to just float there in the air – it was a very enjoyable experience.”

In the summer of 2018, the company launched its website, enabling potential customers to see the BlackFly in action. If all goes according to schedule, the first batch of vehicles will be for sale by the end of this year.

Menton says there is “no such thing as a typical day in the office” at Opener, and that every one of the company’s 50 employees needs to wear multiple hats.

For example, in addition to her work on propulsion design, Menton recently took on the role of flight testing co-ordinator. Managing field safety protocols, personnel and service schedules, hardware availability and changing weather conditions across three test sites has been a challenge, Menton says. But she adds that time management is one of her strengths.

“I remember when I was in first year, I found for the first time that I couldn’t do everything I wanted to,” she says. “I was working on problem sets with my classmates until 2 a.m., and then I had to be up for varsity basketball practice at 6 a.m. You learn how to function under pressure, and how to get everything filed into slots throughout the day.”

During her undergrad, Menton also managed to carve out time to participate in high school outreach programs for young women who may be considering engineering careers. In part, she wanted to give back after being mentored by female professors such as Dean Emerita Cristina Amon and Professor Jean Zu, who is now dean of the Schaefer School of Engineering and Science at Stevens Institute of Technology.

Menton recently appeared in the “Changemakers” issue of the Globe and Mail’s Report on Business magazine.

What advice would she give to those who want to follow in her footsteps?

Menton also notes that women are still forced to overcome challenges in the workplace.

“As you climb the ranks, you’ll notice fewer and fewer women around you. At those times, it’s important to speak your mind, to not take ‘no’ for an answer and to find other women who can support you. I’ve had those mentors and I continue to find them now. They can help you keep pushing for what you actually want.”