With her debut novel a bestseller, U of T alumna Amita Parikh aims to help underrepresented writers 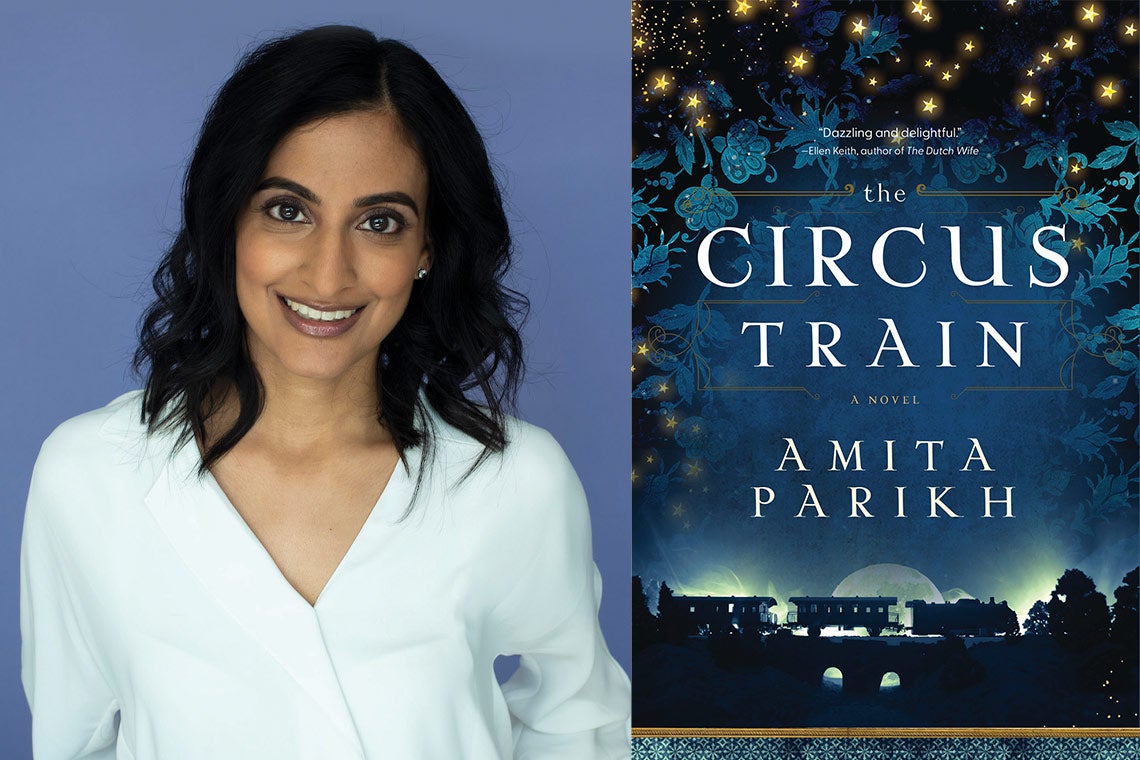 Amita Parikh began writing what she hoped would someday become a book in 2014, publishing her debut novel, The Circus Train, earlier this year (photo by Helen Tansey)

Amita Parikh was a member of Victoria College when she was a student at the University of Toronto – just like acclaimed author Margaret Atwood.

Now, Parikh has something else in common with Atwood: a novel on the Toronto Star bestselling books in Canada list.

“I'm certainly not putting myself in the same company, but it makes me laugh looking back on it. I couldn't have predicted I would write a book, let alone a bestselling book,” says Parikh, who earned her honours bachelor of science from U of T’s Faculty of Arts & Science in 2006 with a major in human biology and minors in Spanish and zoology.

The Circus Train tells the story of Lena Papadopoulos, the daughter of an illusionist at the World of Wonders, a travelling circus that tours around Europe during the Second World War. Fascinated by science, Lena feels out of place at the circus – until her life is turned upside down when she rescues a mysterious stowaway.

The Circus Train was published by HarperCollins Canada in March 2022 and became an instant national bestseller.

“Lena’s love of science and medicine was largely a result of me studying at U of T,” Parikh says. “I learned and was exposed to so much. I remember in one of my bio labs, we isolated DNA in its purest form, and I thought that was so cool.”

There are several links to U of T throughout the novel. For example, Lena’s visits to anatomy museums were inspired by Parikh’s time in Grant’s Museum in the basement of U of T’s Medical Sciences building. Lena has polio and uses a wheelchair, an aspect of the text informed by Parikh’s studies of how the polio vaccine was developed and how the virus affected children.

Lena’s feelings of isolation were also inspired by the author’s experiences. As a life sciences student, many of Parikh’s classmates were studying to become doctors or pursue academia, but neither of those career paths felt like the right fit.

“I felt so out of place and alone, like I’d failed somehow,” she says. “But looking back, I am really proud that I stuck it out and finished, and I'm very proud to say I'm a U of T graduate.”

Parikh resolved to figure out what she really wanted to do and follow her passion. As a student, she loved writing for The Varsity, so she pursued journalism after convocation. After a couple of years, she switched to the tech industry and moved to Europe to build a career as a marketer and web developer. In 2014, she picked up writing again – this time creative writing instead of journalism. She began writing what she hoped would someday become a book and enrolled in a writing course at night. Her debut novel was the result.

“People say, ‘That’s so strange. You studied science and you work in tech, but you write creatively,’” she says. “I actually think they’re so similar. To come up with solutions to the biggest problems we have, you have to be really creative. You have to be creative at coding in tech. In science, how do you come up with a vaccine? You have to think on a different level.”

“I’m still trying to wrap my head around it,” Parikh says, referring to the novel’s success. “It wasn't something I expected. I just wanted to write a book and stay true to myself and create a world people enjoy. Everything else has just been icing on the cake. I'm thrilled that it's touched so many people.”

Between working in tech and writing her second novel, spare time is a rare commodity for Parikh. Yet, when she can, she likes to give back by mentoring aspiring writers. She’s also developing a scholarship for underrepresented writers.

“I often get asked, usually by other people of colour, ‘What was your experience like as a writer of colour?’ These conversations have come to the forefront, as they should,” she says. “Publishing is a very white industry. I do think it’s changing. But I can only speak from my own personal experience. I didn't have any pushback. I have not had anyone say, ‘What are you doing here? You’re not the right colour.’ But I’m aware that it happens.”

Her experience in publishing has been encouraging, she adds, recalling a conversation with her agent in which Parikh suggested using a pseudonym.

“I had been conditioned for so long to see books written by Indian authors only being about the immigrant experience or an Indian-inspired rom-com. I'm generalizing, but, by and large, that's what I was reading. And while I love reading those types of stories, I can’t write them. My agent said, ‘Things are changing, and you should be so proud of what you've done. You shouldn't feel like you failed your community because you chose not to write about your own cultural background. You're a fiction author. You can write what you want.’”

Parikh’s scholarship will aim to help mitigate the high cost of writing courses and increase access to these educational opportunities for underrepresented writers.

“Even though I didn’t experience pushback from publishers, I am aware it happens. I’ve been lucky and simply wanted to pay it forward a little bit. I just think we're better when there's more diversity all around.”