Healing begins on the land: How U of T's Dalla Lana School of Public Health is Indigenizing the teaching of public health 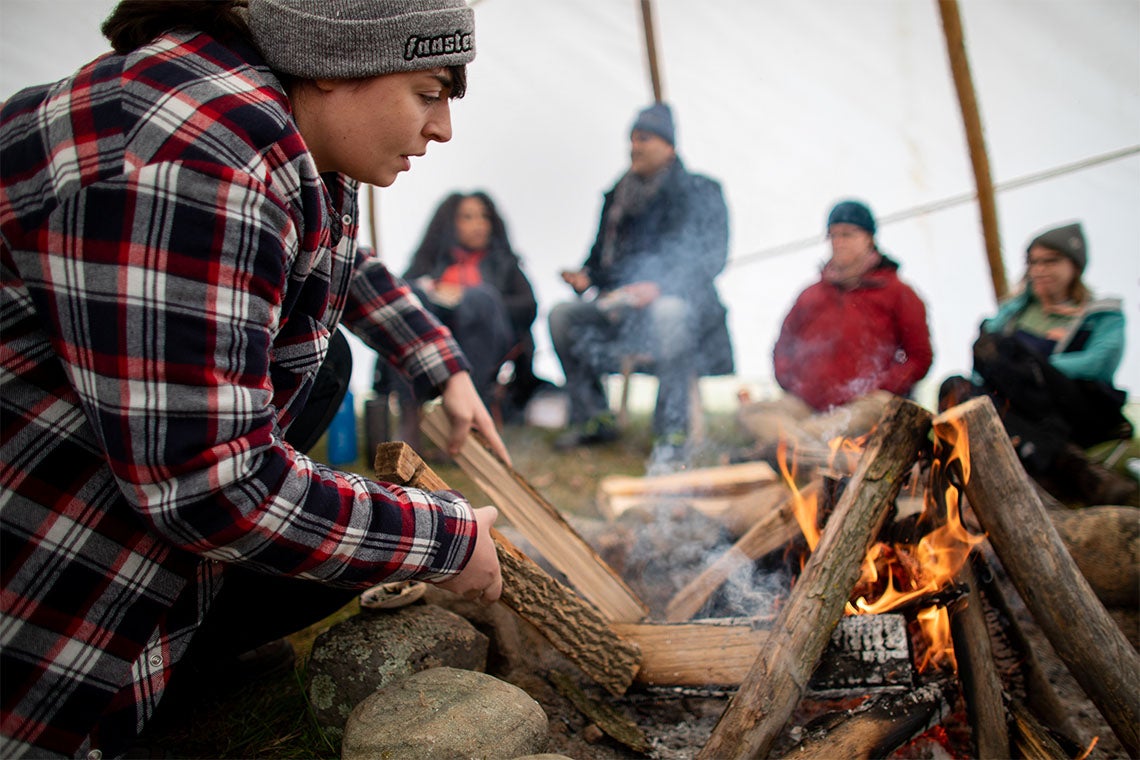 Students work at building a fire during a five-day land-based learning course, one of the first in Canada, held at Hart House Farm in late spring (all photos by Nick Iwanyshyn)

A dozen people – grad students, a public health nurse, a paramedic, a midwife and two physicians – had just finished a lesson in the proper way to split logs. Now they sat in a circle in a teepee trying to light a fire with metal.

“Learning how to make a traditional fire is teaching the self,” said Clayton Shirt, an Elder at the Dalla Lana School of Public Health’s Waakebiness-Bryce Institute for Indigenous Health. “It’s teaching patience and dealing with the fire within yourself. So it’s very sacred.” 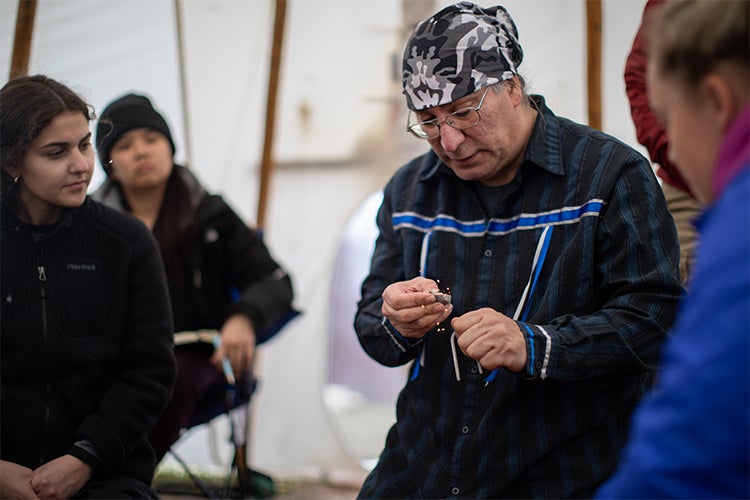 The day was raw and wet, an early spring afternoon at Hart House Farm, about an hour’s drive northwest of Toronto in the Caledon Hills. The students, all enrolled in public health or Indigenous studies courses at Dalla Lana or the Ontario Institute for Studies in Education, were spending five days learning about Indigenous health in one of Canada’s first land-based learning courses.

“I feel like it’s my responsibility to learn about Indigenous health as a non-Indigenous person entering health care,” said Alice Gauntley, who is finishing her second year studying health promotion in the Master of Public Health program. “But I’m also grateful to participate in these ceremonies. I don’t consider myself a spiritual person but I think it’s valuable for me to get out of my comfort zone.” 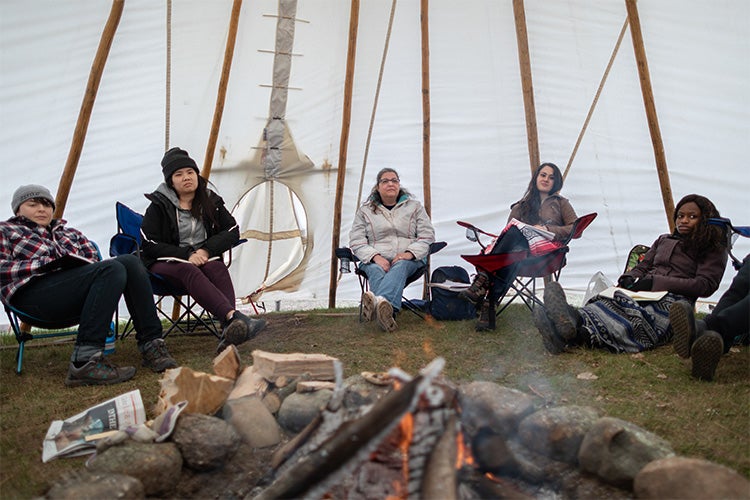 Learning on the land is really about learning from the land, said Angela Mashford-Pringle, an assistant professor and associate director of the Waakebiness-Bryce Institute and the second Indigenous person to receive a PhD from the school, in 2008.

“It’s the soil that’s teaching them,” she said. “The water, the plants, the animals and the trees are teaching through the Elders and Knowledge Keepers and me.”

During their time on the farm, students searched for wild ginger, learned how to make tea from cedar, and communicated with trees. But there were no chimes or water sounds playing in the background. Indigenous culture does not romanticize the land or shroud nature in New Age mysticism. The land is not an exotic other, said Mashford-Pringle. It is part of the self. She hopes that if students can understand that, they can begin to grasp why the residential schools, Sixties Scoop and other actions that separated Indigenous people from the land were so devastating to their health.

“If I first teach you how we relate to Mother Earth and Father Sky, and then I teach you about this trauma, maybe you can start to see how the loss of the land played into that trauma,” said Mashford-Pringle. “Taking the land was the first way of traumatizing Indigenous people.” 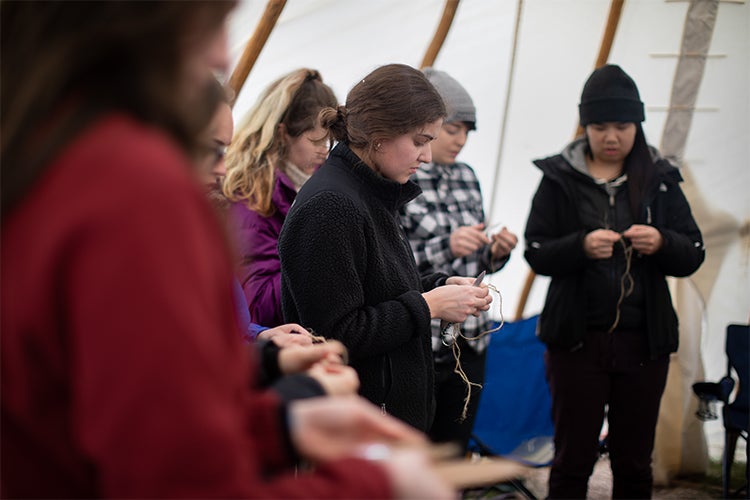 “Everything to do with Indigenous health is tied to spirituality, and spirituality is based in the land and in the relationship between land and people,” says the director of the Waakebiness-Bryce Institute about the land-based learning course

Many of the students in the land-based course work with Indigenous people already, but worry that a lack of cultural understanding is creating barriers to healing.

“Understanding cultural safety is important going into it,” said Campbell Drohan, a health promotion student with a summer practicum working on vaccination hesitancy with the BC First Nations Health Authority. “I’m hoping to have a sharing circle with people from the community to try to understand where vaccination hesitancy is coming from. We have to rebuild trust.”

“You see people in their lived environment, but what good is it when you don’t have the knowledge to understand it?” asked paramedic Priscilla Sisourath. “We have Indigenous patients, but no ability or capacity to give them the empathy they need.”

The move to land-based learning is an attempt to truly Indigenize the educational experience so that public health workers can begin to gain the kind of understanding they’ve been missing, said Suzanne Stewart, director of the Waakebiness-Bryce Institute. She hopes this shift in thinking will address the root reasons for many of the failures of public health institution programs to improve Indigenous health.

“The Western paradigm has privileged the mind. In Indigenous culture, it’s the spirit and the heart that makes decisions and guides our lifestyle and behaviours,” she said. “Everything to do with Indigenous health is tied to spirituality, and spirituality is based in the land and in the relationship between land and people.” 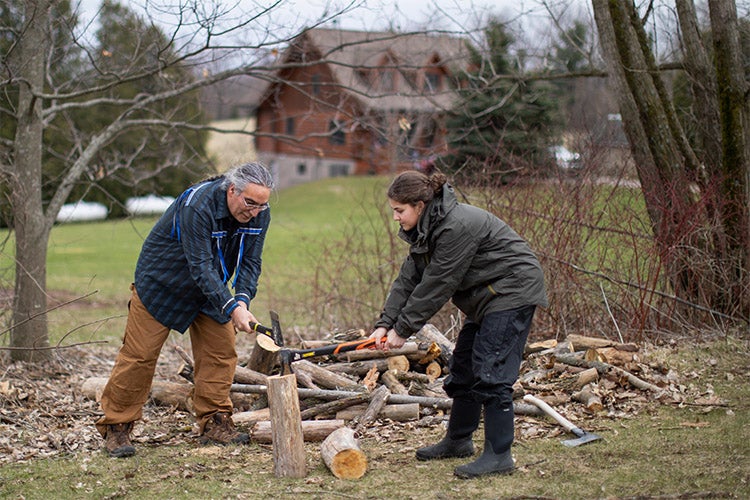 Debassige and a student chop wood: Leaders of the Waakebiness-Bryce Institute see land-based learning as an important step to teach the next generation of public health professionals the Indigenous perspective

Stewart said all of the courses, which include Indigenous public health, policy, research and environmental and food systems, will eventually be land-based. In the meantime, the institute is helping people connect to the land in meaningful ways. Every Tuesday and Thursday, Clayton Shirt, the Elder, works with homeless Indigenous men to cultivate Indigenous plants in a medicine garden at The Stop, a Toronto food security hub. The men prepare and eat spiritually nourishing meals together.

Mashford-Pringle is working on a plan to Indigenize the Dalla Lana building itself, bringing culturally important plants to the front façade. She is also speaking out about how the land acknowledgements, which have become a staple way to open meetings at U of T and other institutions in Toronto, are performed.

Although well meaning, Mashford-Pringle says the practice of acknowledging original inhabitants and treaties often becomes a box to check rather than a genuine attempt to Indigenize the gathering with a reflection on the relationship between the land and self. 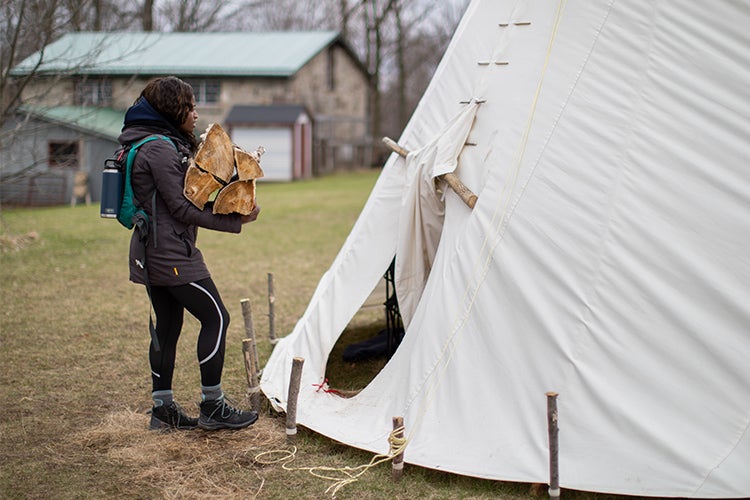 “If we’re not going to talk about how you as a person connect to this land, it’s worthless,” she said. “What does the Dish With One Spoon treaty mean? It’s about creating community and taking care of each other, but how many people who recite the words know that?”

The holistic emphasis on the land, another aspect of land-based learning, can also be a positive influence on environmentalism, which is still a Western movement, said Mashford-Pringle.

“Indigenous scientists will spend weeks observing a flower in a meadow,” she said. “They don’t pick it. They look at how it responds and moves with the light, what’s around it. Western scientists will pick it, remove it from its context and bring it to the lab to look at its molecular structure. I don’t think one way is better than another, but I want students to understand both perspectives.”

Mashford-Pringle hopes Indigenous ways of knowing, particularly about the land, could help to heal the relationship between people and environment. 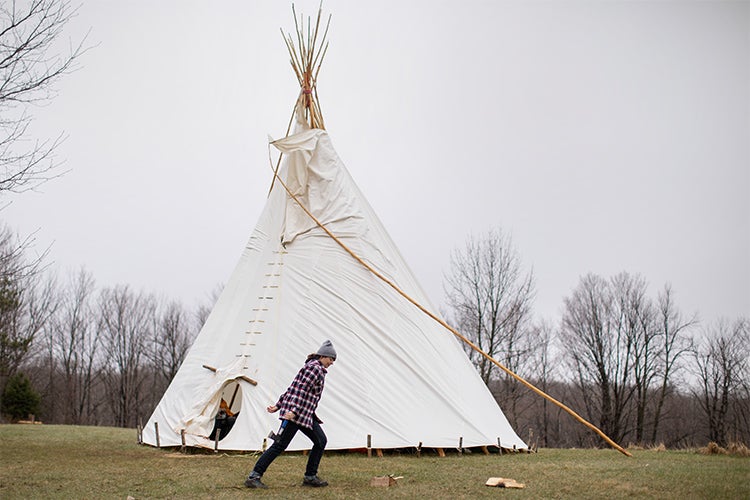 “If we’re not going to talk about how you as a person connect to this land, it’s worthless,” says Mashford-Pringle

“How do we start to get people to think about planetary health without beating them over the head?” she asked. “Telling you to go touch a tree, walk on grass or meditate in front of a lake, none of these practices has a carbon footprint, and they are all deeply healing. Can you open up enough to see Indigenous ways of knowing and healing as a possibility? People have opened up to Traditional Chinese Medicine. Can they do the same for Indigenous healing? We find they can.”

Land-based learning is not officially a part of Dalla Lana’s response to the Truth and Reconciliation Commission recommendations. But leaders of the Waakebiness-Bryce Institute see it as an important step to teach the next generation of public health professionals about Indigenous trauma from an Indigenous perspective.

It’s “a stepping stone, part of the healing we need to do between Indigenous people and DLSPH. There’s a ton of racism and discrimination in our health system,” said Mashford-Pringle.

“Public health touches every area of the system. We need to get people in to help reduce the racism in our system. That’s going to be very healing.”

This article is part of the Dalla Lana School of Public Health’s 2018/19 Annual Report. For more highlights, check out the full report.