Hancock lecture at U of T's Hart House: “Land and Life in Tkaronto” 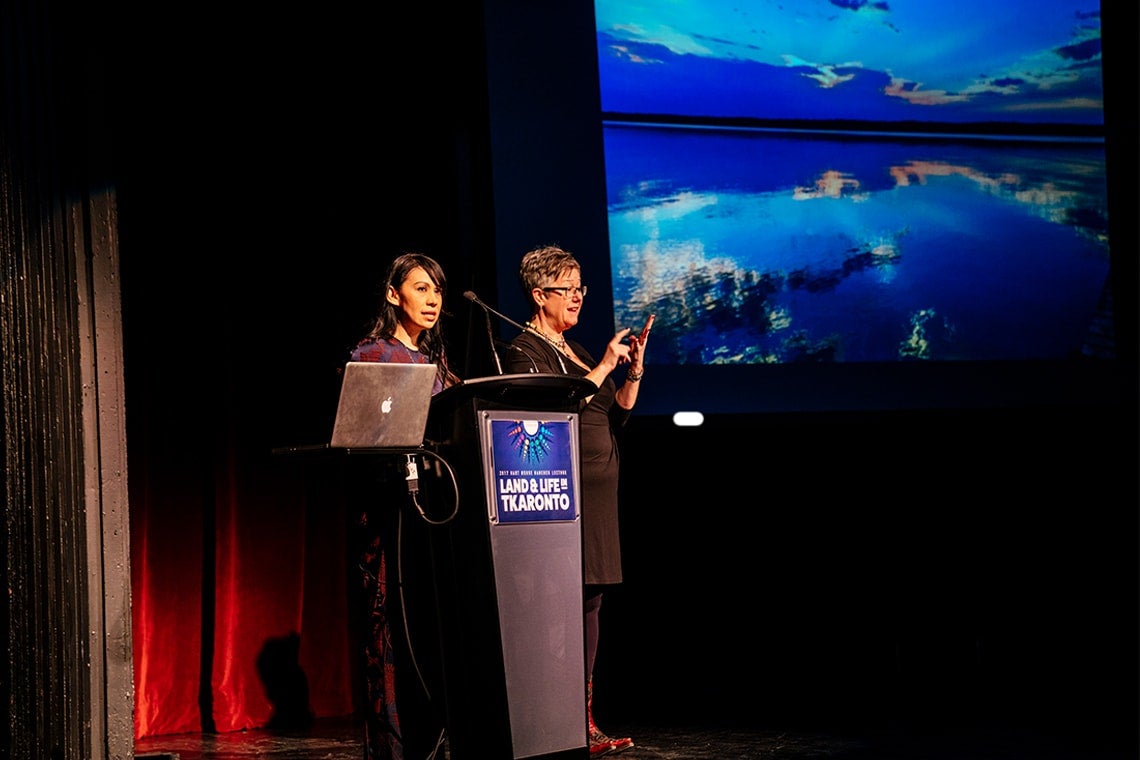 Susan Blight (left) was the keynote speaker at this year's Hancock Lecture, exploring the intimate link between language and land. The speech was translated by a sign language translator (photo by Jiduo An)

Susan Blight’s love affair with Anishinaabemowin began four years ago when she started to intensively study her language.

That inspired the visual artist, filmmaker and activist to begin work to reclaim and rename streets and landmarks around Toronto. It’s all part of the Ogimaa Mikana Project, she co-founded with a friend.

Read about the project in Muskrat Magazine

Central to the project, Blight said, is reminding non-Indigenous people that they are on Indigenous land and that Indigenous people still live here. And it’s a way of reaching out to other Anishinaabe people to make them feel at home in the city.

“When I talk about the project, I also have to talk about Indigenous languages and the connection of language to Indigenous resurgence,” Blight said. “This is important because a city – with all of its signage and emblems of the dominance of the settler colonial system – can alienate Indigenous people.”

Blight, who works at U of T’s First Nations House as Aboriginal student life coordinator, gave the keynote speech at the 2017 Hancock Lecture.

She spoke about Toronto as home to first peoples for thousands of years. And she used the opportunity to talk about how Toronto – or Tkaronto – needs to revisit its Indigenous history, its relationship to the land and its relationship with Indigenous peoples who live here today.

“The revitalization of Anishinaabemowin is a push back against the settler colonial system in Canada,” Blight said.

Blight’s clan is Snapping Turtle, she is a member of Couchiching First Nation, but her ancestors come from Couchiching, Naicatchewenin, Mitaanjigamiing and Mishkosiminiziibiing.

She said that while Toronto is often known as the “most multicultural city in the world,” what is less known is that 37,000 Indigenous people live here, and that Indigenous peoples “including the Haudenosaunee, the Wendat and the Anishinaabe – have been here for more than 15,000 years.”

That lack of awareness has been changing, she said, ever since 2012 when the Idle No More grassroots movement began in reaction to alleged legislative abuses of Indigenous treaty rights by former prime minister Stephen Harper and his government.

“Non-Indigenous people are becoming increasingly aware of Indigenous presence, their complicity in settler-colonialism and their responsibility toward decolonialization,” she said.

And new solidarities are emerging.

“In 2016, we were witness to unprecedented levels of Black and Indigenous solidarity,” said Blight, adding that Black Lives Matter Toronto and Indigenous activists made room for one another at protests.

Solidarities like these mean there are new opportunities for people to work together towards shaping a new future, she said.

“We will be building upon a base of respect and reciprocity set into motion by Indigenous nations over thousands of years, a base informed by Indigenous space-place concepts. And, one that forges meaningful alliances for a better future for all.”

Hart House will be podcasting the 2017 Hancock Lecture in the coming weeks.