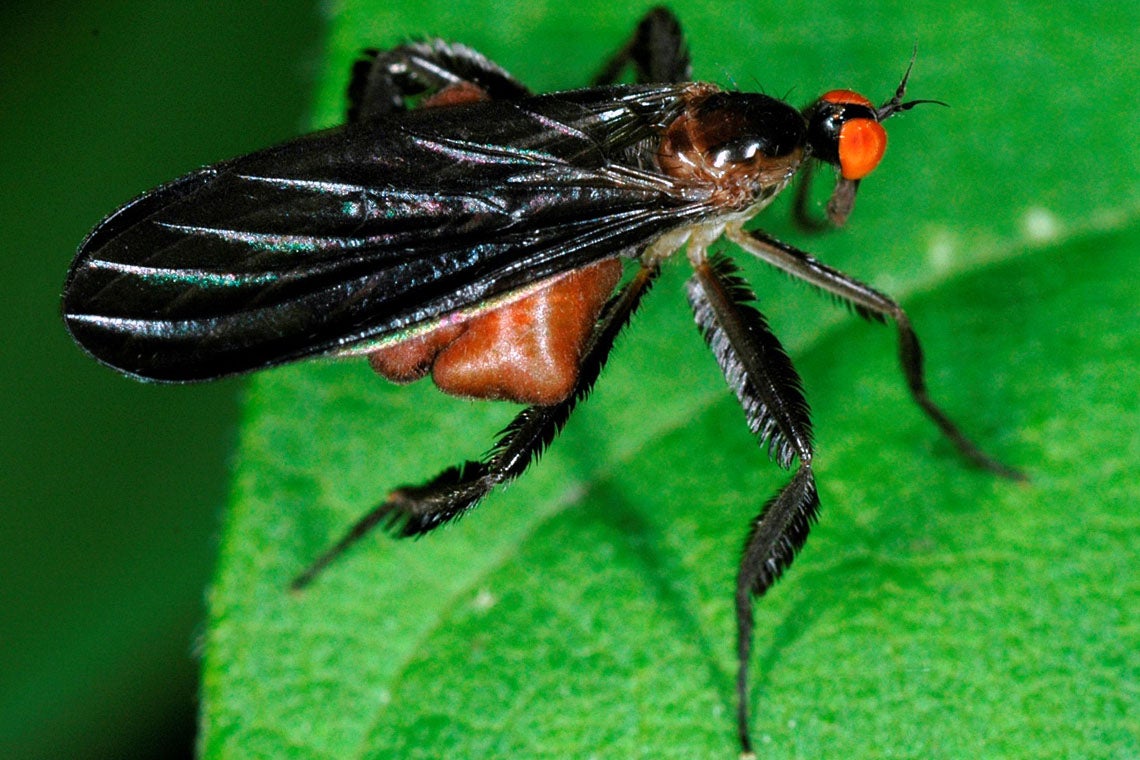 In dance flies, some females use their hairy legs and inflatable abdominal sacs to make themselves appear bigger – and more attractive – to potential partners

When it comes to the mating game, it’s true that size does matter for North American male dance flies, who are most attracted to mates who display the largest inflatable abdominal sacs, says Rosalind Murray, a post-doctoral researcher in biology at the University of Toronto.

Murray’s research, published last week in Proceedings of the Royal Society B, focuses on one of the rare insect species (Rhamphomyia longicauda) in which the female partner displays sexual ornamentation to attract mates to fertilize her eggs. It is much more for common for males to display ornamentation, because doing so requires energy. The female generally devotes this energy to producing eggs and parenting. Murray and researchers from U of T Mississauga and the University of Stirling in Scotland explored the attractiveness of two sexual ornaments common among North American female dance flies: inflatable abdominal sacs and leg scales. She and her colleagues demonstrated that larger, inflated abdominal sacs are the most alluring to the males of the species. Leg scales are important to mates only if the female in question has a small abdomen – and among this population, the males prefer females with larger leg scales.

The experimental research to discover male mating responses to female ornamentation took place during field tests on an island in the Credit River, near Glen Williams, Ont., over a 10-day period. Murray created models of female fly silhouettes from plastic transparencies, varying the abdominal size and leg size separately. Five models at a time were hung on fishing line and positioned at the mating swarm site. Swarms occurred daily at dawn and dusk and involved large numbers of both males and females. As a swarm began, Murray and her colleagues observed and recorded each approach a male fly made to one of the silhouettes.

Murray says there are two theories about why large sexual ornaments have developed among the female dance flies. The large abdomens and leg scales may honestly signal that the females have the most or largest eggs and are the best bet for the male to father the most offspring. Alternatively, they may serve as a symbol of sexual conflict between the sexes: All of the females want to attract males, but large abdominal sacs and/or large leg scales may be deceiving males about the number and size of eggs available for fertilization within a female.

Why do female dance flies go to such extreme lengths to attract males? Each time he mates, the male provides the female with gifts of food that allows her to nourish her eggs. As a result, the females might mate more frequently during the mating period than the males.

These findings are of particular interest because they shed light on what controls sexual differences in the animal kingdom, says co-author Darryl Gwynne, a professor of biology at U of T Mississauga.

“The males are generally the showy sex and the females are usually the ones who are choosy about mates, so this species is one of a handful where the roles are reversed in mating behaviour,” he says. “This research will help us to understand why the sexes are so different.”

The study was partly supported by the Natural Sciences and Engineering Research Council of Canada.