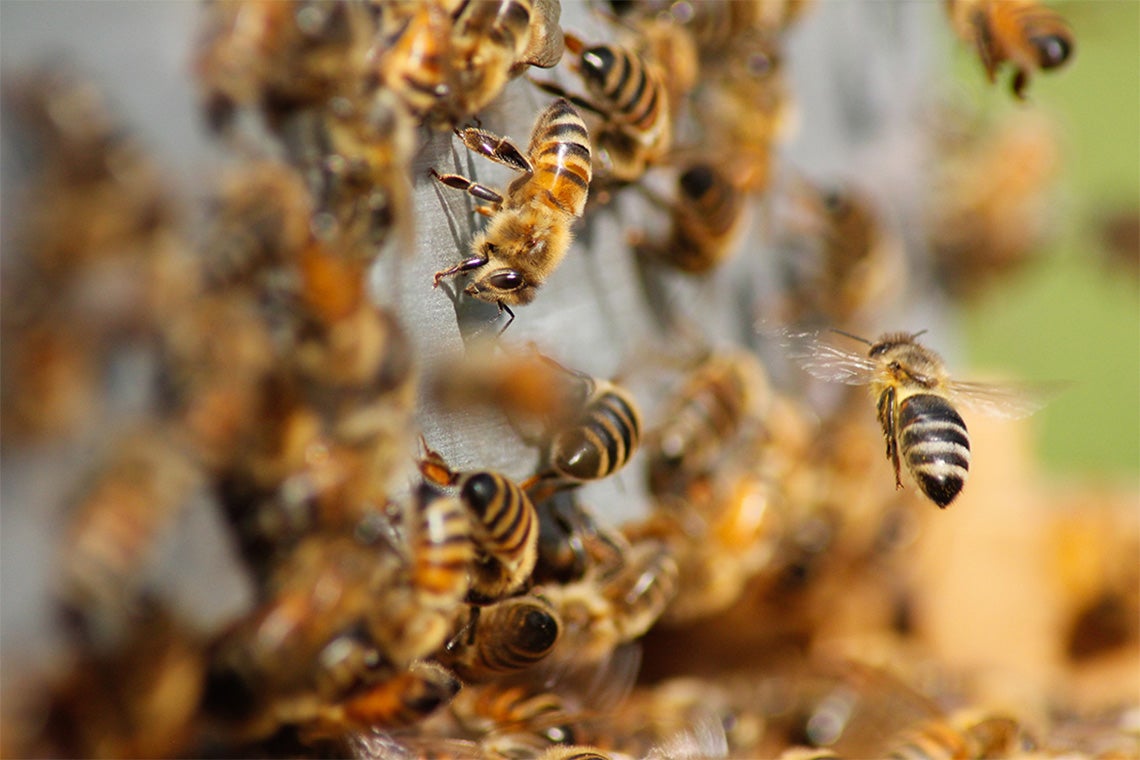 (photo by Damien Tupinier via Unsplash)

Honeybees identify strangers in their midst using signals from the bacteria in the intruder’s digestive system, an international team of biologists has found.

The research, published recently in Science Advances, contributes to broader questions about the tools social animals use to distinguish between insiders and outsiders in their community.

“This idea of how an individual knows another individual, how they recognize whether they're like themselves or not, is a mystery,” says Professor Joel Levine, chair of biology at U of T Mississauga and one of the paper’s authors.

Many animals distinguish members and non-members of their pack, herd or flock using visual cues, scents, behaviours, genetic relationships and other factors.

Bee colonies, with their sophisticated, hierarchical structures, “are the best show in town when it comes to sociality,” Levine says.

The social insects take on different roles, including tending the queen, caring for young, cleaning the hive, building honeycomb, collecting nectar and pollen and producing honey. Bees have no trouble recognizing the other members of their hive. But should invaders from another nest try to infiltrate, guard bees quickly identify the stranger and attack.

The research team was interested in how that identification happens. Earlier research had eliminated differences in genetic code as the main mechanism.

“It's a very common beekeeping technique to take newly emerged bees from a strong colony and dump them into a weak colony to make that weaker colony stronger,” says Cassondra Vernier, a biologist at Washington University who developed the microbiome theory at the heart of their research. “Those bees will actually grow up in this new colony that they're not genetically related to. And they will develop the cue that matches that colony. The bees of that colony will recognise them as nestmates.”

Vernier theorized that bee-belly bacteria might hold answers. She hypothesized that, in the close proximity of hive life, bees would exchange bacteria, creating a common “microbiome” across the colony.

She shipped frozen bee remains from her laboratory in St. Louis, Mo. to Mississauga, Ont., where Levine and Joshua Krupp, a research associate, analyzed variations in the insects’ microbiomes. They confirmed that bees from each colony shared common gut bacteria, distinct from those from other hives. In addition, the distinct microbiome changed the type of pheromones the bees produced. Hive members exude a unique combination of chemicals, making a kind of signature that other bees can sense — likely through a combination of taste, smell and texture.

The researchers are cautious about assigning human-like abilities to bees’ perceptual capacities. In some ways, the us-and-them behaviour in the bee world has more in common with the way immune cells identify and attack invaders than the way thinking organisms treat outsiders. But there’s still much to learn about the boundaries between chemical and social reactions.

“We’re a long way from making an argument that an individual bee is a self-conscious, sentient being,” says Levine. “But we’re not so far from saying that these guys know something about each other, and that they're making decisions based on that knowledge when they interact. Does that have evolutionary implications that may affect how we understand other species all the way up to and including humans? I would say absolutely. But can we say yet how it's going to shake out? No way.”

The research received support from the Canadian Institutes of Health Research and the Natural Sciences and Engineering Research Council, among others.