The great word hunt: U of T expert is helping to put a little more Canada in the Oxford English Dictionary 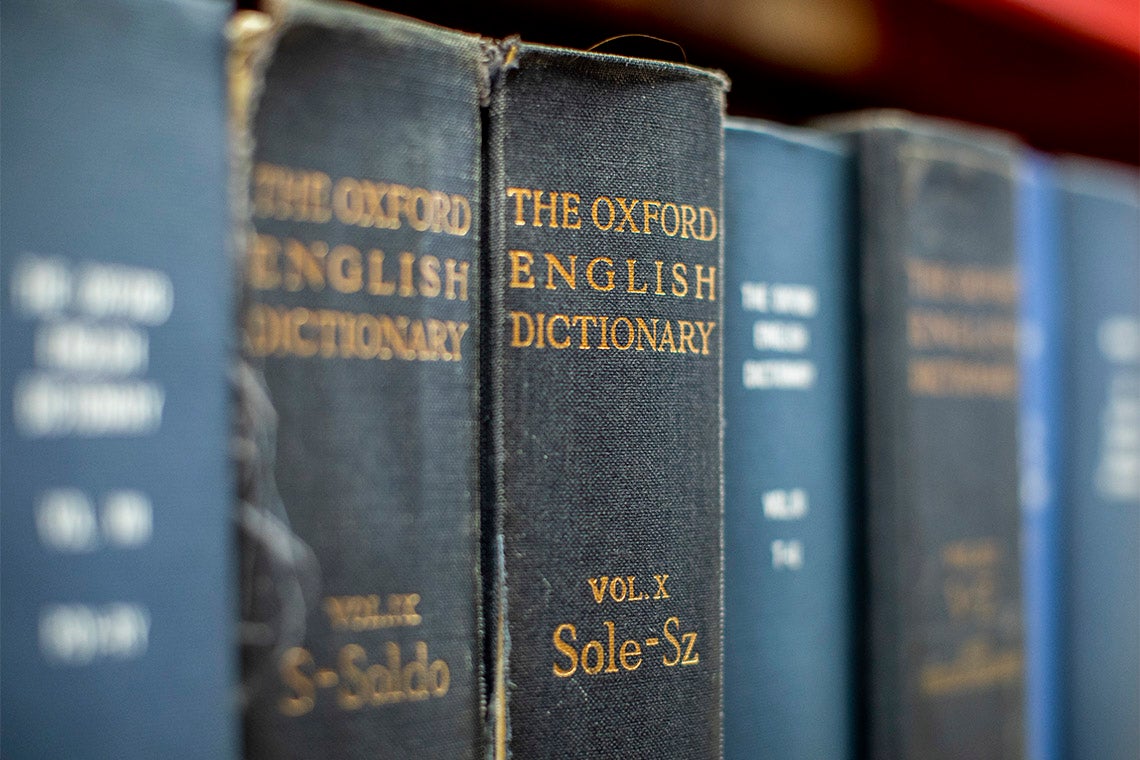 With more than 600,000 words in the Oxford English Dictionary, how many of these would you expect to be Canadian? Six thousand? One thousand?

The OED staff know their coverage of Canada falls short, so, earlier this year, they teamed up with Sali Tagliamonte, a U of T professor of linguistics. Tagliamonte is reviewing words and phrases from her research, and, with the help of one of her graduate students, is compiling a list of candidate words for the OED.

For a decade, Tagliamonte has been visiting small towns north and east of Toronto to conduct and record interviews – to study how people in these communities talk. Through these conversations, she has identified words, phrases and senses of words that have gone previously undocumented.

She learned that a “goer,” for example, is a spirited child. And that in Timmins, Ont., “miner’s mouth” refers to someone who swears a lot.

Having grown up in northern Ontario, Tagliamonte knew that a “soaker” is what you sometimes get when you step in a deep puddle or snowdrift. The word exists in the OED, but the Canadian sense does not appear among the definitions, which include “a drunkard,” “one who soaks something” and “a drenching rain.” Tagliamonte thought everyone knew her childhood meaning of the word – until she started her research. “You live in the north, there’s always deep snow in winter. Your feet get wet; it’s a soaker.” Turns out it’s a Canadianism.

She also knew that “a suck” is a whiny or sulking person. And a “bush party” occurs when friends gather in the woods around a campfire to drink and talk. These senses aren’t in the OED either.

Tagliamonte plans to submit these words along with dozens of others to the OED for consideration. To give the dictionary’s editors a sense of how frequently they’re used (which will help determine whether they will be included), she’ll provide counts for how many times each term appears in every 10 million words. “Many of them are very infrequent,” she says.

According to Katherine Connor Martin, the head of lexical content strategy for Oxford University Press, the dictionary team looks for new words – and assesses how meanings of existing words are changing – mostly by reading national newspapers and other major publications. This makes it difficult to track word use in more isolated rural areas, in specific neighbourhoods or among particular ethnic groups. “Because those words are not as visible, we rely on linguists such as Sali who are working with these language communities,” she says.

To be recorded as Canadian, Martin says, a word must be “overwhelmingly associated with Canada,” or have originated here. Some words become Canadian even though they came from elsewhere. “Parkade,” for instance, originated in the U.S., but is now chiefly used in western Canada and South Africa.

And even if a word itself is not Canadian, one of its meanings can be. An “atom,” for example, is a fundamental particle of matter, but in Canada, uniquely, it also refers to a level of sport for children.

What further complicates matters for the OED is that many Canadian words aren’t used across the country: You’re unlikely to hear anyone outside of Saskatchewan call a hooded sweatshirt a “bunnyhug.” And only in Quebec is a convenience store a “dep” (derived from dépanneur.)

“Words don’t follow national boundaries,” says Martin. “Some do, but a lot of them don’t.”

Establishing whether a word is Canadian is one matter, deciding if it gets into the dictionary is another. According to Martin, the editors assess the length of time the word has been in use (several years is usually a minimum) and its frequency of use over time.

The OED also takes into account where the word comes from, since words from smaller populations of speakers (such as Canada) won’t be used as frequently overall as those from larger ones (such as the United States).

Martin, who is American, encourages University of Toronto Magazine readers to contact the dictionary through Twitter or its website with words they think might be unique to Canada. “Anyone can give us their Canadian words,” she says.

Bargoon: A great bargain. “There’s a playfulness about it, which is nice.”

Gong show: Like “amateur hour” or “a chaotic situation.” “Even though it was an American television show, folks in the U.S. don’t say that.”

Keener: An especially eager student. “I like it because it’s both a more accurate way of describing that kid in your class at school, but also slightly kinder than some of the words that we would use in American English.”

Toonie: A Canadian two-dollar coin. “This is wonderfully inventive, combining ‘two’ and ‘loonie’ (which is itself a charming word for a dollar coin). Blended ‘portmanteau’ words can sometimes be grating, but this one works well.”

Vinarterta: A cake consisting of thin alternate layers of shortbread and a cardamom-flavoured filling made from prunes, plums or other dried fruit, typically eaten during the holidays. “This word entered Canadian English via Icelandic immigration to settlements such as Gimli, Man. Interestingly, the cake itself has evolved differently in the two countries, so that nowadays Canadian vinarterta and Icelandic vinarterta are a bit different.”

This story originally appeared in University of Toronto Magazine.